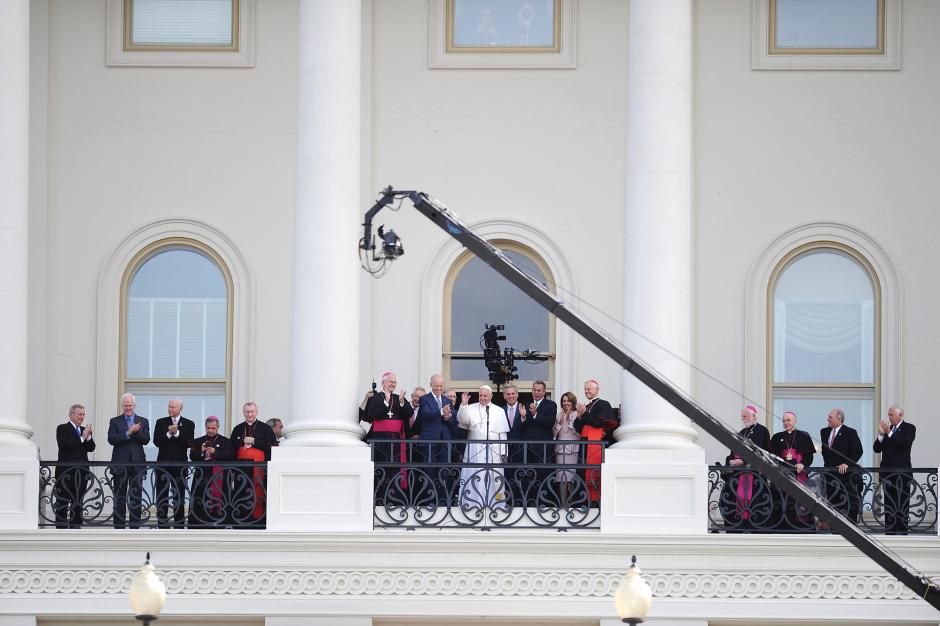 Courtship Between Church and State

In September 2015 Pope Francis I made history by addressing a joint session of the United States Congress. His address to the U.S. Congress was historic for several reasons. Not only is he the first pope to speak before the bicameral legislature, but also his actions call into question the American concept of separation of church and state.

American Founders, such as Thomas Jefferson, James Madison, et al., were well enough acquainted with European history to know that they wished to found a government “without a king and a church without a pope.”

The Roman Catholic Church had been so heavily involved in European politics for centuries that anti-Catholic sentiment ran strong among citizens of the founding era. Such sentiment continued to exist throughout American history, demonstrating itself in the burning of Catholic churches during the early 1800s in what some scholars have termed “the Protestant Crusade.”1 Anti-Catholic political sentiment was manifested in the mid-1800s through the Know-Nothing Party (later renamed as the American Party). By the early 1900s, opposition to Roman Catholicism in politics was notably evident in the defeat of presidential candidate Alfred Smith, who was the first Catholic to run for president.

It was not until the 1960 presidential election of John F. Kennedy that Roman Catholics began to be accepted into mainstream American life, both socially and politically. Kennedy’s bid for the White House faced strong opposition from Protestant clergy, who were concerned with whether his allegiance would be to the pope or to the American republic. This became known as “the religious question” during the presidential debates. After addressing a joint gathering of Protestant clergy in Houston and dismissing any fears of hidden loyalties to Rome, Kennedy went on to win the election and become the first Roman Catholic president. Kennedy’s actions on “the school question”—whether Catholic parochial schools should receive public tax dollars or not—demonstrated his commitment to upholding the concept of separation of church and state: he disallowed public taxes to support Catholic private education. However, his actions infuriated American Catholic bishops, who turned decidedly against him—a stance still held by the current United States Conference of Catholic Bishops (USCCB).2 Perhaps all Catholic legislators can glean some wisdom from John Kennedy, who was a widely popular president while in office.

About three decades later the Roman Catholic Church played a pivotal role in the fall of Communism in Europe. Allying itself with U.S. secret intelligence forces, dubbed by Time as “the Holy Alliance,”3 both the church and the U.S. overthrew a common threat, resulting in the freedom for the church to achieve its mission in society and the advancement of democracy. However, in retrospect, one may ask whether the CIA was utilizing a powerful religious entity to overthrow a political rival, or whether it was being used as one of the leading political powers in the modern world to accomplish papal aims.4 U.S. Secret Service agencies, recognizing how much power and influence the Catholic Church wielded through the fall of Communism, closely monitored Pope John Paul II every time he visited America.5

Against such a historic backdrop, Pope Francis I is certainly attempting great things on behalf of the Roman Catholic Church. News analysts such as David Gibson in the April 30, 2015, article of the Religion News Service identified six items that were likely on Francis I’s agenda before the U.S. Congress.6 His list includes: welcoming immigrants, battling economic inequality, fostering strong families through economic justice, protecting the environment, fighting partisanship in politics, and promoting dialogue rather than ideology.

Immigration and a Republican Legislature

Since the current legislature is composed predominantly of conservative Republicans, Pope Francis I may have a hard sell on some of his views. On the issue of immigration, the pontiff encouraged Congress to take a more receptive stance toward immigrants, many of whom come from Latin American countries and who are Roman Catholics. Support for the immigrant population in America could affect votes at the polls and help America to become a predominantly Roman Catholic country. Right now analysts estimate that 24 percent of Americans identify themselves as Roman Catholic.7 Maybe the Vatican coat of arms will one day fly over the White House and U.S. Capitol instead of the ISIS banner, as some radicalized Muslim extremists have threatened. This may seem a foolish comparison, but it is the far more likely of the two.

Regarding economic issues, Francis I supports Catholic social concepts of distributism to foster a more just economic society. Distributism favors the distribution of private ownership of property among the greatest number of citizens possible. In this regard, it differs from socialism, which seeks to eliminate private property. Also, distributism does not seek to eliminate the state structure of society.8 Therefore, those embracing distributism frown upon a capitalistic society, seeing it as evil and fostering greed. Legislators got some candid remarks from the austere Francis I regarding economic disparity and some chiding for monetary greed.

Francis I expressed to the U.S. Congress some of the concerns contained in his recent encyclical, Laudato Si’, which denounces the destruction of the environment solely for material gain. In light of statistical information that shows the United States ranks second among those nations producing the largest amount of carbon dioxide emissions9 and is the country of origin of several oil magnates renowned for destructive oil spills, the pontiff delivered some stinging words of correction.

In view of the history of an embattled Congress in recent years, Francis I promotes dialogue and the need to avoid partisanship in politics. For those American Catholics who support political views that run contrary to church teaching, Francis I reminds them that God should come first, even before political views. In essence, the pontiff is encouraging Catholic politicians to live their faith in public office, the very issue that Kennedy decided not to do, since his public office required him to uphold the U.S. Constitution.

Regarding church-and-state issues, some would argue that Pope Francis I is merely fulfilling his political role as an ambassador from the Vatican City State. However, others would argue that the pontiff also serves as a religious leader of a particular faith group. For a comparative argument, Native American Indian land, often referred to as the “rez” (reservation), is recognized by the U.S. Government as independent and sovereign territory. How often have Native American religious leaders been allowed to address a joint session of the U.S. Congress to express their concerns regarding deforestation of tribal lands (some of which are sacred sites) that have been exploited merely for monetary gain by American logging companies? How often have tribal leaders been allowed to address our nation’s legislature regarding poverty-stricken and destitute living conditions on the reservation?

The formal establishment of political ties with the Vatican has been contentious from the time of President Franklin Roosevelt, who first attempted to assign a U.S. ambassador to the Vatican in 1933. Roosevelt’s efforts were decried by the populace and rejected outright, based on the principle of separation of church and state. By the 1980s Ronald Reagan had fostered favorable ties with the Vatican and accomplished what no other president could do—formally recognize the Vatican as a legitimate state by assigning to it a U.S. ambassador. Through such ties the Reagan administration was able to facilitate a working relationship with Rome that resulted in the fall of Communism. However, the singular point of contention from a church-state perspective is that every U.S. ambassador to the Vatican must be a Roman Catholic approved by the Papacy, a fact known by few Americans. In 2009 the Vatican informally rejected Obama’s nominees, an action described by the Italian national paper Il Giornale as a “trial of strength between Barack Obama and the U.S. church that involves the Holy See.”10 Why should Roman Catholicism receive such favor above all other religious groups? And one should ask a far more serious question: Why do American citizens not realize the struggle between a foreign religious entity and our national government whose outcome will directly impact the future direction of our country and our civil liberties?

An additional point of grave concern from a church-state perspective regards official, diplomatic agreements with the Holy See. Vatican Council II (1962-1965) promised great reforms within the church and with regard to its extra-ecclesial relations. While many changes did occur, the church did not alter its standard practice of establishing formal ties with other states. Historically, these agreements were referred to as concordats.11 Typically, they not only formalized political relations between the Vatican and other states, but also included provisions for the favoring of the church and its adherents, especially in those states where Catholics were the majority. Provisions varied from one concordat to another, but usually guaranteed recognition of the Catholic Church as the one true religion and some form of state support for Catholic schools and churches. Most often, such support was public tax dollars being given to those schools and clergy immunity from civil proceedings.

Regarding the former practice, perhaps America is gradually adopting this custom through school vouchers? Regarding the latter practice, clerical immunity was based on the superior role claimed by the church in society: priests were considered above civil law and courts, instead being tried by ecclesial courts in cases of criminal allegations. Thus far, American society retains its concept of religious neutrality that clerics (and Protestant pastors, or other religious leaders) are not exempt from civil laws and cannot be tried in purely religious courts in cases of criminal acts.

There is one other factor that makes Pope Francis I’s address to the U.S. Congress an historic event—yet American citizens and constitutional scholars voiced little, if any, opposition to it. One would expect that within a modern, liberal democracy such as America, which also champions religious pluralism and government benevolent neutrality toward religion, more groups would decry governmental violation of the separation of church and state. Previous generations of American citizens have shown great concern and care in protecting our civil and religious liberties. One must ask if that commitment continues; or why it has been set aside in this case.

2 “[Kennedy’s Houston speech] was sincere, compelling, articulate—and wrong. Not wrong about the patriotism of Catholics, but wrong about American history and very wrong about the role of religious faith in our nation’s life” (Archbishop [Charles] Chaput: “John F. Kennedy’s View of the Role of Catholic Faith in Public Service Was Wrong,” speech given at Houston Baptist University, Mar. 2, 2010, Houston, www.catholic.org/politics/story.php?id=35640 [accessed Aug. 5, 2015]).

4 “Today, in the opening years of the twenty-first century, no one hears of Vatican secret services like the Holy Alliance. In the world of contemporary espionage the papal secret service (both espionage and counterespionage) is dubbed The Entity. Whatever it is called, its guiding principles are the same as they were when Pope Pius V created the body in the year of our Lord 1566. Defense of the faith, defense of the Catholic religion, defense of the interests of the Vatican state, and complete obedience to His Holiness continue to be the four great pillars that will carry it into the far reaches of future history. As long as the Catholic Church continues to spread its faith to the ends of the earth, The Entity will continue to pursue any enemy that may appear in the path of the supreme pontiff or his policies. Meanwhile, to this day, the Vatican state continues to deny that its espionage service exists” (Eric Frattini, The Entity, trans. Dick Cluster [New York: St. Martin’s Press, 2008]), p. 351.

Edwin Cook has a doctorate in church-state studies from the J.M. Dawson Institute at Baylor University. He writes from Waco, Texas.