Race and Liberty in America 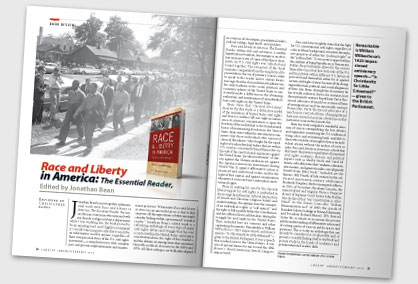 Jonathan Bean has put together a phenomenal work with Race and Liberty in America: The Essential Reader. For me, an African-American who interned with my church's religious liberty department while I was studying law, the book proved to be an amazing read, and I highly recommend it. I would state unequivocally that it would be an informative read for anyone, regardless of their own personal views of the U.S. civil rights movement—a complex history with complex past and present implementation and maintenance processes. What makes Race and Liberty in America an unrivaled piece is that it duly surpasses all the expectations of what one might consider finding within a pronounced "essential reader." Jonathan Bean's edited work is a refreshing anthology of every type of major civil rights debate and struggle that has ever occurred within the United States: antislavery, constitutionalism, the right of free markets, and the debates on immigration that consumed the public political discourse in the 1850s and 1970s. All these subtopics are brilliantly aligned in a mosaic of documents, presidential orders, judicial rulings, legal briefs, and speeches.

Race and Liberty in America: The Essential Reader, within title and substance, is neither hyperbole nor bombast, but emerges as an absolute treasure trove of some of the finest documents on U.S. civil rights ever collected and bound together. The raw power of this book emanates completely from the simplicity of its presentation: the use of primary sources alone to speak to the reader and to convey Bean's message: that the classical liberal tradition was the only tradition in the social, political, and economic spheres of the United States to consistently make a difference in the obtaining, realization, and maintenance of an individual's basic civil rights in the United States.

Bean states that "classical liberalism" deserves further study as a distinctive model of the realization of United States civil rights; and that it is neither left nor right in nature, since its primary concentration is upon the freedom of the individual as the foundational factor of maintaining freedom in the United States. Bean states within his introductory comments that those individuals who espoused classical liberalism—who fought for the equal rights of each individual before the law within U.S. society—consistently found themselves on the side of the constitutional arguments against the United States "peculiar institution" of slavery, against the Chinese exclusion act, against the Japanese-American internment during World War II, against affirmative action as practiced and understood today, and for the right of free capital, and against unionization whenever it restricted one's individual constitutional rights.

Bean, in making his case for the classical liberal support for civil rights, is unabashed in discussing the influential cultural intersection of Jewish and Christian religious beliefs and understandings. He explains how the concepts of an individual's rights as "self-owned," and the right to full equality before the Constitution and law, affected classical liberalism during the struggle for civil rights in the United States. Thus, included here are sermons and other captivating documents. Remarkable is William Wilberforce's 1823 impassioned antislavery speech—"Is Christianity So Little Esteemed?"—given to the British Parliament. It was a speech that reached even to the United States. It was also of special interest to me to read the 1954 Brown v. Board American Jewish Congress amicus brief.


Race and Liberty rightly states that the fight for U.S. constitutional civil rights, regardless of color or ethnic background, was never the exclusive property of either the "political right" or the "political left." It was never trapped within the confines of being Republican or Democratic. Rather, Bean brilliantly allows for the sources themselves to portray how both sides of the U.S. political divide within different U.S. historical periods found themselves either for or against certain civil rights stances because of the changing intellectual, political, and social allegiances of their day. Bean, through the documents he has vividly collected, shows, for instance, how the nineteenth-century Republican Party (historical advocates of much less restricted form of immigration) and the nineteenth-century Democratic Party (historical advocates of a much more restricted form of immigration) have now arrived at an ironic about-face on this particular issue in the present day.

Bean has truly compiled a wonderful selection of sources exemplifying the best debates and arguments concerning the U.S. tradition of being a free and welcoming land, available to those who wish for a fair right to live as an individual citizen without the anchor of caste or color. Race and Liberty in America is a book that duly meets the previous superlatives of renowned civil rights academic, literary, and political experts such as Shelby Steele and Carol M. Swain—who duly notes that "students, educators, civic leaders, and general readers can all greatly benefit from [this] book." Included are the famous 1852 Fourth of July oration by the celebrated nineteenth-century abolitionist Frederick Douglass; the first inaugural address, in 1861, of President Abraham Lincoln; the immortalized and singular Plessy v. Ferguson dissent of Supreme Court Justice John Harlan, who declared that "our Constitution is color-blind" to the Dawes Law—the "Indian Emancipation Act" of 1887; the speech of President Calvin Coolidge at Howard University; and President Richard Nixon's 1971 Revised Order No. 4, which set in motion the present public understanding of affirmative action and of setting quotas of races in public spaces and positions. This is truly an anthology that can already be considered as irreplaceable and, at present, is readily finding itself as textbook and private study in the hands of academics and private interested readers alike.

Reviewer Christopher Banks is currently studying for a Ph..D. at Oxford, England.