Sacked for the Seventh 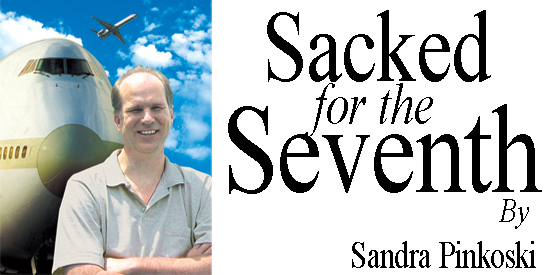 In the United States of America we often use slogans such as "truth, justice, and the American way" (last phrase in the opener for the 1950s television show Superman) and "with liberty and justice for all" (the closing phrase of the Pledge of Allegiance). These idealistic phrases can lull us into believing religious injustice happens primarily in developing countries—certainly not here in the "land of the free." But the "land of the free" became the "home of the brave" for a former Pueblo, Colorado, air traffic controller when he was fired for adhering to his religious convictions and found himself defending them in federal court. It all began in 1990 when Don Reed, whose study of the Bible convinced him that the fourth commandment prohibits work from sunset on Fridays until sunset on Saturdays (Exodus 20:8-11), began setting that day aside for worship and rest. In 1995 Reed's employers told him they could no longer accommodate his absence during Sabbath hours, as a result of what they termed "critical short staffing."

The reason for staffing being so short in May of 1995 is explained in an article he wrote shortly after he was fired: "Since Hof [his supervisor] was not able to eliminate this controller [Reed] via any performance issue, he would have to force him to choose between his continued employment—his career—and his religious faith. So, after eliminating two employees and having another hardshipped out, Hof then approved the transfer of two more controllers to take facility staffing down to seven. This was two below the minimum required staffing of nine. The Pueblo Memorial Airport had previously been authorized 14 controllers and was now down to seven."

About the short staffing situation, Larry Halpern, a fellow controller at Pueblo who represented Reed for the National Air Traffic Controllers Association (NATCA) in 1995, said, "Pilots who depend on the Pueblo facility for proficiency and training, including many military units, will be forced to go elsewhere or forgo any meaningful flying experience until the staffing situation can be resolved."

"Why in the world, when you have problems staffing a facility," wrote Reed in his article, "would you fire someone whose job performance is satisfactory in every way? Whatever dispute the FAA has with any individual controller ought to be resolved in a manner consistent with sound management principles as it relates to the agency's primary mission, which is the safe, orderly and efficient flow of air traffic in and around the nation's airports and through the national airspace system."

Two previous control tower managers had no problem with Reed's request for Sabbath hours off, but a third manager, George Hof, called Reed's convictions a "scam." Under such hostile working conditions, the inevitable happened that summer—he was scheduled to work six Saturdays. When he didn't show up on each of the Saturdays involved, Reed was subsequently fired. He had been working in the Pueblo control tower for more than five years.

Reed persevered in pleading his case and, after many disappointments, finally sued in Denver's U.S. district court in 1998. His case was brought before a jury on July 10, 2001.

Testimony from Reed included various solutions that both he and his union local had submitted to his employers regarding the Sabbath difficulty. These included swapping shifts, working extra comp time, rearranging his own schedule and volunteering to work every Sunday and every holiday—all of which were rejected.

Closing arguments on the four-day trial were heard on July 16 and on July 17—coincidentally, Reed's forty-fifth birthday. The jury of two women and six men unanimously decided in Reed's favor. He was awarded damages, back pay, and front pay amounting to $ 2.25 million.

"It was never my intention to go to court," Reed told Liberty magazine firmly. "This was a situation that was resolvable, but they [FAA] refused to see it—they just never got it—they left me no other choice."

Reed was awarded $ 248,356 in back pay, $ 508,088 in future lost pay, and $ 1.5 million in compensatory damages for emotional pain and suffering. At this point you're probably not feeling too sorry for Reed; but here's where it gets interesting. In 1991 Congress enacted a law "prohibiting" punitive damages and "limiting" compensatory damages against the federal government to $ 300,000.

"This means," Reed said, "that the award for damages—$ 1.5 million—was immediately reduced by $ 1.2 million. What is even more outrageous is that the jury was prohibited from knowing about this $ 300,000 limit. Had they known, they would probably have awarded more in either the back pay or future pay areas. The remaining amount awarded will be taxed at approximately 50 percent, which means the final amount will be down in the vicinity of $ 500,000." Reed added, "So who really won? The government—the object of the suit—gets most of it."

Reed said that even now, after judgment has been handed down, the FAA continues to insist that they are in the right regarding the issue, though it is not known at the time of this writing whether the FAA will appeal. "But how is this any different than Tim McVeigh or any common criminal who refuses to admit guilt or show any signs of remorse once all the evidence has been heard and a verdict has been rendered?" Reed asked. "Will the United States government not hold accountable their own managers, whom they have empowered to conduct the affairs of this nation's business, when they so sorely abuse that power?" In light of the possibility of appeal, Reed commented that the jury's decision is "not so much the end of the matter as it is the 'vindication' for us in this case and for all those who have a 'sincerely held belief.'"

"This case is a chance," Reed said, "for the nation to see that we are, in America, free to hold our beliefs and to worship our Creator, as opposed to 'just doing what we're told and keeping our mouth shut.' We are told how we are to treat our employers," Reed said, referring to Colossians 3:22, "but it's just sad that they [FAA] pushed the issue this far.

"I don't want people to think this is all about me—it's not. It's about lifting up the name of Jesus and glorifying the Father and His commandments, which are not burdensome," Reed concluded.

An interesting element of this case is that the lawyers arguing the case for Reed will not receive a penny for their work. The Denver firm of Isaacson, Rosenbaum, Woods, and Levy agreed to argue the case free of charge for the American Civil Liberties Union (ACLU), which originally filed the suit. If the presiding U.S. district judge Hon. Edward Nottingham awards attorneys' fees, they will be given to the ACLU and used for other civil liberty cases. According to Reed's attorneys, fees are estimated to be in excess of $ 100,000.

The Seventh-day Adventist Church's news network (ANN) picked up the story and on July 24, 2001, published the following: "Mitchell Tyner, an associate general counsel for the Adventist Church worldwide, welcomed the jury's verdict, saying that employees should rarely be forced to choose between their faith and their job, and only when accommodation would cause genuine hardship to the employer.

"Each year, Tyner participates in as many as 30 lawsuits involving on-the-job religious discrimination, usually related to Sabbathkeeping. He says the scope of the problem is much larger than most people realize.

"Every day, on average, two or three Seventh-day Adventist Church members in the United States lose their jobs or are denied jobs because employers will not accommodate Sabbath observance, says Tyner. 'Free exercise of religion is a fundamental legal principle, but in practice, legal protection for people of faith in the workplace is simply not adequate.'

"He cautions that even when an employee wins a jury verdict, employment cases have the second highest reversal rate of any type of case, and that large damage awards are often subject to remittitur, or subsequent reduction by the court.

"Tyner, who has twice litigated religious discrimination cases against the FAA, says the Adventist Church will file an amicus brief in support of Reed should the FAA appeal the outcome of the case."

Currently Reed, father of four, works with AT&T Broadband in Pueblo, Colorado. "He's been with AT&T for a little more than a year now," Reed's wife, Robin, stated. "AT&T has never given him any trouble about taking Sabbath hours off," she said.

Former members of the Worldwide Church of God and the United Church of God, Reed and his wife now worship with fellow "like-minded" believers in various seventh-day Sabbathkeeping "home" churches in Colorado.