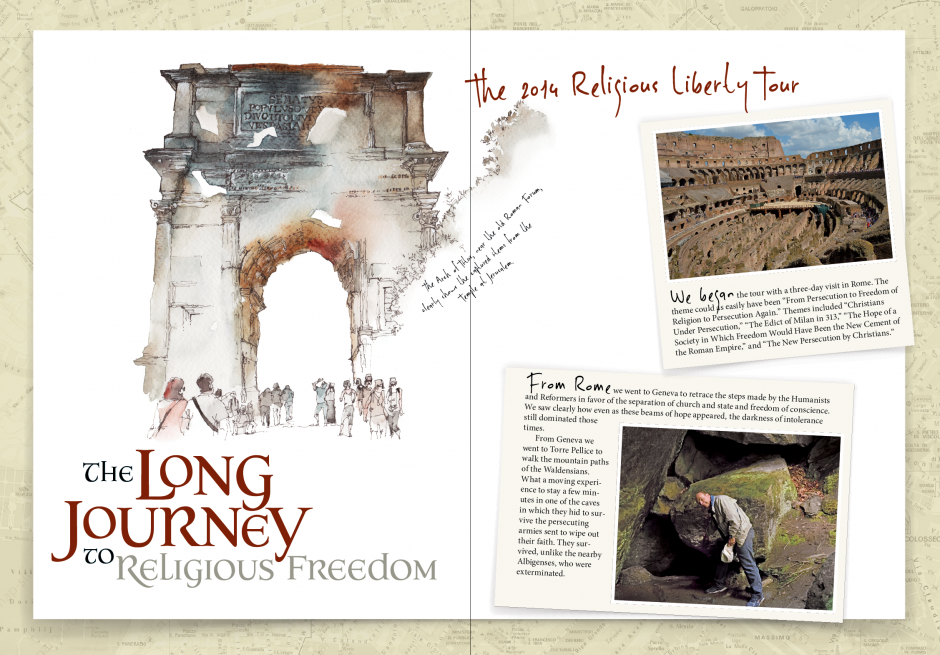 The Long Journey to Religious Freedom

Every promoter and defender of religious freedom should once in a while visit a few historical sites related to the struggle. It will inspire them. This is what two dozen curious “pilgrims” transported on a big black tour bus did for for two weeks throughout Italy, France, and Switzerland.

We began the tour with a three-day visit in Rome. The theme could as easily have been “From Persecution to Freedom of Religion to Persecution Again.” Themes included “Christians Under Persecution,” “The Edict of Milan in 313,” “The Hope of a Society in Which Freedom Would Have Been the New Cement of the Roman Empire,” and “The New Persecution by Christians.”

From Rome we went to Geneva to retrace the steps made by the Humanists and Reformers in favor of the separation of church and state and freedom of conscience. We saw clearly how even as these beams of hope appeared, the darkness of intolerance still dominated those times.

From Geneva we went to Torre Pellice to walk the mountain paths of the Waldensians. What a moving experience to stay a few minutes in one of the caves in which they hid to survive the persecuting armies sent to wipe out their faith. They survived, unlike the nearby Albigenses, who were exterminated.

Then we crossed the Alps and drove through the south of France to Montpellier on a search for the story of the French Huguenots. Both the Waldensians and the Huguenots had a common ground: They were persecuted for several centuries, and their only plea was freedom of conscience and religion. In France, during a period of two centuries, hundreds of thousands of Protestants were forced to leave their country.

We visited the Tower of Constance in the beautiful medieval city of Aigues-Mortes, built by King Saint Louis. The story of Marie Durand has become a symbol of all those who were oppressed, arrested, and executed for their faith. She was a teenager when arrested in 1730. Her brother Pierre was a pastor, and as the authorities did not find him, they arrested his sister. Two years later they caught him and hanged him in the public square. But Marie stayed in the Tower until 1768. She did not recant, and wrote on a stone the word “résistez,” which means “resist.”

From there we went to the “Musée of the Desert.” It is located in a beautiful Huguenot village. We visited the house of one of the leaders of the Camisards, who fought during two years against King Louis XIV’s armies.

The tour wrapped up in Paris where we picked up the story of freedom as it moved from the Saint Bartholomew’s Day massacre in 1572 to the Universal Declaration of Human Rights adopted on December 10, 1948, less than one mile from the Eiffel Tower. Religious freedom is a precious and fragile gift. A gift we have to promote and protect. Tours like this remind us of the high price so many paid and continue to pay for freedom to practice their faith. We have an obligation to keep on in our work in their memory.