The Two Tables of the Law 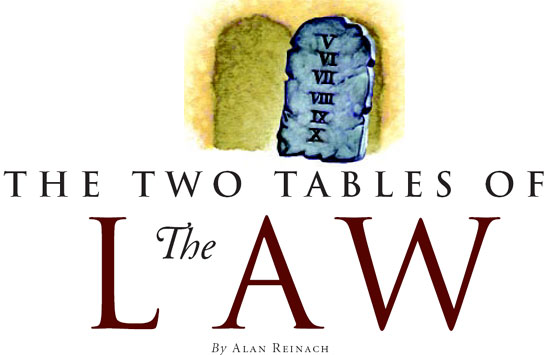 For centuries Protestants have found a convenient division between the first and second tables of the ten-commandment law. Roger Williams, the founder of Rhode Island, was the first American to associate two concepts: the separation of church and state and the two tables of the law. It was Williams, not Thomas Jefferson, who coined the phrase about a hedge, or wall, separating the garden of the church from the wilderness of the state.

Williams also conceived that the first four commandments, or the first table of the law, addressed one's obligations to worship God, while the last six commandments, the second table, addressed one's civil obligations. The American Protestant concept of separation of church and state was largely built on this distinction. Thus state law could properly address moral issues such as adultery, stealing, and murder because these were in the second table of the law.

However, Puritan era "first table" laws against blasphemy, idolatry, and even Sunday laws fell into disfavor, not merely because of secular trends, but because in the Protestant conception, these obligations pertained not to the state but to God alone.

This division between the first and second tables of the law roughly corresponds to the distinction between legislating religion and morality. Under the First Amendment, the state has not jurisdiction to address essentially religious questions, such as when, where, how, or whom to worship. The first table of the law is out of bounds to the state. However, the second table of the law has always been the subject of civil law, despite the familiar adage that "you can't legislate morality." Actually, you can, and we do. The debate is never really about whether to legislate morality, but to what extent and from what source.

Under the American constitutional system, the state has no charge to order public morality according to the second table of the ten-commandment law, but neither is the state compelled to reject the second table. It is entirely legitimate for Americans to invoke the commandments in public policy debate, so long as the distinction between the first and second tables is observed. The Constitution does not permit the state to arbitrate religious belief and practice or to promote specific religious ideas. This means that the same Ten Commandments that many Americans look to for the content of public morality may be subject to constitutional restrictions when it comes to state efforts to publicly display and honor them. Although many view restricting the display of the commandments as official disrespect, it is far better for government to maintain a strict "hands-off" policy with respect to religion than to open a Pandora's box of public promotion of religion.
____________
Alan J. Reinach serves as vice-president of the North American Religious Liberty Association West, which has published "Written in the Heart," a guide and poster regarding the Ten Commandments, available at www.religiousliberty.info.
________________________