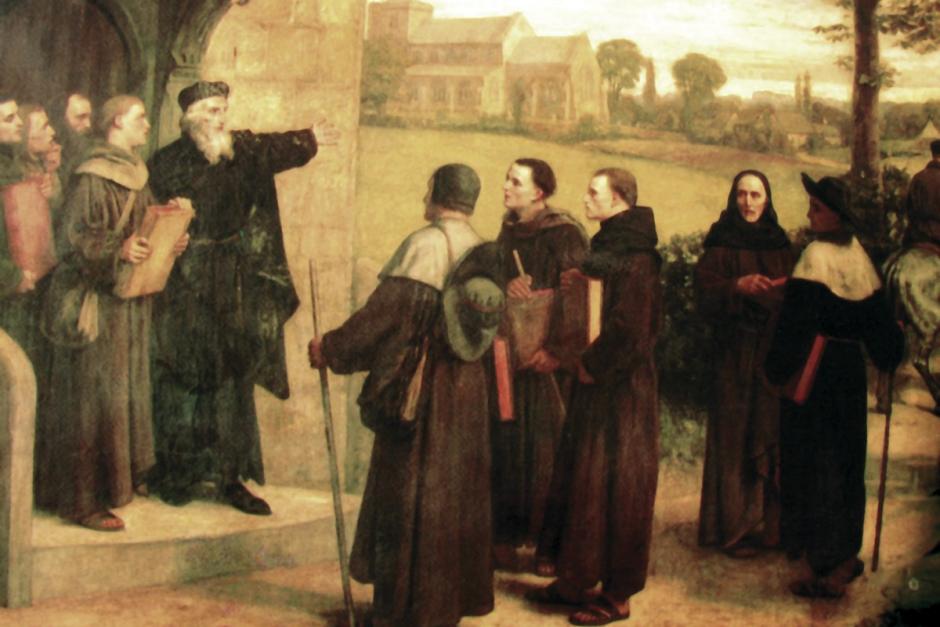 A Catalyst of Reform

In 1382 John Wycliffe, an Oxford don, was summoned before Archbishop Courtenay to defend himself against charges of heresy. Then an earth tremor shook Lambeth Palace. Each side claimed it was God’s displeasure upon the other. Church leaders were ready to condemn Wycliffe with a list of 10 tenets that were dubbed simply as “heresy.” His writings were placed under the ban.

At the same time historians note that his ideas “provided the most formidable intellectual challenge to the Western church in the later Middle Ages.”1 At a time when the boundaries of heresy were not well defined, what is remarkable is just how much Wycliffe threatened authorities. What was even more earthshaking than the Lambeth trial were his ideas.

What made Wycliffe’s ideas so dangerous was his appeal to the authority of Scripture. There were numerous attempts to silence him during his lifetime. His followers, described pejoratively as “Lollards”2 were pressured to recant. Some did. Those who remained did so at the peril of their lives. Three decades after his death church leaders gathered at the Council of Constance (1414-1418) to condemn his teachings. At that time they condemned Jan Hus, who they claimed taught the same heretical teachings as Wycliffe. Both were condemned to the stake. The first immediately at the council, the latter by later ceremoniously digging up his body, burning it, and removing it from consecrated ground.

So what would cause such a strong reaction on the part of ecclesiastical leaders toward a man who had died decades earlier? In order to better understand and appreciate his extraordinary life, we must explore his early beginnings.

Little definite information is known about Wycliffe’s early years. His family name comes from a Yorkshire village, Wycliffe-on-Tees where his family owned land. At approximately age 12 he came under the jurisdiction of John of Gaunt, one of King Edward III’s sons (who as uncle to young King Richard II influenced the throne for a time), and with whom Wycliffe’s life would be so closely intertwined.

Wycliffe spent most of his time at Oxford University. Historians debate precisely when he was born, but conservative estimates indicate that he most likely was 15 when he began his studies in 1345.3 This was at a time when universities were a relatively new phenomenon, largely the result of the growth of cities. The earliest appeared in cities such as Paris, Bologna, and Oxford. A student would be required 14 years of study to matriculate through the Faculty of Arts.4 Wycliffe spent most of his life here. He was “widely recognized as the most brilliant teacher of his time in both philosophy and theology.”5 In particular, he was noted for his erudition and unflinching logic (without a sense of humor).

For a time Wycliffe gave up academic pursuits on behalf of service for the crown. These were crucial and uncertain times for England. French was then the language of the elite. In fact, it was not until 1362, while Wycliffe was still at Oxford, that English became the official language of the courts. It was not until the end of his lifetime that English became the primary language of elementary schools, including children taught at Oxford.

Another significant background influence is the fact that this was a time when the Papacy was divided. Such division advanced French interests at the expense of England, which only created further resentment and resistance toward the papal hierarchy. A series of English statutes (1351, 1353, 1363) sought to limit papal influence in England. One way they expressed their angst was to curb any appeals to courts outside of England and to prohibit the election of ecclesiastical positions independent from the pope.6

Within this milieu English authorities welcomed arguments by Wycliffe about the nature of lordship or dominion. He expressed these in two major works, On Divine Dominion and On Civil Dominion. In these works he argued that all legitimate dominion comes from God. It is characterized by the example of Christ who came to serve, not to be served. Any lordship used for personal profit or gain on the part of the ruler rather than for those who are governed is not true dominion. It is usurpation. The same thing holds true for any dominion, no matter how legitimate, which expands its power beyond the limits of its authority. Even ecclesiastical authorities must be sure to collect taxes for the spiritual benefit of their parishioners. Any extension beyond this purpose was simply illegitimate.

In light of the fact that English authorities constantly quarreled with the Papacy, it meant that issues related to the temporal authority of the pope along with matters of taxation quickly became flashpoints. It is therefore no surprise that English civil authorities found Wycliffe’s teachings extremely useful to them. Such conflicts led to an English delegation in 1374, during which time Wycliffe went along with other representatives.7

Wycliffe insisted that the same limits for religious authorities should apply in the same way to secular authorities. This had unfortunate consequences for Wycliffe, who found himself increasingly alienated from civil authorities. Even John of Gaunt, who exercised his influence to protect Wycliffe, increasingly distanced himself from Wycliffe. Some of his teachings grew more radical. For example, he taught that the true church of Christ was not the pope and his visible hierarchy, but was, instead, the invisible body of Christ predestined to salvation (a point he no doubt drew from Augustine of Hippo). While it is impossible to know precisely who is predestined, he did indicate that God’s elect can be inferred from their fruits. The implication was simple: ecclesiastical as well as political leaders, unless they showed fruits in their lives, were reprobate!

It was from this point of reform that Wycliffe insisted upon a return to the authority of Scripture. Only the church can interpret the Bible correctly, he believed. “But this church that owns scripture is the body of all who are predestined,” notes historian Justo González, “and therefore the Bible ought to be put back in their hands, and in their own language.”8 This simple logic led Wycliffe to argue for the translation of the Bible from the Latin Vulgate into English. While historians debate precisely to what extent, what is clear is that Wycliffe paved the way for the translation of the Bible into English—a task that occurred mainly after his death. Such translation work of religious works and Scripture into the vernacular was not a unique phenomenon. A century earlier King Alfonso the Wise of Castile ordered the Bible to be translated into Spanish (a process that resulted in the Biblia alfonsina). Thus Wycliffe represented a wider milieu of reform as well as a wider impulse to translate sacred writings into the vernacular.

In 1377 the theology of Wycliffe came under increased scrutiny and attack. It was in that year that Pope Gregory XI issued five bulls against him: one sent to King Edward III and the others to the University of Oxford, the chancellor, the archbishop of Canterbury, and the bishop of London. Wycliffe was declared a heretic by many at Oxford, and was even briefly incarcerated. Yet his prestige was such that he was allowed to continue his study and writing.

Increased pressure led him to retire to his benefice as rector of the parish church at Lutterworth. The fact that he had earlier received such a gift from the crown in gratitude for his service demonstrates the degree to which such practices permeated the life of the church, even among a reformer such as Wycliffe.9 It is important to note that it was the proceeds from this ecclesiastical appointment that made his academic career possible. It formed a basis of financial security. Even later on in life, when he needed more cash, he exchanged this appointment for a less productive one and a sum of money.

Yet it was Wycliffe’s views about the presence of Christ during Communion that caused the greatest amount of controversy. At the Fourth Lateran Council (1215) the Roman Catholic Church affirmed the doctrine of transubstantiation, the idea that the elements of the bread and wine become the actual body and blood of Jesus Christ, which became official church dogma. In his treatise On the Eucharist Wycliffe saw this as a denial of the principle manifested in the Incarnation. When Christ became human, He did not destroy humanity. Instead, what takes place in Communion, according to Wycliffe, is that the body of Christ (while indeed present) does not destroy the elements. He argued for a sort of “sacramental” understanding that emphasized the “mysterious way” through which the body of Christ is present in the Communion service, not just the physical bread.

Wycliffe died from a stroke in 1384. Despite five papal bulls and repeated attempts to stifle his voice, he managed to survive. Part of this was because he had powerful friends, such as John of Gaunt, who came to his aid to protect him. It was partly because of extraordinary circumstances, including English nationalism and the schism that weakened the Papacy.

Still the greatest legacy on the part of Wycliffe was the inspiration he provided to translate the Bible into English. Within a decade of his death the first-ever English translation of the whole Bible appeared. Subsequently known as the “Lollard Bible,” it appeared in two versions.10 After all, it had been the urging of Wycliffe that the Bible be returned to the people. “This English Bible enjoyed notable success . . . as evidenced by the many manuscript copies that survive.”11

His followers preached God’s Word to the people. They continued on a path of reform. Pastors should avoid civil offices. Worship of images, clerical celibacy, and pilgrimages were unnecessary. Transubstantiation and prayers for the dead were rejected. Such tenets were uncanny precursors to the much later Protestant Reformation so defined by Martin Luther. It is no wonder that Wycliffe is referred to as “the morning star of the Reformation.”

As a populist movement Lollardism was difficult to squelch. Many were condemned to death. Yet later on it was among the Lollards that the ranks of Protestantism swelled within England.

2 The word “Lollard” comes from the Dutch lollen (“to mumble”) and signifies a vagabond or religious eccentric. It should be noted that the closeness of the link between Wycliffe and his Lollard followers is debated, although some recent historians are increasingly sympathetic about this connection.