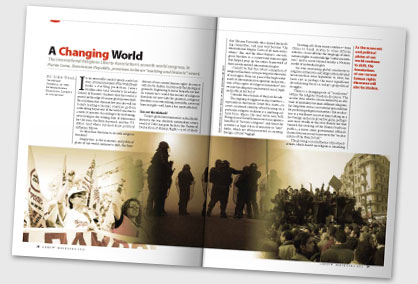 In an unusually candid speech early last year, a former president of the World Bank made a startling prediction. James Wolfensohn told Stanford Graduate School of Business students that the world is poised on the edge of a major global power shift. He told them that the next few decades will see today’s leading economic countries go from controlling 80 percent of the world’s income to a mere 35 percent. According to his reckoning, we’re living in the waning days of dominance for the euro, the British pound, and the U.S. dollar. And where currency leads, political influence follows.

So what does this have to do with religious freedom?

Simply this: as the economic and political plates of our world continue to shift, the foundations of our current human rights discourse will also be shaken. And already the ideological ground is beginning to move beneath our feet. In tomorrow’s world the model of religious freedom we now take for granted—religious freedom as an overarching, inviolable, universal human right—will have a less inevitable feel.

Toss out The Rulebook?
Today’s global environment is radically different to the war-shocked, nationalism-weary world of 1948 that gave birth to the Universal Declaration of Human Rights—a set of ideals that  Eleanor Roosevelt, who chaired the drafting committee, said may well become “the international Magna Carta of all men everywhere.” She, and the other framers, saw religious freedom as a cornerstone human right that helped prop up the entire framework of these newly minted international rights.

Could it be that this robust conception of religious freedom is now passing into the realm of nostalgia? Have we passed the high-water mark of international recognition and protection of the rights of religious minorities? Are we now heading into unchartered social, legal, and political territory?

Consider these trends of the past decade:

The ongoing struggle in many countries—especially in the former Soviet bloc states—to assert a national identity, often focusing on a particular religious tradition as a unifying cultural force. Hence, this year we’ve seen both Hungary and Kazakhstan move to recognize a handful of “historic religions” and limit the activities or legal status of minority or “new” faiths, which are often perceived as carrying foreign cultural baggage.

Growing calls from many countries—from China to Saudi Arabia to some African nations—to recalibrate the language of international rights to acknowledge “cultural relativism,” and to move beyond merely a Western model of individual rights.

An ever-increasing global sensitivity to religious extremism and religiously-motivated terrorism that, since September 11, 2001, has been cast as perhaps the most significant destabilizing force in today’s geopolitical struggles.

There is a changing role of “secularism” within the religious freedom discourse. The secular state, which is characterized by an attitude of neutrality between different religions, has long been seen as an essential precondition for protecting religious minorities. But secularism as a worldview is now at times taking on a less benign and more proactive guise, perhaps seen most vividly in the 2011 French law that banned the wearing of the Islamic burka in public—a move some government officials claimed was necessary to preserve the “secular nature of the French state.”

The growing social influence of postmodernism, which doesn’t see religion as something deserving “special protection,” but rather as just another “special interest group” within a milieu of competing moral and social voices.

Learning a New Language
Now, more than ever, we need to explore the forces that are gradually but relentlessly changing the way the international community understands, articulates, and protects religious freedom.

The seventh world congress of  the Inter­national Religious Liberty Association will be held April 24 to 26, 2012, in Punta Cana, Dominican Republic, and will bring together some of the world’s leading experts to examine the changing face of the religious freedom discourse.

Are we ready for a changing world? The days when we dreamed of a universal, consensus-driven “Magna Carta” of human rights may be behind us. But as we meet together next year in Punta Cana for the Seventh world congress, I hope we’ll learn new, more effective ways to speak the language of freedom in today’s complex, rapidly changing global environment.

The IRLA’s seventh world congress, to be held April 24-26, 2012, in Punta Cana, Dominican Republic, is open to everyone who wishes to deepen his or her understanding of current issues and challenges in the world of religious freedom advocacy.

The International Religious Liberty Association invites you to be a part of this historic event. More than just an academic conference, this three-day congress will offer practical resources, stimulating presentations, and the opportunity to interact with a truly global group of experts, government officials, religious leaders, and advocates. The venue itself is unique—the Barceló Bávaro Beach Resort and Convention Center is one of the Dominican Republic’s most beautiful, all-inclusive, beachside resorts.

The seventh world congress website, www.irla.org, has all the information and links you need to register for this event and plan your visit to beautiful Punta Cana. Or send your questions to us at info@irla.org.