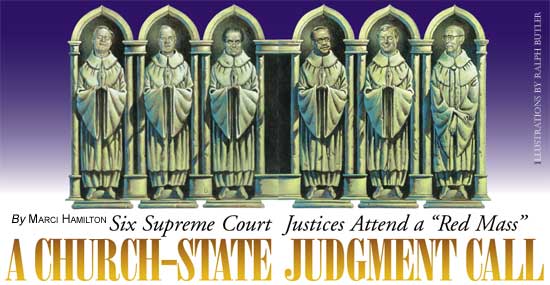 On Monday, October 1, 2007, six Supreme Court justices attended the 54th Annual "Red Mass" at the Cathedral of St. Matthew, and there is reason to feel some unease with respect to their presence at the event.

No political candidate or judge gives up their First Amendment protections simply by election or appointment. Public officials continue to have a right in their private capacity to believe what they choose, to practice the religion of their choice, and to speak as they wish. The reasonable requirements of their jobs, however, can place restrictions on their ability to use their office to further their religion or beliefs, or to speak against their office or the best interests of the country. In this arena, at least, the difference between public and private makes quite a difference.

There is no good reason to criticize the Roman Catholic Church for attempting to communicate its views to as many in Washington as possible—that is its right in an open republican democracy. However, there is good reason to question the judgment of the justices who attended: Chief Justice Roberts and Justices Scalia, Kennedy, Thomas, and Alito, who are Catholic, and Justice Breyer, who is Jewish. Attending the Red Mass is a legislative, executive, and Court tradition, but it is hardly a mandatory event, as the absence of Justices Stevens, Ginsburg, and Souter attests.

A Homily Expressing an Opposition to Church-State Separation
The homily, or sermon, was delivered by Archbishop Timothy Dolan of Milwaukee. Archbishop Dolan characterized the event as an opportunity "to rejoice in a mutually enriching alliance between religion, morality, and democracy." But what he meant, of course, was that we should rejoice in an alliance between a particular religious denomination, Catholicism, and the government. This was no celebration of religion as a general matter.

The Washington Times reported that Archbishop Dolan alluded to such issues as abortion, euthanasia, cloning, and human sexuality in his homily and asked the Holy Spirit to descend upon U.S. judicial leaders. He was obviously using this public moment to remind those in power of the church's position on hot-button issues. I have no criticism of him for doing so—only criticism for those jurists who would attend and bring their impartiality into question.

There Is Much the Justices Should Have Learned in the Aftermath of Gonzales v. Carhart
University of Chicago Law School professor Geoffrey Stone has been pilloried for pointing out that all five of the justices deciding Gonzales v. Carhart, which upheld a late-term abortion ban with no exception for the health of the mother, thus essentially overruling prior precedent, were Catholic. However, Stone's detractors doth protest too much; considering the justices' religion on this particular issue and suggesting it might have had relevance to their analysis was absolutely reasonable. The archbishop's persistent veiled references to the Catholic Church's stance against abortion reinforces the fact that in our public consciousness the institution is linked inextricably to the issue.

Granted, having five Catholics on the Supreme Court does not necessarily add up to a voting bloc, because in the United States most Catholics are "cafeteria Catholics" who choose their beliefs individually and not by adhering solely to institutional instruction. Still, the tone and tenor of the majority opinion in Gonzales had to make any clear-minded individual pause. It is hard to identify another recent opinion where the justices went further out of their way to defer to highly suspect, and probably erroneous, legislative conclusions on factual issues in order to overturn prior precedent. Moreover, the opinion set a new low in its embrace of paternalistic reasoning. The decision may have been defensible on some ground, but the way the opinion was written does open the majority to attack along the very lines Stone outlined.

I have no interest in reliving the Stone- Gonzales brouhaha, and only raise it to note that it should have put the justices on notice to tread carefully when it comes to religiously freighted issues that they have the duty to resolve from a secular, law-based point of view.The five Catholic justices have to be aware, after the fallout from Gonzales, that questions have been raised about their ability to separate their judicial judgment from their religious belief. After all, Stone is hardly the only person to raise such concerns. They were triggered earlier when Justice Alito's mother declared that he would do what the church required on abortion, and when various commentators noted that a majority of the Court now belong to a single faith.

Federal Jurists Must Avoid Not Only Impropriety, but Also Its Appearance

Importantly, the burden rests on the justices to avoid the appearance of impropriety, not just impropriety itself. Ethical canons carefully note that jurists must take both into account, and for the Supreme Court especially, the public perception, as well as the reality, of fairness and impartiality is crucial.

Thus, even if not one of the attending justices took to heart the pointed reminders in the archbishop's homily regarding church doctrine on matters that might well appear before them, their presence at the Mass and its content still should raise questions for any number of Americans. After all, President Kennedy did not ignore the concerns that were raised over his faith, and in particular the question whether allegiance to the pope would interfere with his service as the president of the United States. Rather, he made clear to all that, consonant with his duty to uphold the Constitution and particularly its establishment clause, he simply would not take marching orders from Rome. 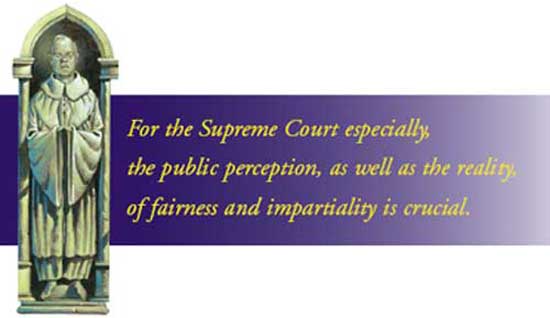 This is not a free exercise question, of course; the justices, like all of us, have the right to worship as they choose. However, the Red Mass, it is important to note, has a prominent and intentional political component. Indeed, no part of Archbishop Dolan's homily was very far removed from the church's public political positions. He told the congregation that "participation in the Red Mass is a humble prayer for the red-hot fire of the Holy Spirit, bringing the jurists, legislators, and executives of our government the wisdom to recognize that we are indeed made in God' image. . . and then to give them the courage to judge, legislate, and administer based on the consequences of this conviction: the innate dignity and inviolability of every human life, and the cultivation of a society of virtue to support that belief." This choice of language plainly, if implicitly, referenced church positions on topics such as abortion and euthanasia that have and will continue to come before the justices.

Once again, this is no criticism of Archbishop Dolan's right to preach his church's beliefs, but it does raise the question of the propriety of the five Catholic justices attending the Red Mass, and attending it en masse. (I don't know what to make of Justice Breyer's attendance, except that perhaps he believed that a Red Mass is a generic affair, given the intended audience is all three branches of government; or perhaps he simply chose to express respect for his brethren by attending.) The Red Mass is a public affair intended to reinforce the ties between government and the church. It is one thing for elected representatives, who are inherently accountable to their constituents and the larger public good, to attend; it's quite a different matter when the independent judiciary does so.

(There is also the question of the wisdom of having Archbishop Dolan deliver a homily at a Red Mass, because he has not been the most ardent defender of the rule of law. In cases involving the Milwaukee archdiocese's culpability for clergy abuse, he has argued that the federal and state constitutions should protect the archdiocese against any liability, and played hardball with child sex-abuse survivors by moving to have their names made public in a case involving a particularly ugly predator, Father Siegfried Widera.)

The justices of the Supreme Court have a solemn duty to approach their docket with the dispassion and fairness of Lady Justice, who holds the scales of justice with her blindfold on. As Judge Roy Moore (who purchased a large granite rendition of the Ten Commandments and then placed them in the lobby of the Alabama Supreme Court) learned, no judge has the right to proselytize in a courthouse. Public officials, in other words, may not use the weight of their office to push their religious ideas or agendas on their constituents or litigants. Not only is this a First Amendment principle, but also a canon of ethics.

At the same time, they can certainly worship in their private capacity, attend church (or synagogue or mosque), and support their chosen religious organization. The five Catholic justices of the Supreme Court came perilously close to the line between their private beliefs and their public actions when they attended the annual Red Mass immediately preceding the start of their year's term.

No one is asking the justices to abandon their faith—least of all myself. Nor am I asking the justices to be anywhere near as publicly open and candid about the relationship between their faith and their job as was President Kennedy, though it might be illuminating if they were. What I am asking them to do is provide the public with greater reassurance that they view their judicial obligations as distinct from their religious obligations. Taking a pass on the Red Mass might well have done just that.

Marci A. Hamilton is a visiting professor of public affairs and the Kathleen and Martin Crane senior research fellow at the Program in Law and Public Affairs at Princeton University. Professor Hamilton's most recent work is God vs. the Gavel: Religion and the Rule of Law (Cambridge University Press, 2005), now available in paperback. Professor Hamilton's forthcoming book, which will be published this spring, is titled, Justice Denied: What America Must Do to Protect Its Children (Cambridge, 2008). First shared on Findlaw.com, this article has been enlarged and adapted by Marci Hamilton for our use.