A Clash of Rights 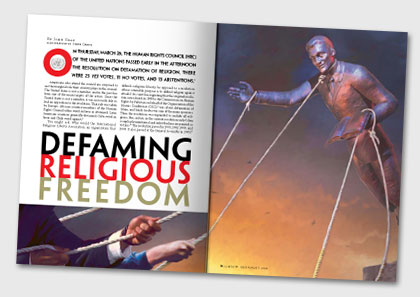 As the election season was building to a climactic finish, and opponents of California’s Proposition 8 publicly mocked claims that gay marriage would impact public school curriculum and religious freedom, the San Francisco Chronicle reported that a first grade class was taken on a field trip to attend the wedding of a popular lesbian teacher.1 This story demolished the credibility of Prop. 8 opponents and heightened fears of marriage supporters. Clearly, gay marriage was already having a demonstrable impact on impressionable young children.

Earlier in the year, National Public Radio, not exactly a bastion of right-wing hysteria, chronicled some of the major legal and legislative challenges to religious freedom posed by gay rights in general, and same-sex marriage in particular. The report declared:

“[S]ame-sex couples are beginning to challenge policies of religious organizations that exclude them, claiming that a religious group’s view that homosexual marriage is a sin cannot be used to violate their right to equal treatment. Now parochial schools, ‘parachurch’ organizations such as Catholic Charities and businesses that refuse to serve gay couples are being sued—and so far, the religious groups are losing.”2 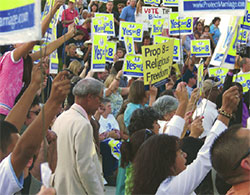 Rally for yes on Prop. 8 in Fresno, California.

This really gets to the core issue. It is one thing to claim the right to marry, and quite another to restrict the religious beliefs and practices of those who do not approve of same-sex marriage. The stories reported by NPR include both large institutions and small businesses. Catholic Charities shuttered its Boston adoption services when legislators refused to enact a conscience clause respecting its rights to refrain from placing children with same-sex couples. Yeshiva University’s Albert Einstein College of Medicine in New York City opened up its married student housing to same-sex couples after the state’s highest court ruled that its exclusion violated discrimination laws. In New Mexico, a wedding photographer was fined for refusing to provide services to a same-sex couple. And in a case being closely watched by religious groups around the nation, a Methodist camp meeting organization in Ocean Grove, New Jersey, has had a portion of its property tax exemption revoked for refusing to permit a same-sex couple to conduct a commitment service on its grounds.

The cases cited above scratch only the surface of the legal challenges to religious freedom, which are analyzed by some of the top legal and constitutional scholars in the nation in a new book: Same-Sex Marriage and Religious Liberty: Emerging Conflicts. One of the editors, Professor Douglas Laycock, a top First Amendment scholar himself, summed up the problem this way: “All six contributors—religious and secular, left, center and right—agree that same-sex marriage is a threat to religious liberty.” 3

The threat to religious liberty is even more acute in California, due to the legal landscape established by the California Supreme Court last year. As a general proposition, when rights conflict, courts engage in a balancing of interests, seeking to protect the rights of all parties, and weighing individual cases to determine how best to uphold these rights. The California Supreme Court effectively held that the right to be free of discrimination on the basis of sexual orientation trumps religious freedom.

The conflict arose in a case in which Christian physicians were sued for refusing artificial insemination to an unmarried lesbian patient, and instead, referred her to another clinic where she obtained the desired services. The court set up the case as a direct conflict of rights:

“Do the rights of religious freedom and free speech, as guaranteed in both the federal and the California constitutions, exempt a medical clinic’s physicians from complying with the California Unruh Civil Rights Act’s prohibition against discrimination based on a person’s sexual orientation? Our answer is no.” 4

Under long-established principles of constitutional adjudication, courts ordinarily approach these problems differently. Instead of declaring one set of rights preeminent, as the court did here, courts have engaged in a more rigorous analysis. The analysis begins by considering whether the application of a law or policy to the religious person or institution would cause them to violate a sincerely held religious belief. Once it has been determined that there is a genuine religious freedom interest at stake, the courts will inquire whether the state’s interest in restricting the religious practice is sufficiently important or compelling. We can assume that the state’s interest in eradicating discrimination on the basis of sexual orientation would be considered compelling. This sets up a genuine conflict of competing rights or interests, requiring the court to search for a way to reconcile these interests that has the least intrusive impact on religious freedom.

In the given case, the least restrictive means had already been accomplished. The Christian doctors had referred the patient to an outside clinic where she obtained the desired care. The doctors also claim they offered to pay any added expense incurred by the patient that insurance did not cover. It was not necessary, then, for the California Supreme Court to exalt the right to be free of discrimination on the basis of sexual orientation at the expense of religious freedom. It could have demonstrated respect for both rights. That it chose not to do so, but to devalue religious freedom, has alarmed churches and their lawyers not only in California, but nationally.

Canadian lawyer and keen observer of the battles over same-sex marriage in his country, Barry Bussey analyzed the prospects for a “live and let live” compromise between the religious and gay rights communities, in a chapter titled “The Marriage Debate: The Hidden Danger.”5 With an evenhandedness often lacking in these discussions, Bussey concludes:

“In the end, it is unlikely that moderation will prevail in either camp. Neither side seems ready to recognize that liberty of conscience cannot be secured for one group alone. The risk remains that the veneer of civility could be swiftly peeled back to reveal the persecuting spirit of those who know they are right, believe their issue is critical, and are convinced that coercion is worth the risk.” 6

Rally for Yes on Prop. 8 in Fresno. In a sign that such “persecution” is not merely theoretical, following the November election, opponents of Proposition 8 engaged in widespread intimidation of some who donated money to support Prop. 8, costing some people their jobs.

Writing in the L.A. Times prior to the election, Dean R. Broyles observed:

“[A] broad range of constitutional attorneys and scholars . . . affirm that this ‘rights’ clash is real. Marc Stern of the American Jewish Congress calls it a pending ‘train wreck’ or ‘Armageddon.’ In a chilling statement, Chai Feldblum, Georgetown University law professor and thoughtful gay activist who helps draft federal legislation related to sexual orientation, said that when push comes to shove and religious- and sexual-liberty conflict, ‘I’m having a hard time coming up with any case in which religious liberty should win.’” 7

If the NPR survey of cases is an accurate indication, the courts share Professor Feldblum’s views. Writing in the L.A. Times, Marc Stern expressed his concern about the prospect of protracted conflict between gay marriage and religious freedom:

“If past rulings are any guide, it is religious rights that are likely to be ‘obliterated’ by an emerging popular majority supporting same-sex relationships—and it seems unlikely that the California courts will intervene. That’s a shame.” 8

Alan J. Reinach, an attorney and director of the Department of Public Affairs and Religious Liberty for the Seventh-day Adventist Church in the Pacific Union (an area of several Western states), writes from Thousand Oaks, California.