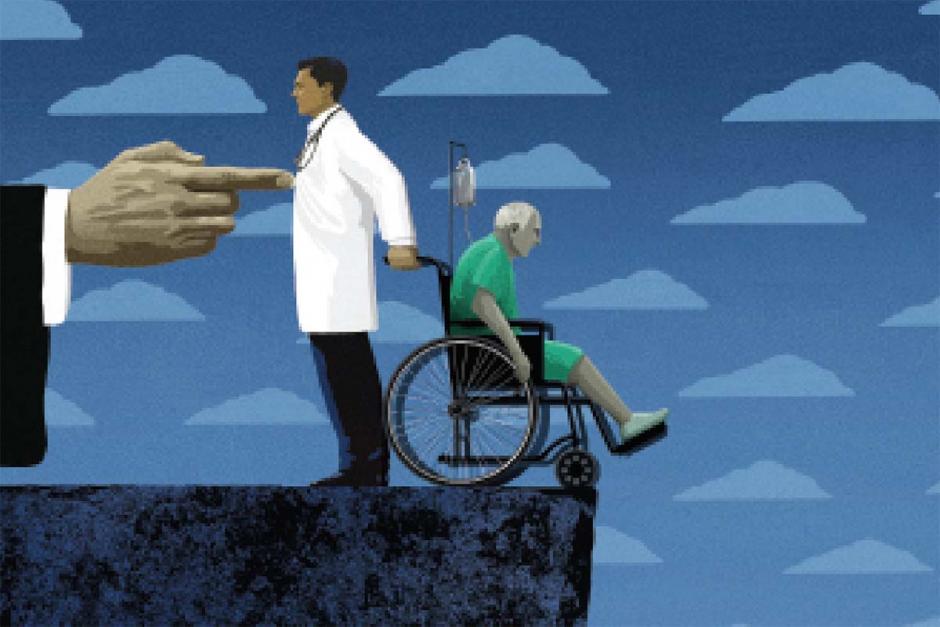 A Duty to Kill?

A California law gives a new spin to the Hippocratic Oath to “do no harm.”

The test results come back, and they’re not good. Your doctor explains that the cancer has advanced and that the chemo and radiation can do nothing, at this point, to help you. You probably have less than six months left to live, and only two options, really, from which to choose.

Option two is known as physician-assisted suicide, and if you’d like more information—a contact number, a recommendation or referral—just ask. Your doctor will be happy to provide that for you.

Only, what if your doctor isn’t? What if he or she believes in the sanctity of life, takes seriously their medical oath to do no harm, and perhaps even holds out hope for an as-yet-undiscovered treatment or untried medication or unexpected circumstance that could extend your life or even improve your condition? What if, in short, your doctor doesn’t want to offer you suicide as the means to your end?

If you live in California, that’s no longer your doctor’s decision to make.

California is one of 10 U.S. states, and the District of Columbia, that allow physicians by law to recommend and prescribe poison to commit assisted suicide if a patient is deemed to have a short time left to live. The California law also requires doctors to document a patient’s request for assisted suicide, provide them information about it, and, if necessary, refer the patient to another physician better equipped or more willing to help bring a life to its end.

In January, amendments to the law went into effect that speed up and simplify a process first legalized in 2016 by the California legislature. Under the original law, patients wanting to end their lives prematurely were required to verbally ask a physician to approve that request, wait at least 15 days before asking another physician to agree, and then submit a third request, in writing, signed, dated, and witnessed by two adults.

Under the 2022 revisions, however, eligible patients no longer need submit the written request, and the waiting period between oral requests has been reduced from 15 to two days.

Legislators who have pressed for doctor-assisted suicide—like state senator Susan Talamantes Eggman, who pushed through the original bill six years ago—have positioned themselves as agents of mercy, granting the gravely, hopelessly ill “the peace to be able to die on their own terms,” as Eggman says.1 In their view, speeding up the process just spares suffering patients that much more pain.

The new changes to the law purport to protect the dignity of terminal patients who may be depressed by the prospect of increased suffering, diminished independence, or becoming a serious burden to their loved ones. And, in that sense, the law seems aligned with the sentiments of a growing number of Americans.

During the past three decades, Gallup polling has indicated that not less than 64 percent—and as many as 75 percent—of Americans appear to support medical efforts that would “end the [terminal] patient’s life by some painless means.” The numbers run lower when people are asked about allowing doctors to help patients “commit suicide.”2

But opponents—including many medical professionals—contend that the law is as ethically slippery as a water park slide.

Dr. Leslee Cochrane is a full-time hospice physician in Murrieta, California. He told me he still recalls his first personal experience with death and dying, when his grandfather suffered a major stroke and lapsed into a coma during Cochrane’s sophomore year in college. “I remember vividly the anguish our family felt,” Cochrane said, “as we sat helplessly outside the intensive-care unit over the ensuing weeks, watching and waiting.” Eventually his grandfather died of complications related to the stroke.

“I know and understand what it feels like to have a loved one who is facing a terminal illness,” Cochrane said. “That experience was a significant factor in my decision to become a medical doctor and has given me tremendous empathy for those in similar situations.” His empathy and experience have led him to oppose this California law.

“I have been practicing medicine for more than 34 years—the past 18 as a full-time hospice physician,” he said. “In that role, I regularly make house calls and deal with complex pain and symptom management issues for terminally ill patients. I have provided end-of-life care for thousands of patients with a variety of conditions.

Cochrane—who is a member of the Christian Medical and Dental Associations, which is suing to challenge the law in federal court—says the 2016 version of the law was “written to ensure right-of-conscience protections for physicians like me, who do not wish to violate our consciences, morality, and professional ethics by participating in physician-assisted suicide.”

Under those protections, Cochrane says, participation in the law was strictly voluntary. Since the hospice where he works does not offer physician-assisted suicide, he never had to offer that option to the patients he provided with end-of-life care. Patients who wanted to access physician-assisted suicide could do so by contacting another provider, and neither Cochrane nor any of his colleagues had to violate their conscience or medical ethics.

The new version of the law changed all of that significantly. If asked, doctors are now required—whatever their personal concerns—to discuss, document, and forward a request for an assisted-suicide drug to a participating physician.

“They recognize, correctly,” Cochrane says, “that the new law mandates that a doctor take steps to help the patient commit suicide—even as it claims physicians will not be ‘participating’ in the process.”

Any physicians who decline to give their patients a referral when asked can be subject to civil or criminal penalties—and could potentially lose their license. That means such doctors as Cochrane are being forced by their government to choose between violating the law or ignoring their own deeply held personal convictions.

Those convictions can take several forms: medical, legal, and religious.

For one thing, the doctor-assisted-suicide law ignores the extraordinary advances in palliative care made available in recent years. Hospices and oncologists are now able to manage the pain of their patients in ways that allow them to live out their final days with dignity and minimal physical suffering.

Doing so not only underscores the value of every available moment of life itself, but offers an example of courage and strength to those who cherish and care for a person in their final days.

That, of course, assumes that the terminal prognosis is correct. Doctors continually marvel at the resilience, endurance, and even recuperation of those they’ve had to confront with a seemingly abbreviated time to live. Assisted suicide leaves no room for the mercies of God or the determination of individuals to surmount their predicted fate.

But it does allow for those who might profit from a suffering person’s early demise. By law, assisted suicide has no effect on the validity of the patient’s life insurance policy—an extraordinary loophole for those with an incentive to speed death along.

And, once a patient commits physician-assisted suicide, state law requires the cause of death be identified as their current, terminal condition, regardless of what else may ultimately contribute to their demise. This is, again, an unhealthy incentive and unwholesome opportunity for an interested party with wrong motivations.

The concerns, however, run considerably deeper than that.

The cultural embrace of assisted suicide also underscores the growing conviction of our society that the old, infirm, and vulnerable are an unnecessary burden on the rest of us—and so best disposed of as quickly and efficiently as possible. Life, a surging chorus of voices assures us, is only for those vital and viable enough to make a tangible contribution to society.

Since it’s increasingly the government that determines what makes a contribution “tangible,” this is a point of view that makes all of our lives more expendable.

The doctor-assisted-suicide law is a threat to the civil rights of medical professionals, compelling them to set aside their deepest personal beliefs simply because they’re physicians. And it’s a threat to the best interests of the patient, forcing doctors to compromise their greatest asset: a compassionate commitment to life. Heroic measures, after all, are hardly necessary for someone who’s already made up their mind to die.

The law is not even in the best interest of California itself, as Dr. Cochrane points out. In the wake of COVID-19, the state is facing a physician shortage, with the need for health-care workers greater than ever. Forcing physicians to choose between violating their conscience or leaving California to practice won’t enhance recruiting or improve medical care for the state’s citizens, whether terminal patients or not.

All of these factors are considerations in a new lawsuit filed by Alliance Defending Freedom against California’s doctor-assisted-suicide law—a law that contradicts Hippocrates’ primary admonition to do no harm.4 It’s a law that further paves the already-too-smooth path to legalized euthanasia. And it pushes the “right to die”—already rejected by the U.S. Supreme Court5—ever closer to a “duty to die.”

Perhaps some of the citizens and legislators of California have no problem venturing down that treacherous path. But the state’s physicians should not be compelled to do the same.

4 You can find out more details about this case on the ADF website, https://bit.ly/36YVDSs.

Kevin Theriot is senior counsel with Alliance Defending Freedom (ADF). He earned his J.D. from Vanderbilt University Law School and is admitted to the bar in the states of Tennessee, Texas, Florida, Virginia, Georgia, Missouri, Kansas, and Arizona. He is also a member of the U.S. Supreme Court and numerous federal district and appellate courts. You can find out more about ADF at www.ADF.org or on Twitter, ﻿@ADFLegal.