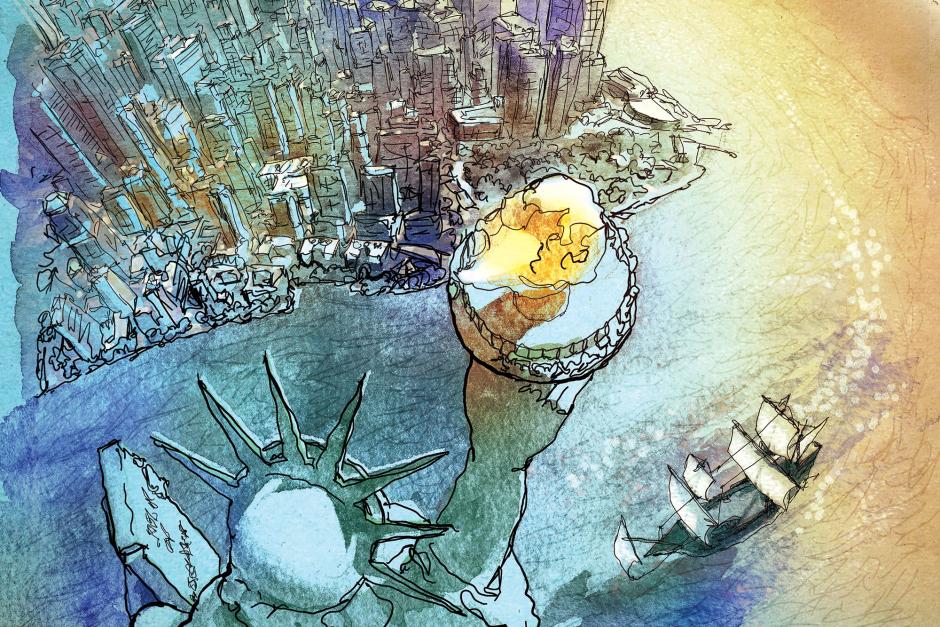 Freedom of religion is at the core of who we are as Americans. It's been at the center of our very identity since the Pilgrims fled religious persecution and landed in my home state of Massachusetts. And many settled in the city of Salem, which takes its name from the words “salam,” “shalom,” meaning peace.

But we’re reminded that before long, even there—even there in Salem, newly founded in order to get away from religious strife—unfortunately religious persecution arrived on the scene. Women were accused of witchcraft. . . . Emerging differences between religious leaders in Massachusetts and some congregations were led, as a result of that, to break away and to found new settlements. Rhode Island was founded by people who wandered through the woods leaving Massachusetts and wandered for an entire winter until they broke out on this expanse of water; and they named it Providence, for obvious reasons.

One hundred years after the Pilgrims set sail for religious freedom, a Catholic woman was executed on the Boston Common for the crime of praying her rosary. So we approach this issue—I certainly do—very mindful of our past and of how as Americans we have at times had to push and work and struggle to live up fully to the promise of our own founding.

John Winthrop was born in England, but his passionate faith and his disagreements with the Anglican Church inspired him to lead a ship full of religious dissidents to come to America to seek freedom of worship. And on the deck of the Arabella he famously said in a sermon that he delivered before they landed, “For we must consider that we shall be as a city upon a hill, the eyes of all people are upon us.” And they have been ever since then, and they are today.

And though we are obviously far from perfect and we know that, no place has ever welcomed so many different faiths to worship as freely as here in the United States of America. It’s something that we are extraordinarily proud of. But freedom of religion is not an American invention; it’s a universal value. And it’s enshrined in our Constitution, and it’s engrained in every human heart. The freedom to profess and practice one’s faith is the birthright of every human being, and that’s what we believe. These rights are properly recognized under international law. The promotion of international religious freedom is a priority for President [Barack] Obama, and it is a priority for me as secretary of state.

I am making certain, and I will continue to, that religious freedom remains an integral part of our global diplomatic engagement. The release of this report is an important part of those efforts. This report is a clear-eyed, objective look at the state of religious freedom around the world, and when necessary, yes, it does directly shine a light in a way that makes some countries—even some of our friends—uncomfortable. But it does so in order to try to make progress.

Today, of all days, we acknowledge a basic truth: Religious freedom is human freedom. And that’s why I’m especially proud to be joined today by President Obama’s newly minted nominee as our next ambassador-at-large for international religious freedom, Rabbi David Saperstein. When it comes to the work of protecting religious freedom, it is safe to say that David Saperstein represents the gold standard. Think about the progress of the past 20 years in elevating this fight, and David has been at the lead every step of the way—serving as the first chair of the U.S. International Religious Freedom Commission, director of the Religious Action Center for Reform Judaism, and as a member of the White House Council for Faith-based and Neighborhood Partnerships. . . .

One thing is for sure: Rabbi Saperstein is joining an important effort at a very important time. When countries undermine or attack religious freedom, they not only unjustly threaten the people that they target; they also threaten their country’s own stability. That’s why we, today, add Turkmenistan to the list of Countries of Particular Concern [CPC]. We have seen reports that people in Turkmenistan are detained, beaten, and tortured because of their religious beliefs. The government of Turkmenistan has passed religious laws that prohibit people from wearing religious attire in public places or that impose fines for distributing religious literature. And the authorities continue to arrest and imprison Jehovah’s Witnesses, who are conscientious objectors to military service.

I want to emphasize: This effort isn’t about naming countries to lists in order to make us feel somehow that we’ve spoken the truth. I want our CPC designations to be grounded in plans, action that helps to change the reality on the ground and actually help people. That’s why we are committed to working with governments as partners to help them ensure full respect for the human rights of all of their citizens.

And when 75 percent of the world’s population still lives in countries that don’t respect religious freedoms, let me tell you, we have a long journey ahead of us. We have a long way to go when governments kill, detain, or torture people based on a religious belief.

North Korea stands out again in this year’s report for its absolute and brutal repression of religious activity. Members of religious minorities are ripped from their families and isolated in political prison camps. They’re arrested and beaten, tortured, and killed. And we’ve seen reports that individuals have been arrested for doing nothing more than carrying a Bible.

And North Korea is not alone. Earlier this month Chinese officials sentenced Christian pastor Zhang Shaojie to 12 years in prison for peaceful advocacy on behalf of his church community. And just last week I welcomed the release of Meriam Ishag, a mother of two young children who had been imprisoned on charges of apostasy in Sudan. From South Asia to Sahel, governments have silenced members of religious groups with oppressive laws, harsh punishments, and brutal tactics that have no place in the twenty-first century.

In Iran, U.S.-Iranian citizen Pastor Saeed Abedini remains imprisoned. The Iranian authorities sentenced him to eight years behind bars simply because of his religious beliefs. We will continue to call for his release, and we will continue to work for it. And make no mistake: We will continue to stand up for religious minority communities under assault and in danger around the world, from Jehovah’s Witnesses to Baha’is to Ahmadi Muslims.

In Russia the government has used a succession of ever more punitive laws against what they call extremism to justify crude measures against people of faith. In China authorities harass Christians. They arrest Tibetan Buddhists simply for possessing the Dalai Lama’s photograph. And they prevent Uighur Muslims from providing religious education to their children or fasting during Ramadan. And in Uzbekistan the government continues to imprison its citizens, raid religious gatherings, and confiscate and destroy religious literature. These tactics continue to pose an incredible test. But make no mistake: These tactics will fail the test of history.

One of the troubling trends identified in this year’s report is how sectarian violence continues to displace families and devastate communities. Thousands of Rohingya Muslims have been displaced in Burma in the wake of sectarian violence, and tens of thousands more are living in squalid camps without adequate medical care.

In Pakistan, militants killed more than 500 Shia Muslims in sectarian bloodletting and brutally murdered 80 Christians in a single church bombing last year. The Pakistani government has yet to take adequate steps to bring those responsible to justice.

In Nigeria, Boko Haram has killed more than 1,000 people over the past year alone, and that includes Christian and Muslim religious leaders, individuals who were near—near—churches and mosques, worshippers, and bystanders alike. And we have all seen the savagery and incredible brutality of the Islamic State of Iraq and the Levant [ISIL]—the wholesale slaughter of Shia Muslims, the forced conversions of Christians in Mosul, the rape, executions, and use of women and children as human shields.

All of these acts of barbarism underscore the stakes. Just the other week, ISIL declared that any remaining Christians in Mosul must convert, pay a tax, or be executed on the spot. Around the world, repressive governments and extremist groups have been crystal clear about what they stand against. So we have to be equally clear about what we must stand for. We stand for greater freedom, greater tolerance, greater respect for rights of freedom of expression and freedom of conscience.

With this report I emphasize we are not arrogantly telling people what to believe. We’re not telling people how they have to live every day. We’re asking for the universal value of tolerance, of the ability of people to have a respect for their own individuality and their own choices. We are asserting a universal principle for tolerance. The Abrahamic faiths—Christianity, Judaism, and Islam—have to find new meaning in the old notion of our shared descent. What really is our common inheritance? What does it mean to be brothers and sisters and to express our beliefs in mutual tolerance and understanding? Answering those questions is our mission today. Edmund Burke once famously said, “All that is necessary for the triumph of evil is for good men to do nothing.” This report is the work of good men and women who are doing something profound in the face of bigotry and injustice.

And let me share with you: around the world some of today’s greatest advocates in this cause are doing their part every day, some of them at great risk and in great danger. They are doing it in order to force light into darkness. In Pakistan, following the militant attacks I just mentioned, members of the Muslim community formed human chains around churches to demonstrate solidarity against senseless sectarian violence. In Egypt, Muslim men stood in front of a Catholic church to protect the congregation from attacks. And in London, an Orthodox Jewish neighborhood watch team helped Muslim leaders protect their mosque and prevent future attacks.

There are many, many, many examples of people standing up for this universal value of tolerance and doing so for themselves at great risk. There are many whose names and communities and watch teams we will never know. But they will not receive prizes; they may not ever receive recognition. Their courage goes unremarked, but that makes it all the more remarkable, because they put their lives on the line in face of beatings and imprisonment and even death, in the near certainty that their sacrifice will be anonymous. Believe me, that’s the definition of courage.

So while serious challenges to religious freedom remain, I know that the power of the human spirit can and will triumph over them. It is not just up to the rabbis, the bishops, and the imams. It’s up to all of us to find the common ground and draw on what must be our common resolve to put our universal commitments into action.