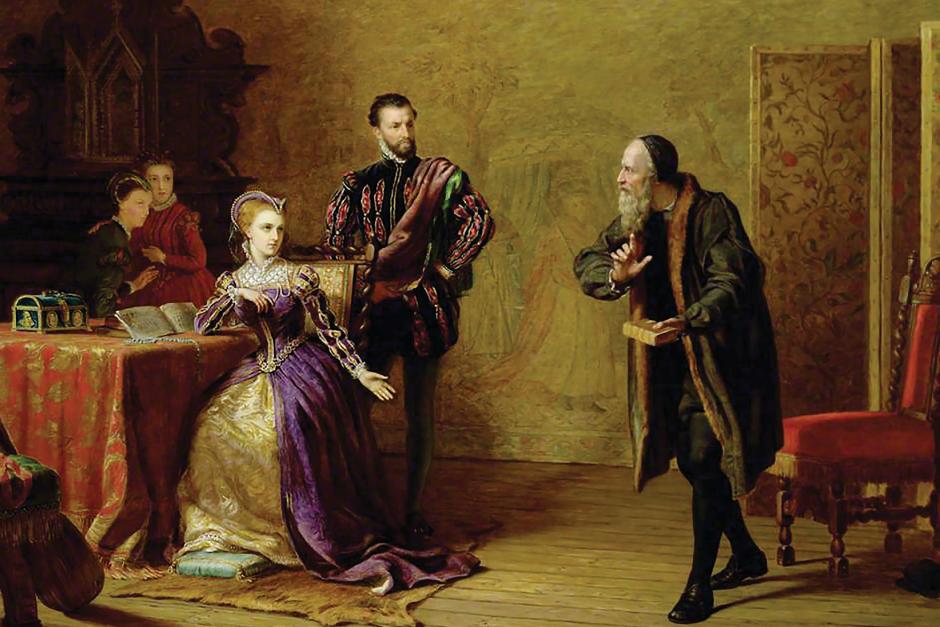 A Man for A’ That

A man of contradictions: That is how many today view John Knox, the outspoken and stalwart Reformer of Scotland. He is remembered both as a bold visionary for the future of reform in Scotland, as well as somewhat of a misogynist to twenty-first-century eyes. For while at times bold, he could also be harsh, even to women like Mary, Queen of Scots. Knox was not someone to compromise.

What is often overlooked is that his life was really far more complex. One historian has postulated that what Knox should be much more well known for are his sermons—during his lifetime he was considered to be one of the most powerful preachers of his era. Oddly, only a handful of copies of his sermons have survived. Similarly, for a man who was so vital to the Reformation in Scotland, his grave rests beneath pavement on a main street.1

A theme that appears to run throughout his life was the strong conviction that God called him for a special purpose. He believed that God revealed to him “secretes unknown to the world.” As a consequence, “he made my tong a trumpet, to forewarne realms and nations, yea, certaine great personages, of translations and changes, when no such things were feared, nor yet was appearing, a portion whereof cannot the world denie (be it never so blind) to be fulfilled.”2 Knox identified himself with Ezekiel’s description as God’s watchman called to sound His trumpet.3

Very little is known about the early life of Knox. Born about the year 1513 at Haddington, a small village south of Edinburgh, about 1529 he matriculated to the University of St. Andrews, where he studied theology. It was here that he first became acquainted with the ideas of reform, including the writings of Martin Luther. Ordained in 1536, he became a notary (the equivalent today of a country lawyer) who tutored the sons of local lairds (lower ranking Scottish nobility).

Knox was not the first preacher of the gospel and Reformation in Scotland. He was, however, associated with many of the early currents of reform. Although he came to faith rather late in life, about age 40 he quickly began to interface with other Reformers. It was also a rather tumultuous time; as Scotland was the scene of constant conflict—with both England and France. About the time of his birth, for example, some 10,000 warriors perished by the sword in the Battle of Flodden. It was, after all, a dangerous time in which to live.

After his ordination he served in Haddington. It was here that he seems to have for certain come into contact with George Wishart (c. 1513-1546). During his final sermon Knox famously stood below the pulpit in St. Andrews. When Wishart was subsequently arrested and tried for heresy, this ultimately led to his martyrdom in March 1546, 18 years after an earlier Reformer, Patrick Hamilton, had been executed for teaching ideas based upon the writings of Martin Luther and Ulrich Zwingli. The Catholic hierarchy had managed to quash dissent through through fear and persecution.

When Hamilton had perished, there was very little reaction. but things were different at Wishart’s martyrdom, and it galvanized his supporters. In turn they murdered Cardinal David Beaton, archbishop of St. Andrews, and the instigator of Wishart’s execution.4 Whereas Scotland had just begun to awaken to the Reformation under Patrick Hamilton, with Wishart’s death events moved rapidly.

His followers murdered Beaton and took his castle. Then, while under siege, David Lindsay, one of the leaders of the rebellion, persuaded Knox to become the castle chaplain. Once called, Knox never doubted his divine call to preach.5

When the French Mary of Guise retook the castle in 1547, Knox was captured, along with many others, and for a time was a galley slave. Although on his release, Knox was exiled for a time to England, he was a “restless activist” who spent the rest of his life trying to effect reform in his native Scotland.6

Then England briefly returned to the Roman Catholic faith when one of Henry VIII’s daughters, Mary I, began a relentless persecution that “earned her the title Bloody Mary.”7 Knox fled to Germany for a time. He ministered to a group of refugees and eventually matriculated to Geneva, Switzerland, where he became acquainted with the work of John Calvin. He stayed for the next five years (from 1554 to 1559).

It was while he was a refugee in mainland Europe that “he developed the theory that Protestants had the right to resist” oppressive governments. Knox struggled with a series of four political questions: whether a minor can rule by divine right; whether a female can rule and transfer sovereignty to her husband; whether people should obey idolatrous rulers; and what kind of person ought one to be if one follows an ungodly ruler. These questions haunted Knox as he interacted with Calvin and other Reformers.

Knox thrived in Geneva. He loved to listen to Calvin’s sermons, and cultivated a close friendship with the Reformer.8 In fact, he was so impressed with the work of reform in Geneva that he called it “the most perfect school of Christ.”9

While Knox was exiled, the continued meddling of the French into Scottish affairs proved too much for some of the Scottish nobles. Four of them signed a bond in 1557 pledging themselves to the cause of reform and to establish the “MAIST BLISSED WORDE OF GOD.”10 They wrote to Knox, asking him to return home. Knox, who felt deeply for the people of his own land, felt that this was God calling him to return.11 He was delayed for a time because the initial movement was not a popular success, but it did, however, become the basis for further changes in Scotland. When civil war broke out, the anti-French faction won. In 1650 a treaty was put into place that led to the so-called Reformation Parliament. Knox and five other ministers completed a confession of faith, known as the Scots Confession, in four days. The Scottish Parliament ratified the Scots Confession and set in stone the road forward for the Scottish Reformation.

During this transition period Knox’s arrival in Scotland helped solidify the work of reform. The people were galvanized under his leadership and supported him. Although he had until then been a refugee and exile, he lived under constant threat to his own life. Now things had changed. The political elite as well as the common people were receptive to reform. As Knox communicated the Bible from the pulpit of St. Giles’ Cathedral in Edinburgh, he relentlessly attacked oppressive ideas such as the Mass. For him, such corruptions symbolized both the abuse of the church, and the general ignorance and neglect of Scripture.

During the last 10 years of his life he oversaw a remarkable spread of the gospel across Scotland. This was in spite of Mary, Queen of Scots, who returned to Scotland seeking in every way that she could to oppose Knox. During a fateful encounter at Holyrood Palace, Mary, Queen of Scots, and Knox the Reformer discussed the issues of the day. At one point she asked: “Ye interpret the Scriptures in one manner, and they in another. Whom shall I believe? Who shall be judge?” Knox replied: “Ye shall believe God, that plainly speaketh in His Word. . . . The Word of God is plain in itself. If there appear any obscurity in one place, the Holy Ghost, which is never contrarious to Himself, explaineth the same more clearly in other places; so that there can remain no doubt, but unto such as obstinately will remain ignorant.”12 Knox stood up to her using as the basis for his authority the Bible. She was afterward driven from the throne.

So what was Knox’s legacy?

It doesn’t appear to be his theology per se. Although he was a famous and galvanizing preacher, he is not really remembered for his theological contributions.13 According to one historian, Knox did not develop any “fresh interpretations” of the Bible. In fact, he is not really thought of as a “first-rate thinker of the Protestant Reformation.”14 Although he did occasionally develop an original theological position, his ideas were really not that unique.15

Instead, it seems that Knox’s real contribution was more in his ability to share his ideas with others, particularly over a long period of time, which led to a general and increasing support for reform ideas. One of his greatest contributions, often highlighted by historians, was his participation as noted earlier in developing the Scots Confession (approved by Parliament in 1560). The 1561 edition features the words of Matthew 24:14, which emphasizes the missionary calling of the church. It also helps to illustrate his consistent pastoral approach to leadership. No single Reformer dominated his genius. Yet he took and consolidated the best ideas of reform in a practical way to his parishioners and, by extension, to his people.

This can be further seen when Parliament requested him to draw up a Confession of Faith and Doctrine (published in 1560 and replaced in 1647 by the Westminster Confession). This document emphasized evangelical doctrine and urged the necessity of discipline in the Christian life. When a General Assembly was called in 1560, this led to the final establishment of the Reformation in Scotland. The subsequent Book of Discipline (1561) led to a new liturgy and the Book of Common Order (1564). It was in this way that Knox consolidated the Reformation and communicated these new ideas across Scotland.

During his lifetime Knox never knew for sure whether Protestantism had in fact become firmly rooted in Scotland. He had good reason to be afraid. His hope for the future at times looked rather bleak. He prayed for divine deliverance throughout his life. Yet his was also a life of passion and personified the fighting spirit. He was born, bred, and always remained a Scot. He viewed the great struggle of his life as nothing less than the great battle against antichrist.16

Perhaps Knox’s greatest contribution was that when the Scottish government was reformulated, he was determined to set up a new kind of government in which matters between church and state would remain separate. This was an entirely new model of government. No wonder one nineteenth-century historian dubbed him “the brave Scotch Reformer.”17 Even one Scottish regent, who at times opposed Knox, stated while looking over his grave that “here lies one who neither flattered nor feared any flesh.”18

12 For a transcript of their encounter, see http://www.reformation.org/john-knox-interview.html, accessed January 8, 2018.