A Message of Encouragement 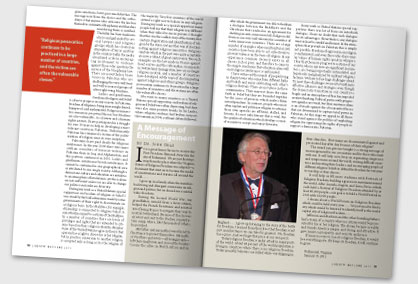 It is a great honor for me to receive the First Freedom National Award in the city of Richmond. We are just footsteps away from the place where the Virginia Statute of Religious Freedom was adopted—a document that went on to become the model of constitutions and statutes all around the world. . . .

I grew up in a family where the members had strong and divergent convictions on religion and politics; but we shared one essential value: freedom. 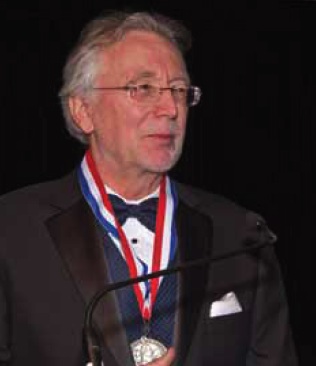 During the Second World War, my grandfather, Arnold Graz, a Swiss citizen, helped the French Resistance and assisted Jews fleeing France to navigate their way to neutral Switzerland. Because of this, he was arrested and sent to the Dachau concentration camp, where, like thousands of others, he perished.

My father and my mother were forced to flee France to protect themselves. My mother's brothers and sisters—all young people—left their small town and crossed the borders to join the allies in North Africa and in England. . . . I grew up listening to the story of the battle for freedom. I learned from their lives that freedom is not just an inheritance we can take for granted. No, freedom has a price. And we forget that price at our own peril.

Today religious freedom is under attack in many parts of the world. About 65 percent of the world population is living in countries where there is no religious freedom. Today peaceful believers are killed while worshipping in their churches. How many are discriminated against and persecuted day after day because of their religion?

The award you give me tonight is a strong message of encouragement for our association and for those who work with me. It will help us to keep on organizing congresses and symposiums around the world, visiting difficult countries and meeting their leaders, and encouraging people of different religious beliefs to defend the freedom for everyone to worship as they choose.

I dream about a World Forum on Religious Freedom which could be held every year. . . . We just need to find a city which would be honored to identify itself as the world capital city of religious freedom. . . .

Jefferson and Madison and the other founding fathers had a vision of a country where no citizen would be persecuted for his or her religion. The dream became a reality, and it made America unique, and strong, and attractive. It gave America prosperity, and security, and peace.