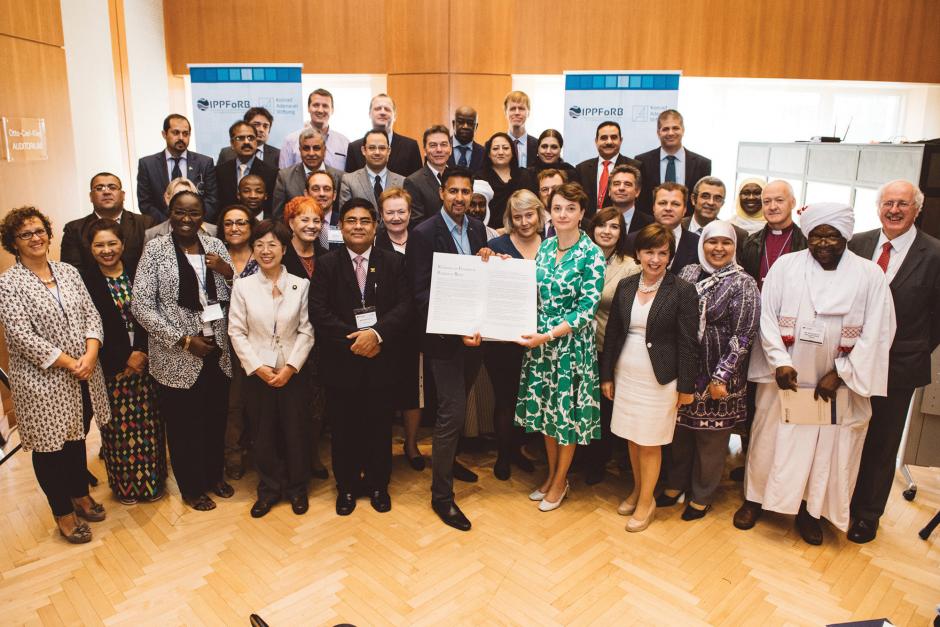 The recent case of the Kentucky county clerk who refused to issue marriage licenses to same-sex couples has provided us with a well-polished mirror in which to take a long, sobering look at the state of the religious freedom discourse in the United States. Clearly the picture isn’t encouraging.

Where do we go from here? For religious freedom advocates in the United States, it’s a disheartening question with seemingly no “win-win” scenario in sight.

Nowhere has this deep-seated dysfunction been more apparent in recent years than in the various United Nations resolutions aimed at “protecting religion from defamation” or guarding against religious profiling or stereotyping. Laudable-sounding goals, yet in reality they represent just the tip of an iceberg. Lurking below the waterline is all that is antithetical to free speech and freedom to worship.

In November 2014, with little fanfare, a new religious freedom organization was launched in Oslo, Norway. Its somewhat unwieldy name—the International Panel of Parliamentarians for Freedom of Religion or Belief, otherwise known by its acronym IPPFoRB—belies a very simple premise.

Its goal is to create an informal global network of lawmakers who are committed to promoting religious freedom, as defined by Article 18 of the Universal Declaration of Human Rights.1 Clearly this is an organization that at first glance has little real clout, since it has no direct law-changing power.

Yet this group is deliberately tapping into a resource that, in the world of religious liberty advocacy, has remained largely underutilized. These legislators are men and women who, in their own country, hold some measure of political influence. They are well-known public figures. They have access to others who hold political power. They are in a position to influence public discourse. They can reach out to other like-minded individuals and build local networks. They can take the principles of religious freedom and explain them within their local culture and context. And most important, each one believes that promoting religious freedom is the only viable way forward in combating religious extremism and building a more tolerant, more peaceful future.

My association with IPPFoRB began earlier this year when I was invited to serve on the organization’s secretariat, which helps manage IPPFoRB activities and events. Just a few months earlier 30 lawmakers from around the world met at the Nobel Peace Center in Oslo, Norway, and signed the IPPFoRB’s originating charter, committing themselves to working to advance freedom of belief for all. When I joined the IPPFoRB secretariat, our focus was on planning the next meeting of the organization in New York City in September, just a few days before the beginning of the seventieth session of the U.N. General Assembly. Initially we weren’t sure how many participants would actually attend, but it quickly became clear that interest was far higher than we’d anticipated, and we’d have far more applicants than available spaces.

When the IPPFoRB’s second-ever gathering began on the evening of September 19, 2015, at the One U.N. New York Hotel, just across from the United Nations building in New York City, there were more than 100 parliamentarians present, representing more than 50 countries. They came from Germany, United Kingdom, Norway, Brazil, South Africa, Iraq, Malaysia, Egypt, Senegal, Turkey, Tunisia, Pakistan, and many more.

When our meetings ended a few days later, I left New York with a deeper appreciation for both the tremendous potential of the IPPFoRB and the daunting challenges it faces. As I listened to the various speakers, took part in breakout sessions, and—most important—talked with legislators from many different countries and cultures, I became even more convinced that:

Profound political, religious, and cultural differences need not bar cooperation toward a mutual goal. One adjective that was used often during the meetings, and in the news reports that followed, was “unprecedented.” And, indeed, this gathering of 100-plus legislators was unique. On no other occasion have so many lawmakers from so many different countries and vastly different political and religious persuasions met with the declared intention of working together. The current United States Congress may be hamstrung by political antagonisms, but I’d venture to guess that this is nothing in comparison to the profound differences that marked those who sat together in the IPPFoRB meetings. During breaks I spoke with delegates from liberal European democracies and those from countries whose legal codes were shaped by Islamic law. On many—perhaps most—geopolitical and social issues these individuals were probably poles apart. But the only prerequisite for participation with the IPPFoRB is that each person embraces the notion of religious freedom as defined by Article 18. And this, it was clear, provided enough common ground to begin building a strong and effective coalition for change.

Face-to-face interaction with religious liberty advocates from other cultures is a must for moving closer toward genuine transnational understanding. It’s easy for a Western-educated lawyer like me to fall into the trap of making cultural assumptions. I look at blasphemy laws, for instance, and ask, “How can these laws be allowed to stand? What must we do to bring pressure to bear on countries that enforce these laws, which can have such tragic consequences for members of religious minorities?” I received a cultural reality check in New York during a chat with delegates from a country where blasphemy laws are an entrenched feature of its legal landscape. “Why are you in the West so anxious to attack these laws?” they asked me. “Don’t you know that these laws are here to stay? Why don’t you use your energy and influence more profitably by pushing for stronger evidentiary requirements in prosecuting blasphemy cases, so we can at least reduce the abuse of these laws?” At the IPPFoRB meeting this cultural exchange was working both ways. Just as I was receiving a lesson in cultural realities, so too were other delegates learning from each other. The net result? I believe we each left New York with some of our cultural assumptions challenged, and our worldview expanded.

The IPPFoRB model provides a promising approach for the future of transnational cooperation on religious freedom. In their home countries the delegates to New York were highly influential individuals—members of elite political institutions. Yet in many ways, the IPPFoRB approach is far more akin to grassroots activism than any top-down, institutional model for political change. These men and women were present in New York by choice—driven by a passionate conviction that religious freedom is an ideal that must be pursued. On one level it could be easy to dismiss the gathering in New York as somewhat symbolic. What, really, can this organization—these individuals—do to move the needle internationally on religious freedom? The answer in the short term, clearly, is “not much.” Yet these legislators have gone back home, armed with information, inspiration, and support. Many of them, as voices for religious freedom in their own country, have long felt alone in their struggle. Within IPPFoRB they’ve found allies. In the weeks since the New York meeting, the IPPFoRB secretariat has received feedback from attendees who’ve since made speeches in their parliaments, reached out to other like-minded legislators to form working groups, or who are making plans to introduce resolutions or legislation. Last year at the first meeting of IPPFoRB, we had 30 lawmakers. This year we had 100. Next year we’re planning for a significantly larger group. And as critical mass grows, the needle will begin to move.

The meeting in New York concluded with action. The majority of delegates signed letters to government leaders in Myanmar, Vietnam, and Iran, calling attention to religious freedom violations in these countries.2 This, in itself, is one tangible outcome of the event. Many delegates plan to take these letters back to their home legislatures, and work to have this wording used as a template for similar letters to be sent on behalf of their own national government.

Among the many leaders of the religious freedom advocacy community who attended the New York event was David Saperstein, U.S. State Department ambassador-at-large for International Religious Freedom. In his address he urged delegates to become even more active, to attend trials of religious minorities, to hold hearings, and to issue statements about religious freedom. Robert George, chair of the U.S. Commission on International Religious Freedom, also spoke, along with Nassir-Abdulaziz Al-Nasser, of the United Nations Alliance of Civilizations, and Ivan Šimonović, the United Nations assistant secretary-general for human rights.

But the most powerful speaker of the weekend had never held political or public office. It was a young, unassuming Iranian-American woman named Naghmeh Abedini, who brought into focus most clearly the forces that had drawn together this unlikely alliance of lawmakers.

Naghmeh’s husband, Christian pastor Saeed Abedini, was arrested and imprisoned in Iran three years ago for conducting private Bible studies. Since his arrest, he has been repeatedly beaten and tortured as authorities attempt to extract from him a public renunciation of his faith. The facility in which Pastor Saeed is being held is notorious as one of the harshest prisons in Iran. All he has to do to gain his freedom is to deny his faith. But he won’t.

I looked around the room as Naghmeh spoke. Jews, Muslims, Christians, Buddhists, Hindus, Zoroastrians, and those of many other different religions sat riveted by her account of courage in the face of brutal persecution. Each of us there, regardless of our own religious beliefs, understood and honored her story about the transcendence of human faith, even in spite of almost unimaginable personal suffering.

This deep level of conviction is the animating force behind the IPPFoRB, and the reason, I believe, it has such potential to expand and strengthen the transnational discourse about religious freedom. Will it change the world? Not tomorrow, or even next year. But the more we’re able to shine a light on egregious abuses of freedom, the more we can bring together voices from different parts of the globe and support each other, the more we will be able to strengthen and grow a meaningful global alliance for change.

1 Article 18 says, “Everyone has the right to freedom of thought, conscience and religion; this right includes freedom to change his religion or belief, and freedom, either alone or in community with others and in public or private, to manifest his religion or belief in teaching, practice, worship and observance.” (Universal Declaration of Human Rights (UDHR), adopted by the United Nations General Assembly on December 10, 1948).

2 The full text of these letters, along with details about the “New York Charter” signed by a majority of the delegates, can be found at www.ippforb.com.