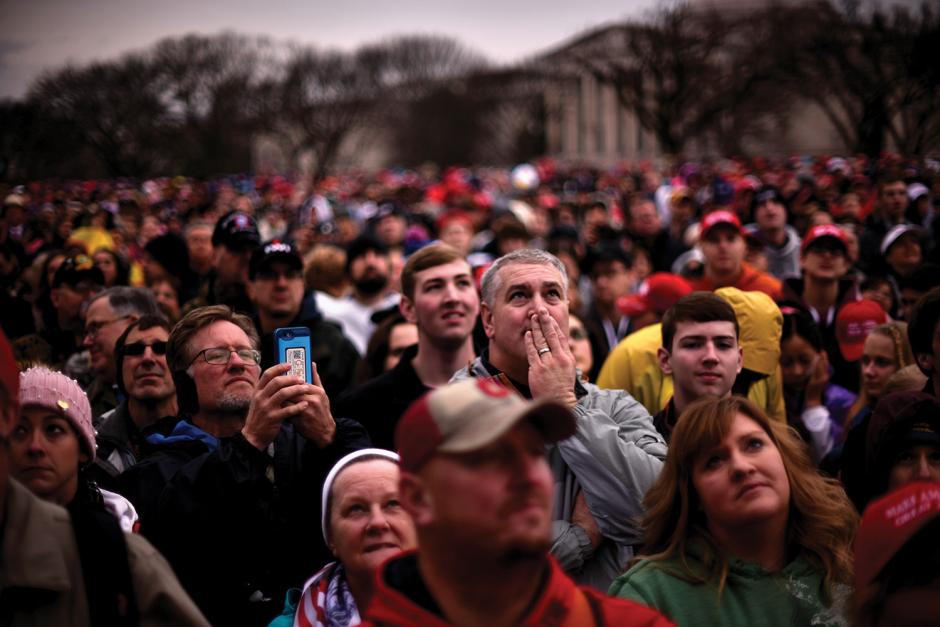 The stakes were high for Evangelicals in 2016. The outcome of the presidential election would determine the direction of the Supreme Court, and along with it the fate of abortion, religious liberty, and other issues that are important to the Evangelical community. They responded to the challenge with a historically high turnout on Election Day. White Evangelicals by themselves make up more than a quarter of the entire electorate, and 81 percent of them voted for Donald Trump.1 The only demographic groups that delivered a higher percentage of votes for Trump were Republican men (90 percent) and Republican women (89 percent). Evangelical turnout in support of Trump was especially strong in North Carolina and Florida. Trump narrowly won both states, and would not have gotten to 270 electoral votes without them. As one of Trump’s most reliable and robust voter bases, Evangelicals naturally expect the Trump administration to champion their vision and goals for the future.

Joseph Sullivan is a Caucasian grandfather in his 60s who resides in Yucca Valley, California. He was recently reelected president of the board of directors of the Morongo Basin Healthcare District. Sullivan was raised in a working-class Irish Catholic family in Anaconda, Montana. While his father was a staunch Democrat who worked in the copper mines near Butte, it was a career in law enforcement that impelled Sullivan to become a registered Republican. As a beat cop, Sullivan witnessed what he considered to be a gradual degradation of morals in society and a diminishing respect for authority. He blamed much of this on liberalism, and saw the GOP as the party that stood for law and order as well as the preservation of traditional values.

Sullivan identifies himself as an Evangelical Christian. According to Sullivan, “you have to show your faith in the community through your actions and your words so that people know what you stand for. They know you are spreading God’s Word through your actions.” Sullivan’s actions match his words. He adamantly strives for his faith to be the moral compass that directs the policy decisions he makes as an elected official.

Like many Evangelicals, Sullivan was initially a supporter of Ted Cruz’s campaign for the White House. He regarded Cruz to be “the perfect balance between Christian conservatism and Republican values.” Sullivan was initially cynical of Trump, as he considered the former reality show host to be a “showman and huckster who was in it only for the publicity.” However, as the primary season progressed and Trump racked up a commanding lead in the delegate count, Sullivan came to accept the likelihood that Trump would become the Republican nominee for president. Sullivan decided that despite his shortcomings, Trump was the better alternative. Sullivan started warming up to Trump when he noticed that the Republican nominee was “surrounding himself with the right people” including Mike Pence, a favorite of Evangelicals. Sullivan finally hopped aboard the trump train after listening to the candidate’s speech to a group of Evangelical pastors on August 11, 2016 in Orlando. It was during this event hosted by the American Renewal Project that Trump humbly asked the pastors to pray for him. He even self-deprecatingly joked that winning the White House is “probably the only way I’ll get into heaven.”2 That speech convinced Sullivan that God was working through Trump, who was now demonstrating how “a worldly man can evolve into being a moral candidate.”

Donald Trump has renewed Joseph Sullivan’s hopes for America’s future. Sullivan’s vision for the next four years is that America returns to being a nation that is governed by biblical principles. He believes the Founders intended for the United States of America to be a country that lives in accordance with Scripture. Sullivan feels it was his generation (baby boomers) that initiated America’s gradual pivot away from the Christian ideals and values that made it exceptional. He also believes America’s descent into the moral abyss accelerated during the Obama presidency. Sullivan now believes America is embarking on a reawakening that will lead it back to greatness by once again relying on God for direction.

Abortion is one issue in which Joseph Sullivan has specific expectations for Trump’s presidency. He hopes Trump will deliver on his promise to defund Planned Parenthood if it does not stop killing unborn children. Like most Evangelicals, Sullivan believes abortion is against the teachings of Scripture. He does not believe taxpayer money should be used to pay for abortions. The public funding of abortions is essentially forcing Christian taxpayers to finance an activity that is in violation of their faith. Sullivan sees this as an abrogation of religious liberty.

The Supreme Court’s Roe v. Wade decision was instrumental in arousing Evangelicals to mobilize into a political force in the 1970s. Abortion is an issue on which there is an overwhelming consensus among Evangelicals. According to Pew Research, 75 percent of White Evangelicals believe that having an abortion is morally wrong.3 There was a clear distinction between Donald Trump and Hillary Clinton on the abortion issue, as evidenced by their statements during the debate that took place in Las Vegas on October 19, 2016. It was during this third and final debate that moderator Chris Wallace asked a direct question about abortion. Hillary Clinton answered that she “will defend Roe v. Wade” because “we have come too far to have that turn back now.” In contrast, Donald Trump said he will appoint anti-abortion judges who will overturn Roe, and “the states will then make a determination.”

Trump’s battle plan for the abortion issue is nothing new; both President George H. W. Bush and George W. Bush expressed a desire to have Roe v. Wade overturned. However, only Trump will govern amid a set of circumstances that will enable him to create a five-justice majority on the Supreme Court that can actually overturn Roe v. Wade. George H. W. Bush held office during a time the Democrats controlled the Senate. This inhibited his ability to use the abortion issue as a litmus test in making judicial appointments, and so he resorted to rolling the dice and selecting David Souter, whose lack of a track record on the abortion issue made him palatable to Senate Democrats. Trump will not face this dilemma for at least the next two years, because the Republicans now have a majority in the Senate. Therefore, Trump need not compromise on his Supreme Court nomination in order to appease Democrats.

George W. Bush served alongside a Republican-controlled Senate, and he had the opportunity to appoint two justices. However, one of his appointments replaced a justice that was already pro-life (Rehnquist), so there was no possibility to change the Court’s balance on Roe v. Wade. In contrast, there is a strong likelihood that President Trump will indeed have the elusive opportunity to alter the ideological makeup of the Supreme Court. There are presently three justices that are critical of Roe v. Wade (Roberts, Thomas, and Alito). Trump will select a successor to Justice Scalia, and that individual could join the aforementioned trio. After that, Trump will likely have a chance to select more justices, as Ginsburg and Kennedy are both over the age of 80. If Trump replaces either of them with a justice who is pro-life, then there will be the five-justice majority necessary to overturn Roe v. Wade.

Delivering on the Hopes and Expectations

Donald Trump may not be an Evangelical. A twice-divorced billionaire who is best known for ostentatious real estate properties is not an ideal exemplification of the life and teachings of Jesus Christ. However, Trump delivered a campaign message that resonated with Evangelicals, and they responded with a level of support that even surpassed that of George W. Bush, who was perceived as a true Evangelical. Now that Trump is president, many Evangelicals have high hopes for the realization of their vision for America under a Trump presidency. It is up to the forty-fifth president of the United States to assure this loyal voter base that they made the right choice by voting for him, and he can do that by giving a voice to Evangelicals in his administration and recognizing their goals and vision for the future of this nation.

This is a forthright analysis of what Evangelicals expect of the new U.S. administration. Their support was pivotal in the recent election. And their moral sense does derive from the very bedrock of a Christian sensibility that has long characterized the United States. However, this magazine has long cautioned that the Evangelical agenda, at least since the 1970s, has, in seeking a political solution to moral problems, risked the very safety afforded by a separation of church and state. We will see how this recent wholehearted support for a hoped religious agenda from a very secular campaign will benefit them: and, probably more important, will it support the religious liberty of all faiths? Narrow religious entitlement and a conflation of state and a religious viewpoint have a poor track record for freedom. We pray for the best. -Lincoln E. Steed, Editor