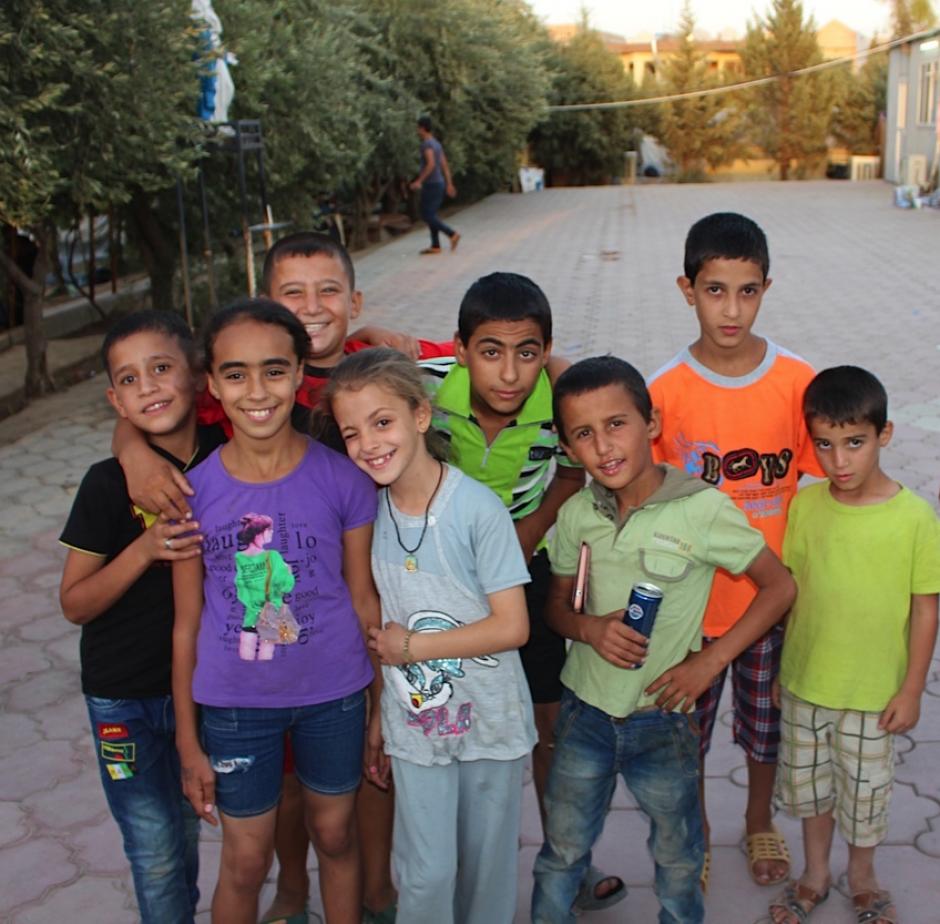 As the Islamic State (ISIS) wages genocide against Yezidis, Christians, and others in Iraq, a group of Iraqis are planting the seeds that will bring freedom and hope to these broken communities.

By March 2016 both the United States and European Parliament had declared the situation in Iraq genocide, but these designations brought little action; for many of those affected, the situation on the ground remained the same. Many people in the communities targeted by the militants wondered if they had any future in their homeland.

Ghanam Elyas is a high school teacher in northern Iraq whose Yezidi family was displaced when Islamic State militants ravaged his village and home. His brother, Jalal, runs an organization offering education and support to Yezidi youth displaced by the violence. Together they are teaching many of the displaced children who live in camps scattered throughout northern Iraq how to find hope.

In mid-2014 nearly a half million people fled Mosul, 200,000 fled the Nineveh plains, and another 200,000 fled Sinjar. Of those displaced, not only were most of them Christians, Yezidis, Shabak, Kaka’i, and Turkmen, but those displaced also made up about half of the total population of their religious communities living in Iraq. Many of the holy sites and places of historical value to these religious communities were destroyed.

When ISIS seized control of northern Iraq, they sought to destroy anyone that opposed their way of life or beliefs—Shi’a were brutally murdered on the spot, Christians were told to “convert or die,” Yezidis were killed or used as sex slaves. No one was safe. Thousands of those who fled were killed by Islamic State militants, including many of the Yezidi men, elderly, and older women. At least 5,000 girls were trafficked as sex slaves, with nearly 3,000 still being held. The villages in Sinjar are filled with land mines and mass graves.

The attacks by ISIS left these communities destitute, dependent on humanitarian and government aid, and on the verge of eradication. Few of those who fled want to return to villages where their former neighbors still live—the same people who welcomed ISIS and at times even turned them over to the militants.

These displaced children have been threatened simply because of their religious identity, and the scars run deep. Teaching children how to find hope in the midst of such darkness is not an easy task, but it is essential.

As Ghanam quietly walked his students to a nearby garden, he knew he had to help them believe that circumstances would get better. He pointed to the flowers and asked the students, “Which is the most beautiful?” One by one the students pointed out the flowers they liked the most.

Then Ghanam asked the students to go pick any flower they liked except the yellow ones. Soon the garden had disappeared except for a few lone yellow flowers. The students were dismayed.

“This is what has happened in our country to my people and to many others,” Ghanam told them. He explained how Iraq was the cradle of civilization—a land in which many communities had existed for thousands of years together. It was not always a peaceful coexistence, but they found ways to live together. Now they find themselves in a country that has been trampled by militants who destroyed everyone who was not like them.

Ghanam’s students wondered whether it would be possible for the Yezidis, Christians, and others who had suffered to forgive and rebuild their lives. Ghanam and Jalal handed each student a packet of seeds and then Ghanam said, “The future is in your hands.”
In the following weeks each student discovered the unique history of the many different religious communities in Iraq, from the Assyrians to the Yezidis. They learned how the Jews had been deported to Iraq during the Assyrian and Babylonian empires and how the king of Erbil, which is now the Kurdish capital, had once converted to Judaism and helped rebuild the temple in Jerusalem. They became familiar with Zoroastrianism, the former national religion, and how, at one time, the Christian church in Iraq was more prominent than the Holy Roman Empire. They read about the split within Islam in the center of their country, and of the divisions and rivalries that it created. And they learned how each community had thrived and suffered in its turn.

At the same time, the students were given a section of the garden where they tended to their seeds to help them grow. And they waited for Ghanam to help them understand how they could find hope in the future.

At the same time the students were planting their garden, Mariwan Naqshbandi, director of relations in the Kurdistan regional government’s Ministry of Religious Affairs, was searching for a way to preserve the history and identity of Iraq’s diverse religious communities. He did not yet realize that he held a key to the students’ search for hope.

In early 2015 Naqshbandi had moved Law Number 5 of Protecting Components of Iraqi Kurdistan through the Kurdish Parliament. The new law required that all minorities be represented in the government and receive government support to build their places of worship.

For Naqshbandi it was his way of planting a seed for the freedom of these communities. Soon he appointed ministry representatives for eight religious communities—Muslim, Christian, Baha’i, Zoroastrian, Yezidi, Kaka’i, Sabean Mandaean, and Jewish.

This was the first time most of these communities had been officially recognized in Iraq—albeit only in Iraqi Kurdistan at the moment. In fact, most still hold identity cards that list them as either Muslim or Christian, as those were the only options available when they are registered at birth. But since identity cards are issued by Baghdad, the Kurdish government cannot change them—another small hurdle that Naqshbandi wants to correct eventually.

This was also the first time that most Iraqis in Kurdistan had ever heard that there were Jews remaining in their region.

Shortly after law Number 5 passed, Sherzad Mamsani knocked on Naqshbani’s door. It was a day that changed everything for the Jewish people of Iraqi Kurdistan.

When Saddam Hussein took power in the 1970s, he forced Iraq’s dwindling Jewish population and other minority faiths to be identified as Muslims on their identity cards. After decades of persecution, many emigrated for good. But Mamsani’s family and hundreds of others remained, quietly holding on to their faith.

Mamsani’s Jewish mother did not hide her faith, and he grew up with a strong desire for a time that he and other Kurdish Jews could live out their faith openly.

But most lived in secrecy. They hid their religious objects under their homes and furtively married their children to other Jewish families. While the older generations held on to their prayers and memories, most did not pass them on to their children. With the fall of Saddam, families began to share their history with their children and rediscover their Jewish heritage.

On November 19, 2015, the ministry held a meeting with UNESCO in which leaders from the eight minority groups represented in Kurdistan came together to speak at a historic conference. Mamsani would speak as a representative of the Jewish community of Kurdistan.

As he approached the podium, the audience broke out into applause. No one was more surprised than Mamsani: “I am so happy. For 70 years our history was dead, and now it is alive.”

The resurgence of Jewish faith and history in Iraqi Kurdistan is one result of the seeds Naqshbani planted by opening the door to all of the region’s religious communities. Naqshbandi has explained that these momentous steps in a country filled with sectarian divisions and religious strife will not come without challenges: “We believe we can now serve the humanity, but our road is not filled with a flower.”

Soon even he would see the power of the seeds he was planting for freedom.

Naqshbandi’s next challenge was to help each community write their history so it could be preserved and taught in the schools, educating a new generation in the diverse history of the region. And upon learning about Ghanam and Jalal’s work with youth, he realized it would fit perfectly into this plan.

The students gathered at the garden they had been tending, which was now filled with many beautiful colors and different types of flowers. It was a stark contrast to the barren, desert displacement camps where they live.

Ghanam asked the students if they preferred the garden before or with the yellow flowers better than the one they had tended. They agreed that this one was more beautiful and each felt proud of the work they had done to create it.

Now they understood how their work in the garden illustrated the future for their communities and Iraq as a whole.

One young Yezidi shared how he got to know a Muslim boy in the class as he was learning about the history of his faith. He didn’t want to talk to the Muslim before the lesson because he associated him with the terrorists that forced his family out of their home. But as they talked, he learned that the Muslim student, a Shi’a, had also been attacked by the militants. The Yezidi boy realized that he too had suffered and that it was important not to judge before he met him.

Both boys understood that relationships are similar to tending a garden: they take time and care, but they are worth the effort.

Several students said that they had never met someone from a minority religion before and how this activity helped them understand one another better. They were not afraid of others anymore. Their differences are part of what makes their history and country so rich, just like the different flowers that filled their garden.

Everyone deserves the right to freedom of religion, Ghanam explained, but for too long, minorities in Iraq were forced to hide their identity and the majority faiths fought each other for power, creating sectarian divisions that have fueled instability and chaos. But now they have the seeds for a better future.

He challenged the students to do the hard work, each day in their own communities, of planting the seeds of freedom that would bring their country peace, telling them, “The journey of a thousand miles begins with a single step.” Eventually, as generations are educated to respect human dignity, sectarian divisions will fade.

When Naqshbandi learned of the impact Ghanam and Jalal were having with displaced youth, he realized that perhaps his road forward was paved with flowers.

The ministry had designated land for Naqshbandi to landscape, but it still was barren. He had never known what to do with it.

Now, it was clear: as the religious education courses were completed by each community, students would plant a peaceful garden according to Ghanam’s lesson, thereby ensuring that a new generation of children in Kurdistan would grow up learning to respect one another and the equal dignity and rights of others.

Thanks to the efforts of a small group of determined Iraqis, the seeds of hope and coexistence have been planted for a new generation.

Tina Ramirez is of president of Hardwired, Inc.