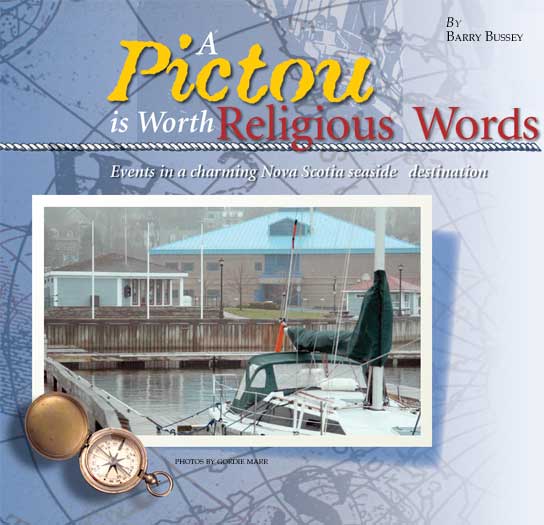 Pictou, Nova Scotia, is "a charming seaside destination steeped in Scottish culture and history" on the Northumberland Strait-a convenient stop-off point for those taking the ferry to Prince Edward Island. It is a place where one can sit back and enjoy the traditional and maritime music as it wafts across the harbor from the marina's hospitality center. Its history dates back to the 1773 launch of the ship Hector from Lochbroom, Scotland, carrying some 200 brave souls seeking a better life in the New World. 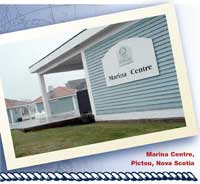 The people of Pictou are proud-and for good reason. Recently they volunteered their time and resources to build an exact replica of the Hector. The ship now plays an important role in the all-important tourism industry. Seafaring tourists tie up at the marina and join visitors from all over the world in summer celebrations on the harbor front. On the Marina Stage special events are presented by various community groups to entertain the guests. Unfortunately, the tranquil scene was marred in the summer of 2002 by a dispute over a religious drama presentation. The subsequent legal battle has become a key case in the struggle over religious speech in a public place.

Kenneth Gilliard is the pastor of Pictou's Cornerstone Community Church. He requested the use of the Marina Stage for his church's presentation of a drama, This Blood Is for You. The drama is performed by the actors in mime (without dialogue) as the song "Satisfaction," by the Rolling Stones, plays in the background. The person playing the part of the Tempter comes onstage and seeks to encourage the other actors to indulge in various vices, such as excess spending, alcohol use, drug use, and attempted suicide. In the attempted-suicide scene a young actor puts a toy gun to his head as the Tempter encourages him to pull the trigger.

Another actor comes onstage to play the role of the Believer trying to introduce the others to words of Scripture. A conflict ensues between the Tempter and the Believer over the people. The next scene is the crucifixion of Christ, with the background music changing to a song entitled "This Blood Is for You." The drama ends with the individuals accepting Jesus and being saved. Pastor Gilliard then shares a Scripture text and a brief message to end the short program.

In 2002 when the pastor approached the town for permission to use the Marina Stage, he was refused because his program "had a message" that would not be in keeping with the site objectives that the town had in mind. Exactly what those objectives were is uncertain other than that the town allowed only "lighthearted entertainment." Nevertheless, he was offered an alternative venue-a little out of the way-the Market Square Gazebo. He accepted, and his group performed on August 17 and 18, 2002. During the first presentation a woman from a restaurant across the street took offence at the fact that one of the Tempter's "helpers" had her face painted black, and still others complained about the use of the gun. There was a shouting match between various audience members, profanities were uttered, and a Royal Canadian Mounted Police (RCMP) officer was called in. But by the time he arrived, everyone had settled down. A second performance, conducted under the watchful eye of the police, went without incident.

The town was suddenly faced with a situation that was much different from its advertisement as "a charming seaside destination steeped in Scottish culture and history." It was now making history in its own right. The mayor was troubled by the "inordinate number of citizens' phone calls" about the drama. The people complained that it was loud, they didn't like the actors' faces being painted, and they didn't like the use of a gun. It appeared that the town's original fear of the presentation not being "lighthearted" suited for the venue was substantiated by the uproar.

Pastor Gilliard made a second attempt a few days later to obtain permission to use the Marina Stage. The Marina Stage had a higher profile than the Market Square Gazebo, with more traffic, making it a more desirable location. He was denied again. Being undeterred, he informed the town that he planned yet another presentation for the upcoming weekend-but this time he would be at the Marina Stage regardless of what the town said. In Canada, he maintained, he had a religious right to speak at a public place.

Not surprisingly, the next day he received a letter from the bylaws officer. The letter stated that in order to use the venue, he had to obtain a special events permit. When he called the town for information on the process of obtaining such a permit, no one at the office knew how. In fact, they had yet to create an application form or a process for such a permit. Obviously, special events up to this point had no need of a permit, but now that there was a program not in keeping with the town's objectives, a permit was needed.

Recognizing that he was getting the classic runaround, Pastor Gilliard decided that he would go ahead with the drama anyway and let the consequences fall where they may. On August 24, 2002, his group went to the Marina Stage and performed-this time with no faces painted, and no adverse reaction from the audience.

A few nights later at 11:30 p.m.-while the pastor and his wife were fast asleep-there was a loud knocking at their door. He was met by an RCMP officer with a summons to appear at Provincial Court on a charge of violating the public places bylaw for loitering on the marina property. Whatever else can be said, it was obvious that the town had shown ingenuity in coming up with such a charge against the pastor.

The Provincial Court was not at all convinced that the town's case was compelling. On March 6, 2003, the court held that the pastor was not guilty of the charge.

In the meantime the pastor wanted to do all he could to keep within the law, and decided to formally apply to the town for permission to present the drama for a third showing in September 2002. Using a letter to the town as the basis for the application, he made his request known. The town council met during an in camera meeting of the committee of the whole to discuss the request. Subsequently, a letter was written to the pastor stating two reasons his request was denied. First, the stage was booked for the New Scotland Days celebration at the exact time he requested, and second, the council considered all of the factors noted in the public places bylaw for special events and was of the view that his program did not meet the criteria.

Just to be sure, the pastor's wife went to the town office to see what was scheduled during the time they had requested, and found-not surprisingly-there were no events scheduled. The pastor then filed a complaint under the Human Rights Act. A Nova Scotia Human Rights Board of Inquiry held hearings in October 2004 and released its decision on January 31, 2005.*

The board was not impressed with the town's version of events. It held that the pastor was denied a special events permit "because the performance contained a religious message." Section 5(1) of the Human Rights Act states that "no person shall in respect of (a) the provision of or access to services or facilities. . . discriminate against an individual or class of individuals on account of (k). . . religion."

During testimony at the hearing several of the town personnel argued that the town had an "operating policy" of not allowing religion or politics on the Marina Stage. No copy of the policy could be produced-it appears to have been a general consensus. The mayor denied that such a policy was his idea, but he was contradicted by those working at the town office. They stated that they "heard the mayor say on several occasions that there was to be no politics or religion on the Marina Stage."

The board pointed out that the Marina Stage was a public facility-any citizen had a right to equal access and ought not to be discriminated against in violation of the act. The bylaws listed five criteria for a special events permit, but the board held that the town did not apply them. Nor was there a process implemented by which one could apply for a permit.

"While the Town of Pictou has the discretion to offer a service to some or all members of the public," said the board, "that discretion cannot be exercised in a discriminatory way. The town cannot ignore the law in exercising that discretion." The town was held to be in violation of the Human Rights Act. It had discriminated against Pastor Gilliard because of religion and was ordered to pay his legal costs and $6,000.00 with interest.

This summer one can expect to find in Pictou, Nova Scotia, not only "a charming seaside destination steeped in Scottish culture and history," along with the Hector lying at the wharf, but also a mime drama entitled This Blood Is forYou. In all likelihood it will be playing on the Marina Stage. Those 200 brave souls of 1773 would no doubt approve of their settlement being a land where there is freedom against discrimination because of religious speech.

* Reverend Kenneth Gilliard v. The Town of Pictou, Nova Scotia Board of Inquiry under the Human Rights Act, case no: 04-02-0034.