A Tale of Two Unions 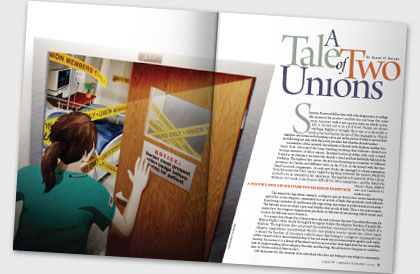 Sharlene Harwood fell in love with a theology major in college. She married the pastor—and life has not been the same since. A pastor’s wife is not an easy status in which to live.  Life is carried out as in a fish bowl. People are always watching. Rightly or wrongly, she is seen as a role model as much as her husband in the eyes of the congregation. Church members are notorious for keeping a close eye on the pastor’s family to ensure they are following not only what the pastor preaches but what the church teaches.

As members of the Seventh-day Adventist Church both Sharlene and her husband, Rick, advocated the long-standing teaching that followers should not become members of labor unions. Sharlene had no problem with such a stand. Raised as an Adventist she knew the church’s stand and had faithfully followed the teaching. Throughout her career she practiced nursing in a number of different provinces in Canada and different states in the U.S.A. as she moved with her husband’s pastoral assignments. At each new abode she managed to obtain exemption from the respective labor unions simply by applying. However the move to Manitoba proved to be an anomaly in her experience. The legislative framework of the Labour Relations Act made it much more difficult for labor exemptions, and the Manitoba Nurses Union (MNU) was not inclined to make it easy.

The Manitoba legislation exempts a religious person from labor union membership only if his or her religious community has an article of faith that precludes such follower from being a member of, and financially supporting, any union or professional association.1 The follower must also have a personal belief in that article of faith. Thus a two-part requirement: first, the religious organization precludes its followers from joining a labor union; and second, the follower must believe it.

It is ironic that Manitoba is the province selected to house the new Canadian Museum for Human Rights,2 when clearly this legislative regime violates the religious freedom of people like Sharlene. The legislation does not protect the individual conscience but rather the beliefs of a religious organization. An individual who for conscientious reasons cannot join a labor union is denied the freedom of conscience solely because they belong to a religious community that either supports labor union membership or has not made any pronouncement against such membership. In essence, it is a denial of freedom based on association! Such legislation has an incredible lack of understanding about religious freedom and the long, bloody history that gave us such freedom in Western liberal democracies.

Left unanswered is the situation of an individual who does not belong to any religious community but has a bona fide religious objection to labor union membership. Presumably even they would be without recourse.

The legislation further inhibits a person, such as Sharlene, because it lumps the requirement that the articles of faith preclude not only membership in a labor union but a “professional association.” Thus there is no apparent distinction between labor unions and bodies that govern certain professions such as medicine and law. It seems that this legislation would not give protection to those who are members of a faith community that on the one hand precludes its followers from joining labor unions but does not preclude its followers from joining professional associations such as a law society.

The Manitoba Labour Board had earlier decided the Lumsden case, with similar facts to Sharlene’s, in 1986.3 Mr. Lumsden, a Seventh-day Adventist, sought exemption from labor union membership under the same legislation. Evidence presented at that hearing included the document “Labor Unions—Seventh-day Adventist Position Statement,” which states:

WHEREAS, The Christian dare not violate his conscience by giving support to activities or policies incompatible with the principles and counsel set forth in God’s Word; and

WHEREAS, An increasing number of Seventh-day Adventists are finding it necessary to explain the position of the church in relation to joining or financially supporting labor unions and similar organizations, We recommend,

1. That the Seventh-day Adventist Church hereby reaffirm its historical position that its members should not join or financially support labor unions and similar organizations.

3. That pastors diligently inform Seventh-day Adventist Church members through sermons, personal counseling, church publications, and other media of the Bible principles and the Spirit of Prophecy counsel on which the church’s position is based. 4

A pastor gave evidence in Lumsden that “members are counseled and encouraged not to belong to or participate in trade unions,” but he clearly stated that the church does not preclude members from being a member of a union. The church leaves the decision up to the individual church member.

The board in Lumsden ruled “that members of the Seventh-day Adventist Church are not prohibited from being members of a union or actively supporting unions financially or otherwise.” Therefore, Mr. Lumsden was not exempted.

Given the Lumsden decision there was no question that Mrs. Harwood had an uphill fight to battle to be successful —on the legislation. Yet, if there ever was a compelling case to show the egregious nature of discrimination heaped on those conscientious objectors to labor union membership by the Manitoba legislation, Sharlene’s case was it. For decades (since 1977) she had gained exemptions to labor union membership throughout Canada and the U.S. as she moved with her husband from one church district to another.

At the Manitoba Labour Board hearing Sharlene gave a very passionate defense of her position. She argued her position from the Bible, from the writings of Ellen G. White, and from the official pronouncements of the Seventh-day Adventist Church— including the statement that was used in the Lumsden case 20 years earlier. When asked by her legal counsel what significance it was to her should she disregard those teachings, she replied, “I’d be going against my conscience and the teachings of the church. As a pastor’s wife—as a wife of a leader—I want to set the right example to church members. I want to put it into practice myself.”

Over the objections of the MNU legal counsel she stated that as far as she was concerned the Seventh-day Adventist Church precludes membership in labor unions. Obviously that was up to the board to decide based on the facts.

In cross-examination Sharlene was grilled on the teachings of the church—as there was one instance in 1977 she did not have labor union exemption for a couple of months but continued to work. The argument was even though she did not have exemption from labor union membership, the church did not expel her because of that fact. The lawyer noted that there are many Seventh-day Adventists who are members of labor unions and are not disciplined by the Adventist Church for being so. The reason, he maintains, is that the church does not preclude membership in labor unions.

From a literal reading of the legislation, as was done in Lumsden, which used the Black’s Law Dictionary definition of “preclude” as: "To prohibit or prevent from doing something; e.g., injunction," there can be no doubting that the Adventist Church did not “preclude” in the sense of “kicking out” of fellowship those who were members of labor unions. It was Sharlene’s purpose to challenge such a narrow interpretation of the act.

After her evidence was given and that of expert witness Professor James Beverley of Tyndale Seminary in Toronto, the hearing broke for a couple of weeks at which time alternative constitutional arguments were to be made. It was the intention of the author to make the case that if the board was to carry on with the strict interpretation of the legislation, as in Lumsden, then the legislation violated the religious freedom guarantees under the Canadian Charter of Rights and Freedoms.5

The Labour Relations Act presents a closed door to Sharlene and all other members of the Seventh-day Adventist Church, who come from a long historical religious position against joining or financially supporting labor unions. It denies them the freedoms of conscience, religion, and association and denies the equal protection and equal benefit of the law without discrimination—a denial of the Canadian promise of individuals being able to live their cultural heritage in a multicultural society.

It is clear from Canadian jurisprudence since the Charter that Sharlene’s religious freedom was denied:

First, Canada has a very broad definition of religious freedom: “In essence, religion is about freely and deeply held personal convictions or beliefs connected to an individual’s spiritual faith and integrally linked to his or her self-definition and spiritual fulfilment, the practices of which allow individuals to foster a connection with the divine or with the subject or object of that spiritual faith.”6

Second, the freedom includes public manifestation of religious belief, including declaration, practice, teaching, and dissemination. It is up to every individual to work out for themselves what his or her religious obligations, if any, should be. It is not for the state to dictate. The effect of the act in not providing an accommodation for Sharlene’s religious belief was a denial of her religious freedom as enunciated in the Big M Drug Mart case.7 She was being coerced to act against her conscience to either join the Manitoba Nurses Union or be denied employment.

Third, the right to hold a religious viewpoint without fear of hindrance or reprisal.

Fourth, the right is not absolute—it is “subject to such limitations as are necessary to protect public safety, order, health, or morals or the fundamental rights and freedoms of others.” 8

Fifth, it is the right of the individual. A fairly recent Supreme Court of Canada decision noted: “In my view, the state is in no position to be, nor should it become, the arbiter of religious dogma. Accordingly, courts should avoid judicially interpreting and thus determining, either explicitly or implicitly, the content of a subjective understanding of religious requirement, ‘obligation,’ ‘precept,’ ‘commandment,’ custom, or ritual. Secular judicial determinations of theological or religious disputes, or of contentious matters of religious doctrine, unjustifiably entangle the court in the affairs of religion.”9

We never got to make the arguments, as the MNU agreed to exempt Sharlene before the arguments could begin. Obviously seeing the writing on the wall, the MNU recognized that it would not be successful in overcoming the Charter arguments that the Manitoba legislation violated a person’s religious conscience—and they did not want a precedent. Such was a bittersweet victory. On the one hand, Sharlene obtained the exemption she sought—including the ability that should she change employers she would still be exempt. On the other hand, there still exists a discriminatory legislation that makes a mockery of individual religious freedom on the issue of labor union membership. A mockery that is in all likelihood unconstitutional—violating Canada’s promise to provide freedom of religion for its individual citizens regardless of association.

The grueling cross-examination that Sharlene was subjected to as to whether her religious community actually “precludes” membership in labor unions was most unfortunate. That is not in any way to denigrate the professionalism of the MNU legal counsel; rather, his rigorous approach is required by the section as it now stands. The question is whether such an inquiry is necessary in a “free and democratic society.” Surely it is not. The role of the state in matters of freedom of religion is to be limited to determining whether a belief of an individual is sincerely held, and that it does not offend public safety, order, health, or morals or the rights of others—to go beyond that, “nothing short of a religious inquisition would be required to decipher the innermost beliefs of human beings.”10