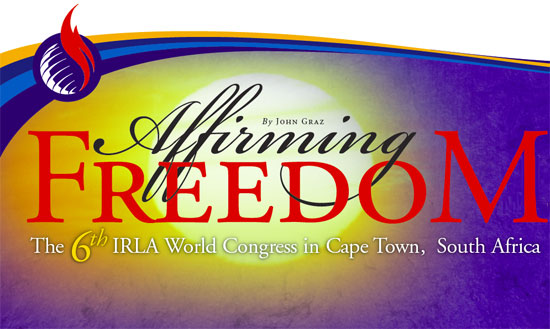 The Sixth World Congress organized by the International Religious Liberty Association was its first world congress organized in Africa, and the biggest yet, with more than 600 attendees from all over the world. Our two previous congresses (Rio de Janeiro in 1997) and (Manila in 2002) had a little more than 350 participants. This time we were obliged to begin limiting the registration one month before the opening meeting at the 620-seat Cape Town International Convention Center. We had at that point already more than 535 registered participants. The final figure was well over 600.

The three-day congress began on Tuesday, February 27, 2007, in Cape Town, Republic of South Africa. The theme "Combating Religious Hatred Through Freedom to Believe" favored dialogue and discussion among the experts and religious leaders. Of course, the purpose of any religious liberty congress and symposium is to promote religious freedom by encouraging dialogue. It is so important that experts and government officials listen to one another and learn about violations of and improvements in religious freedom. A religious liberty congress also gives opportunity for attendees to renew their own commitment to this fundamental freedom.

Why such a congress in Africa? Religious freedom was not a major issue in the subcontinent for centuries. Today it is more and more threatened. Regional religious wars are a real possibility. In facilitating exchanges among Muslims, Christians, and Hindus at a conference such as this shows traditional religions that one can have strong convictions and respect the convictions of others—we can live together in peace! Persecution and fanaticism are not an answer to religious hatred; they just spread it.

In his welcome to attendees, Paul Ratsara, president of the IRLA in the southern African region said: "We are here to affirm and assert our belief that religious liberty is a God-given right. We are here to affirm with love, yet with strong conviction, our belief in the natural and inalienable right of freedom of conscience—to have or not to have a religion." Religious freedom is the core of all freedoms and a basic human right. Coming to South Africa made sense if religion is understood in such a way.

International Religious Liberty Association president, Denton Lotz, stated in his keynote address: "Our goal is more than just coexisting together on Planet Earth; but rather our goal should be proexistence, living together faithfully for a righteous and just society of all people, especially the poor, the persecuted and downtrodden."
The congress opened its door to the Cape Town Interfaith Initiative leaders representing the main religions, including African Traditional Religion. A panel led by Anglican Father John Oliver focused on racial and religious solidarity in South Africa. While the majority of the participants were from Africa, important delegations came from as far away as Russia, Brazil, and the Inter-America region.

The program included 30 main speakers and 15 workshops with 60 panelists. Reports about the state of religious freedom around the world were given by 28 IRLA regional secretaries and nongovernmental associations. The United States of America was well represented among the guests—and their presence was underscored by guest speakers Ambassador Robert Seiple, former United States Ambassador–at-large for International Religious Freedom, and Bishop Ricardo Ramirez, a member of the U.S. Commission of International Religious Freedom. The presence of both a public defender of the Republic of Georgia and an advisor to the former president of Iran showed the interest such a congress creates from its location. The premier of the Western Cape Province and the mayor of Cape Town gave magnificent speeches and encouraged the IRLA to keep on promoting religious freedom for all.

The congress participants stayed on in the city a few more days to visit the nearby Robben Island, where Nelson Mandela served an 18-year-long sentence before becoming president of the Republic of South Africa. What a symbol it is! It teaches us never to give up even if darkness seems to cover the world. As long as one man or one woman stays faithful to the principle of freedom, the light is shining, showing the right direction. Forcing people to have or to give up a religion is a major denial of human rights. Religious freedom has to be a nonnegotiable principle.

As intolerance and fanaticism increase, there is an even greater need for a strong voice to proclaim that everyone has the freedom to choose, to have or not to have a religion, and recognition that all states should protect this essential freedom.

As a close to our time together many congress participants and visitors from local churches met March 3 for a Festival of Religious Freedom. Nearly 4,000 people crowded into a large auditorium for the event. If an IRLA congress is first a meeting of experts, religious leaders, and officials, then a festival is truly the event for all the people. Further festivals with more than 10,000 people are being planned in Angola, Peru, Brazil, and other places in the next year. The next IRLA World Congress in 2012 will surely continue the model of being a major world forum for religious freedom.