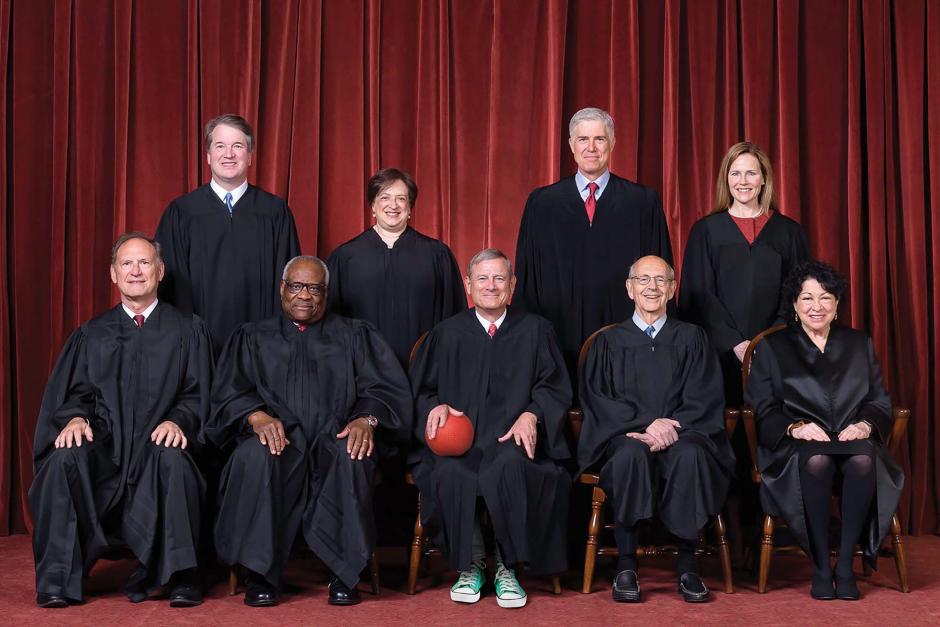 Growing up in the 1980s, like countless elementary school students before me, I played dodgeball whenever going outside was not an option. We chose teams, lined up in the gym, and hurled soft(ish) balls at each other, and whoever did not get hit was crowned the victor. It was just one of the many Darwinian games we played in less-enlightened times.

We don’t know for sure if Supreme Court chief justice John Roberts ever played dodgeball during his childhood in the 1960s, but based on his opinion in Fulton v. City of Philadelphia, he certainly seems to have learned how to dodge, duck, dip, dive, and dodge some more.

The issues in Fulton are straightforward. The city of Philadelphia contracted with a number of social services agencies, including Catholic Social Services (CSS), to provide foster and adoption services. In 2018 an article appeared in the Philadelphia Inquirer focused on another Christian agency and its refusal to work with a same-sex couple. Soon after, the city of Philadelphia launched an investigation into the practices of some of the religious agencies it contracted with, but did not make inquiries into the practices of its secular agencies.

Within days the city suspended its contract with CSS. Despite an urgent need for foster families in Philadelphia, anyone certified by CSS was no longer eligible to receive foster children. Foster parents with placements previously made by CSS were not forced to give up their kids, but CSS could make no new placements.

The city also told CSS that unless it changed its ways and, contrary to its religious beliefs, agreed to provide services to same-sex couples, its annual contract would not be renewed. CSS was unwilling to comply, and thus found itself effectively out of the business of helping foster children.

Litigation ensued, with the city of Philadelphia prevailing at the trial and appellate court levels. While the rulings had a number of nuanced and technical twists and turns, the reason CSS lost came down to one case: Employment Division, Department of Human Resources of Oregon v. Smith, 494 U.S. 872 (1990)—often just shortened to Smith.

This was a decision authored by Justice Antonin Scalia that set off a metaphorical bomb within the world of religious liberty. In this case, two counselors at a drug rehabilitation clinic were fired for, in an ironic twist of circumstances, using drugs. They claimed they should be entitled to receive unemployment benefits because the drug they ingested, peyote, was used as part of religious ceremonies they practiced as Native Americans.

Twice the case wound its way to the U.S. Supreme Court. The incendiary core of Justice Scalia’s 5-4 opinion was that a “neutral, generally applicable” law did not run afoul of the First Amendment’s free exercise clause. Therefore, because the law was not aimed at Native Americans, it simply had an incidental effect on them and was consequently valid.

It is hard to overstate the intense concern this opinion generated at the time. Suddenly the portion of the First Amendment that said “Congress shall make no law . . . prohibiting the free exercise [of religion]” now meant simply the government could not discriminate against religion. The Supreme Court seemed to be saying that as long as a law impacted more than just people of faith, it would be constitutional.

Some 30 years later the lower courts used the Smith reasoning to rule against CSS. The trial court and appellate court said that, just like a law banning drug use, the requirement that social service agencies not refuse to work with same-sex couples was exactly the type of neutral law that applied equally to everyone. It did not matter that the law fell heavily, if not exclusively, on religious agencies. Because it applied to everyone, it was constitutional.

The Supreme Court agreed to hear the case, and it was at this point that Justice Roberts’ dodge-ball skills came in handy. Unlike grade-school kids fighting for schoolyard glory, though, this game was a lot longer and the stakes infinitely higher.

Both parties arguing the case were hoping for a definitive win. CSS wanted the Court to clearly rule that the city could not act this way in the future and hopefully, in the process, overrule Smith. The city of Philadelphia was hoping the Court would reinforce the Smith opinion and make clear that the city’s nondiscrimination rules were acceptable.

First and perhaps most important, Roberts was able to manufacture a “unanimous” decision—something hardly anyone thought possible. But he did this in a way that was paper-thin, doing little to conceal the deep divisions within the Supreme Court regarding how future cases should be approached.

In order to get unanimity, Roberts could not take Smith on directly; he needed to find a different way out. The city’s regulations and contract did say that agencies such as CSS could decline to serve a same-sex family if the commissioner granted an exception “in his/her sole discretion.” The evidence showed that this exception had never been granted and that the city said it would never grant one, but it was enough for the Supreme Court. Hanging its hat on this exception provision in the contract, the Court found for CSS, saying the Smith standard did not apply because the rule was not neutral and generally applicable.

It does not take a constitutional lawyer to see the limits in this logic. The city of Philadelphia lost because it included a contractual exception that it has never invoked. It seems beyond obvious that the city can solve this problem simply by removing the offending exception.

Justice Alito, joined by Justices Thomas and Gorsuch, made this point in his 77-page concurrence. He described the majority opinion as one that “might as well be written on the dissolving paper sold in magic shops,” and saw no reason not to revisit Smith. Alito then proceeded to devote a vast amount of ink to explaining why Smith was wrongly decided. His view, though, garnered only three votes.

The other two conversative justices, Barrett and Kavanaugh, seemed to agree with Alito but were worried about what would come after overruling Smith. The challenges of allowing a robust free exercise clause are not insignificant. Religious beliefs are many, widely varied, and not subject to natural constraints. While peyote use among Native Americans predates not just the creation of the United States but 1492, it is easy to see how others might attempt to clothe all manner of behaviors in the garb of religious freedom.

Which of course raises the question: what is the long-term plan of Justice Roberts and the Court? First, anyone who is not John Roberts (or at least a Supreme Court justice) who attempts to answer that question is merely speculating. There is nothing in either Roberts’ 17-page opinion or in any of his other opinions or comments that gives a definitive answer.

The Court’s most immediate goal was, apparently, to kick the can down the road, or perhaps to kick it off the road—but more on that later. With the country recovering from a divisive election and in the midst of the most active discussion since 1937 about packing the Court, Roberts was undoubtedly happy to chalk up a “W” and leave the broader constitutional issues for another day.

The question of what would replace Smith should not be underestimated. There was a standard before Smith in a case called Sherbert v. Verner, 374 U.S. 398 (1963). This standard was also the one that Congress attempted to reinstate when it passed the Religious Freedom Restoration Act in 1993. The Supreme Court later said that law did not apply to the states.

Going back to a version of the Sherbert test would have some appeal, but the Supreme Court had curtailed that standard well before Smith was handed down. Most famously, or perhaps infamously, the Court refused to rule for a Jewish Air Force officer who wanted to wear a yarmulke. With precedent like that, the Supreme Court would have to work hard to give a revived Sherbert test some meaning.

But there is perhaps a different path the Court could take. It is one that, instead of overruling Smith, makes it less relevant. This is, so to speak, a kick-the-can-off-the-road approach. Smith on its own terms contemplates neutral, generally applicable laws. However, whether such laws, seen in the right light, actually exist is another question.

Laws by their very nature draw lines, make distinctions, and often have exceptions. Take one of society’s oldest, most well-established prohibitions, that against murder. If you are in law school and trying to set the outer bounds of what a free exercise clause does and does not protect, the prohibition against homicide is a safe bet. No matter how sincere, well established, or long held your religious belief, you’re not going to be able to sacrifice a vestal virgin, regardless the moon phase.

But are state murder laws truly neutral and generally applicable? Exemptions are made for self-defense but not religion. Twenty-seven states and the federal government have a death penalty. Does this mean churches are free to invoke Leviticus 20:10 and reinstate the death penalty for adultery? In a word, no. Putting aside legal doctrines like compelling governmental interest (which the prohibition of murder would easily satisfy) courts are not going to start examining every law with this level of scrutiny for secular exceptions that do not exist for religion.

This approach does clearly illustrate, though, how a case like Smith might become less significant going forward. If courts start ramping up the scrutiny they give statutes that contain any type of exception, then fewer and fewer will be seen as truly “neutral and generally applicable.”

The demise of Smith has been both prayed for and feared since it was first handed down more than 30 years ago. Despite multiple attacks, both legislative and judicial, Smith still survives. But for the first time there seems to be a majority of Supreme Court justices now on record saying it needs to go. It remains to be seen whether that entails an explicit overturning of Smith, simply reinterpreting it, or some other approach. Just be certain that when everyone else is standing on the sidelines, Roberts is likely to be left holding the ball, having vanquished everyone else.