An Issue of Church Autonomy 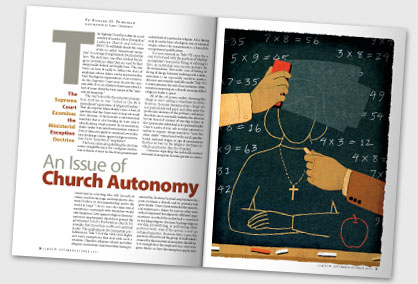 The Supreme Court has taken on a case entitled Hosanna-Tabor Evangelical Lutheran Church and School v. EEOC.1 It will likely decide the scope of the so-called "ministerial exception" to coverage of employment discrimination laws. The doctrine is one often invoked by religious institutions when they are sued by their clergy under federal civil rights laws. The case turns on how broadly to define the class of employees whose claims can be resisted on this basis by religious organizations. As it is wont to do, the Supreme Court may decide the case narrowly. If so, it is likely to leave unresolved a host of issues about the basic nature of the "ministerial exception."

The courts describe the ministerial exception doctrine as one "rooted in the First Amendment's guarantees of religious freedom." That description immediately raises a host of questions that the Court may or may not reach in its decision. Is the doctrine a constitutional mandate that is also binding on state courts adjudicating employment discrimination claims under state antidiscrimination statutes? Does it then also apply to common law retaliatory discharge claims against religious institutions by its "ministerial" employees?

The basic rationale underlying the doctrine seems straightforward. For a religious institution to thrive, it must be free from government constraint in selecting who will "preach its values, teach its message, and interpret its doctrines both to its own membership and to the world at large."2 At its core, the ministerial exception is a principle with which few would take exception. Laws against religious discrimination in employment should not permit the government to tell a Presbyterian church, for example, that it must hire a rabbi as its spiritual leader. The employment discrimination prohibitions in Title VII of the 1964 Civil Rights Act carry exemptions that deal with such a situation. Churches, religious schools and other religious institutions may limit their hiring to individuals of a particular religion. Also, hiring may be on the basis of religion, sex, or national origin, where the requirement is a bona fide occupational qualification.

It is not unusual in Title VII cases for a court to be faced with the question of whether an employer's reasons for firing, or refusing to hire, an individual were merely pretexts for discrimination. But in the case of hiring or firing of clergy, however, making such a determination is an especially sensitive matter. Because one remedy available under Title VII is reinstatement, the risk of an erroneous determination imposing on a church an unqualified religious leader is great.

All of this, of course, makes choosing the clergy as one's calling a sometimes perilous decision. In many denominations clergy are not particularly well paid, and often enter the profession unaware of the pettiness and prejudice that can occasionally underlie the decision by the board of a house of worship to hire or fire a particular individual as its spiritual leader. Courts rarely if ever ask to what extent it is unfair to require clergy merely to "turn the other cheek" when faced with racial, gender-based, national origin, or age discrimination that has no basis in the religious doctrines on which a particular church is founded.

Concerns regarding the judicially created ministerial exception become greater as courts extend the doctrine beyond employment disputes between a church and its primary religious leader. Courts have extended the ministerial exception to claims by various other individuals employed by religiously affiliated organizations in which the individual is involved in teaching religious doctrine, leading religious worship, proselytizing, or performing other pastoral work, even if the person is not an ordained minister. Hosanna-Tabor raises the question of how broad the group of individuals covered by the ministerial exception should be. Is it enough that the employee has some religious duties, or does the exemption apply only if the person's primary duties are religious? The Sixth Circuit, which decided Hosanna-Tabor, opted for the "primary duties" approach.

The case was filed by Cheryl Perich, who was a teacher at an elementary school affiliated with the Lutheran Church Missouri Synod. The school holds itself out as providing a Christ-centered education and says that its staff are Christian role models who integrate faith into all subjects. Perich began as a "contract teacher"; however, within a year she completed sufficient religious classes to become a "called" teacher, giving her a sort of tenure. Perich taught math, language arts, social studies, science, gym, art, and music. She also taught a 30-minute religion class four days per week, led her class in a brief prayer three times each day, and accompanied her class to chapel once a week. Twice a year, in rotation with other teachers, Perich led the chapel service. For five years Perich taught kindergarten, and then taught fourth grade for one year. That class involved an extra five- to 10- minute devotional each morning. Her religious activities consumed at least 45 minutes of her seven-hour school day.

The Sixth Circuit concluded that Perich was not a "ministerial" employee, so she could move ahead with her claim that she was fired in violation of the Americans With Disabilities Act (ADA) when the school refused to take her back after an eight-month disability leave of absence for a condition eventually diagnosed as narcolepsy. The school had concerns about changing teachers for her fourth graders midyear, and also had questions about whether Perich was attempting to return too quickly in light of her physical condition. However, her ADA claim was based primarily on the school principal's statement to Perich that her threat to sue under the ADA justified revoking her "call."

In the view of the Sixth Circuit, neither Perich's "call" nor her religious duties were enough to make the ministerial exception applicable. Her duties after she became a "called" teacher were identical to her duties before that. Despite the school's statements about integrating religious and secular subjects, Perich claims she rarely did so. Accordingly her "primary" duties were not religious, and her firing implicated no church doctrines and involved no theological disputes. The ADA by its terms explicitly permits religious organizations and religiously affiliated schools to give an employment preference to individuals of a particular religion and allows religious organizations to require employees to conform to the religious tenets of the organization.

Determining who qualifies as a "ministerial employee" in religiously affiliated elementary and secondary schools poses a special problem. Many of these schools, like the one in Hosanna-Tabor, say that their entire curriculum is suffused with religion. If that is so, then all their instructional staff is involved in teaching religious values and interpreting religious doctrine. Many parochial schools, however, fail in practice to carry out their promise to endow the three R's with theological meaning. Interestingly, the reason for this failure is rooted in a related constitutional development.

Teaching a history or literature or art curriculum suffused with religion requires textbooks and materials that facilitate that mission. However, decades ago a Supreme Court decision that permitted state governments to "lend secular—but not religious—textbooks to parochial school students virtually assured that the temptation to accept government aid would lead schools to create a curriculum that likewise centered on secular materials in parts that were separate from classes that focused on religion.4 The establishment clause in part reflects concerns of colonial leaders (such as Roger Williams) who worried that mixing of church and state would lead to the state "watering down" church doctrine. As religious schools moved from an integrated curriculum intertwining the religious and the secular to separate religious and secular segments, exactly that kind of watering down took place. The lure of free textbooks was enough to cause some churches to give up on the idea of a unified curriculum.

In 2008 private elementary and secondary schools in the United States employed 456,000 teachers.5 A large percentage of these private schools are religiously affiliated. A broad interpretation of who is covered by the ministerial exception could lead to eliminating employment protections even for many nonteaching staff. Many nonteaching employees can be seen as implementing part of the school's religious mission in its broadest sense. Thus the cook in the kosher cafeteria of a Jewish day school, the school nurse in a Catholic middle school, or the recess monitor in a Christian elementary school arguably all have a role in spreading religious values. A broad definition of ministerial employees may deprive a significant number of individuals of protections against arbitrary treatment. From the perspective of the school, however, the issue is not arbitrariness, but the need to justify religion-based decisions to a court in the face of charges that religious doctrine was a pretext. The Catholic middle school, for example, will be required to prove that the school nurse was in fact fired because she subtly encouraged students to learn about the use of condoms and not because she was nearing 60 years of age. The Supreme Court's decision in Hosanna-Tabor, implicitly or explicitly, will decide whether we consider that an unacceptable burden to place on religiously affiliated schools, churches, and other religious institutions.

Howard M. Friedman is professor of law emeritus for the University of Toledo College of Law and has taught law at Notre Dame University, Case Western Reserve University, St. John's University, and the University of North Dakota. He is the founder of Religion Clause, a blog devoted to legal and political developments in the free exercise of religion and the separation of church and state.