An Open Letter to America 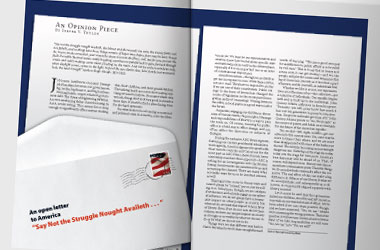 “Say not the struggle nought availeth, the labour and the wounds are vain, the enemy faints not, nor faileth, and as things have been, things remain. If hopes were dupes, fears may be liars; it may be, in yon smoke concealed, your comrades chase e’en now the fliers, and, but for you, possess the field. For while the tired waves, vainly breaking, seem here no painful inch to gain, far back through creeks and inlets making, came silent, flooding in, the main. And not by eastern windows only, when daylight comes, comes in the light, in front the sun climbs slow, how slowly, but westward, look, the land is bright” (Arthur Hugh Clough, 1819-1861).

Job losses. Ineffective economy. Strange relationships between our government, big media, big finance, and big business. Unimaginable, unprecedented government debt. The threat of frightening inflation. An ever-weakening dollar. America losing its AAA credit rating. This messy list is long enough to significantly affect anyone reading this, their children, and their grandchildren. The talking heads are out in force saying anything we want to believe. No matter which way we look, things don’t look very good in America these days. It’s hard to find a silver lining even for die-hard optimists.

For what looks to be a looming economical and political crisis in America, none the likes of which we have seen before, we can’t place all of the blame on Uncle Sam. Yes, the government has let us down in so many costly ways—and continues to do so. Corporate corruption and greed have us paying a high cost, too—all the while government leaders and agents have shown themselves to be either complicit with the corruption, or stand idly by like Shultz in Hogan’s Heroes, seeing and doing nothing, either way participating by commission or omission for their own short-termed and short-sighted personal advancement, enrichment, or political safety. Easily, these leadership failures share part of the blame.

These in the popular news sectors are not doing what they are supposed to be doing. There is not much reporting going on in the main media centers unless it is hacking away at some left- or right-wing agenda—partisanship is alive and well in the media; and many of us are entertained by a good fight. The personalities in the news media seem to be off-task as they take their competitors to task, incite and fan feuds between individuals, then report on the reportage, incestuously—feeding the drama to keep it going as long as people tune in, buy the rags, and Google the stories—all the while crooks are stealing America blind, and the government is growing larger, preoccupied with grabbing up more power to itself left and right. The recent collaboration between the current administration and ABC News was unprecedented and appears strikingly similar to the status quo tactics of nations in which any freedom to debate politics and policy is not allowed—in which the press is just another arm of the government. Not helping and becoming more irrelevant, yet increasingly in bed with interests each day, the media shares part of the blame.

And “the people” just want to be saved. Somebody (else) do something! Seems we’re to blame too. It’s all very organic: Altogether it is becoming a prelude to a perfect storm for the end of our way of life as we have come to know it—and we, the people, will be both responsible and pay handsomely for the demise of our own republic if it happens.

We are a republic in America. Just because we freely elect our representatives does not mean that the body politic is incapable of making mistakes. It appears that we, the people, have made mistakes. We keep putting people into public office even when they have proved they are not helping but hurting America. We put them there in office; we can take them out as well. This outputting or inputting of our elected leaders is always possible, of course, as long as we retain our constitutional liberties, i.e., our rights to gather, speak, bear arms, etc. These are a few of the liberties that Americans have died to sustain.

I do believe it is possible to lose these liberties for what appear at the time “expedient circumstances.” We, the people, can voluntarily vote ourselves as individual citizens into weaker positions, granting more power to our “savior,” the government. We trust them with this, our most “sacred” commodity, and give it up—and it does not come back in equal measure. We adopt these losses of liberty in trade for illusions, and at great peril. History has shown us time and time again what happens when the government gets too big and powerful—where the complete loss of personal liberty follows close behind.

Be an involved constituent. Most politicians want to get reelected. It’s easy to say, “Ah, things will be OK,” and be content to do nothing in the interest of the direction America will take.

This generation cannot coast into a better tomorrow. We must let our representatives and senators know how we feel about specific state and national policies early in the debate phase, especially if it is an important one or an issue of constitutional importance.

Avoid form letters—though we are likely to get one in response to ours. Write them a letter, not an e-mail. They have to respond to a letter if we are one of their constituents. Public outrage in the form of letters has changed the course of legislation in the recent past (immigration and port ownership). Writing letters to the editor in local papers is a good way to infect the forum.

As parents, engaging our children in discussions of current events, the principles, blessings and responsibilities of liberty is a way to pass the torch on. Of course, running for public office is a bold way to effect change, and can often affect the direction or subjects of dialogue.

During the exclusive ABC News segment, featuring our current presidential administration’s agenda, America appeared to speak with their remote controls and tuned out for the most part as ABC News showed much lower viewership numbers than expected—ABC is asking for an investigation into the Nielsen Rating. Involvement can sometimes be as easy as turning the channel. There are many other accessible ways for us to be involved citizens, as well.

Tipping points occur in funny ways and cannot always be “caused,” per se, just by willing it so. Sometimes, though, we are catalysts if we throw in and actively engage in our sphere of influence. We do not always have a measurable impact on other people or society; but when we do, we want that impact to be in favor of liberty. Even if we do not care about these realities, we leave our unique imprint on society as strongly or as weakly by what we choose to do as by what we choose not to do.

Things were not that different way back in Plato’s day when he wrote these straightforward words of warning: “The price good men pay for indifference to public affairs is to be ruled by evil men.” This is to say that as messy as it seems now, it can get messier—and we, the people, will plot the course and determine this leg of America’s journey as it becomes a part of history; and do it we will, as individuals first.


Whether we like it or not, our representatives are reflections of us—the collective—yet a collective of individuals. Our republic begins with and is built upon the individual. John Quincy Adams addresses us from his grave: “Posterity: you will never know how much it has cost my generation to preserve your freedom. I hope you will make good use of it.” John Quincy Adams points to “we, the people” as the source of power, and holds us accountable for the future of the American republic.

Yes, we did—left, right, middle—get ourselves into this current mess. Yes, some may be more to blame than others, and we are more than disappointed with some of the leaders we elected. The world is becoming an increasingly dangerous one. Yesterday set the stage for today; today sets the stage for tomorrow. America’s best days may still be ahead of us. That, of course, will depend on us. History says democracies have a termination point. The little things we do as individuals eventually affect the collective. The real effect of this can make a big difference in defense of our liberty if what we do as individuals, and subsequently as a collective, is consistently aligned squarely with liberty in mind.

Let it never be said that this generation failed our children, stood by and left America to perish on our watch for lack of effort. We’ve been asked if we can create positive change; and we have answered, “Yes, we can.” Maybe we’re answering the wrong question. The better question is will we turn America back to better days? If we take responsibility, we will turn “Yes, we can” into “Yes, we will!”