And the Crowd Roared “Freedom” 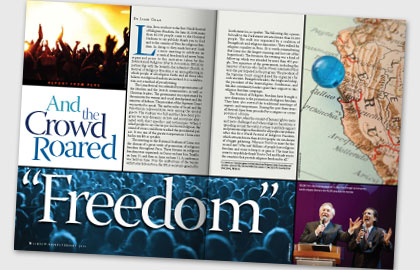 Lima, Peru, was host to the first World Festival of Religious Freedom. On June 13, 2009, more than 40,000 people came to the National Stadium to say publicly thank you to God and to the country of Peru for religious freedom. In doing so they made history! Such a mass meeting to celebrate an essential freedom had never been organized prior to the initiative taken by the International Religious Liberty Association (IRLA) in partnership with the Seventh-day Adventist Church. A Festival of Religious Freedom is an open gathering in which people of all religious faiths and all those who believe in religious freedom are invited. It is a celebration, not a method of proselytizing.

The Lima festival was attended by representatives of the Muslim and the Jewish communities, as well as Christian leaders. The government was represented by the minister for women and social development and the minister of defense. The president of the Supreme Court was invited to speak. The ambassador of Israel and the Palestinian representative were among the special guests. The stadium was full and the three-hour program was very dynamic. Artists and musicians alternated with short speeches and testimonies. When I asked people to say Gracias por la Libertà Religiosa, the sound of voices could have reached the presidential palace. It was one of the greatest experiences I have ever had in my life as speaker.

The meeting in the National Stadium of Lima was the climax of a great week of promotion of religious freedom throughout Peru. Three forums on religious freedom were organized: in Cuzco on June 9, in Trujillo on June 10, and then in Lima on June 11. A conference was held on June 10 in the auditorium of the Senate with Pastor Edson Rosa, the IRLA secretary-general for South America, as speaker. The following day, a peaceful walk to the Parliament attracted more than 10,000 people. The walk was organized by a coalition of Evangelicals and religious minorities. They walked for religious equality in Peru. (It is worth remembering that Lima was the longest running and last site of the Inquisition!). The forum in the evening was a kind of follow-up, which was attended by more than 400 people. Two ministers of the government, including the minister of justice who had just been nominated that very day, participated in the program. The president of the Supreme Court congratulated the organizers for such an event. Evangelical leaders, the Anglican bishop, the president of the Interreligious Conference, and Muslim community leaders gave their support to this religious freedom campaign.

The Festivals of Religious Freedom have brought a new dimension to the promotion of religious freedom. They have also revived the traditional meetings of experts and symposiums. During the past three years all festivals have been preceded by a congress or a symposium or a forum.

Nowadays, when the concept of human rights is more and more challenged and when religious fanaticism is spreading around the world, it is time to publicly support and promote religious freedom for all people everywhere. After this first World Festival of Religious Freedom, which attracted more than 40,000 people, we can dream of a bigger gathering. Why not 70,000 or more for the second one? Why not? Billions of people love religious freedom and want to keep it or gain it. The time has come to say publicly thank You to God and thank you to the countries that provide religious freedom for all.”

Dr. John Graz is Secretary-general of the International Religious Liberty Association and secretary- general of the Christian World Communion. A Swiss by birth, he writes from Silver Spring, Maryland.