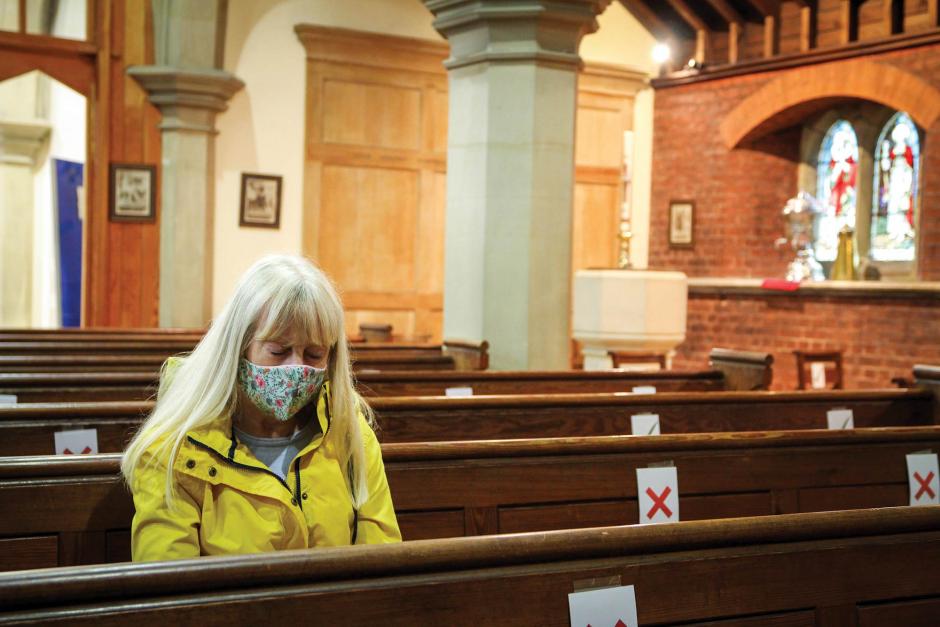 On February 6, 2021, nearly a year into the COVID-19 shutdowns, the Supreme Court issued an injunction blocking the state of California’s ban on indoor church services. The Court did indicate that current restrictions on singing and percentage occupancy can remain in place.

California had instituted a tiered system, where restrictions in some parts were more severe than others, depending on the number of COVID-19 cases in a region. Still, critics argued that the tiers were arbitrary. For instance, large stores could remain open, while shopping malls were closed for a while. Theme parks such as Disneyland had to close, but Sea World reopened under a “Zoos and Museums” exemption. Manicurists could not work indoors, while hair salons could reopen. Outdoor dining was encouraged and then discouraged. On tribal land, outside the jurisdiction of the state, casinos reopened while those in the state’s jurisdiction remained shuttered. Government employees and large retailers’ employees continued to receive their paychecks, while small business employees were often laid off.

During times of national stress people tend to seek out houses of worship, but in the pandemic age, people looking for spiritual assistance were forced to meet online. Elderly individuals and those without access to fast Internet connections simply stayed home in silence. If their church was meeting outdoors, they needed to find people to share cars with or sit outside exposed to the winter elements. Evangelism was at a standstill, and people not already attached to congregations would have a much more difficult time making these community connections.

While the state claimed that it had scientific evidence that there was a high risk of exposure of meeting indoors, they did not produce evidence to the satisfaction of the Court that this risk could not be mitigated through social distancing, masks, or other forms of protection. Yes, the state had a compelling interest in preventing the spread of COVID-19. Still, the solution of an outright ban on indoor worship was not narrowly tailored to advance that objective, so the state’s effort failed to meet the legal strict scrutiny test.

Six of the justices agreed that the ban on indoor church services, which was unique to California, went too far, but disagreed on whether the state could enforce occupancy restrictions or prohibitions on singing or chanting.

Chief Justice John Roberts wrote that although the courts should give “significant deference” to state officials, it had its limits. He wrote, “The State has concluded, for example, that singing indoors poses a heightened risk of transmitting COVID–19. I see no basis in this record for overriding that aspect of the State public health framework. At the same time, the State’s present determination—that the maximum number of adherents who can safely worship in the most cavernous cathedral is zero—appears to reflect not expertise or discretion but instead insufficient appreciation or consideration of the interests at stake.”

Justices Neil Gorsuch and Clarence Thomas, joined by Justice Samuel Alito, wrote that California’s restrictions on worship should be abandoned. They observed that television programs had hosted studio audiences and filmed singing competitions while churches could not meet or sing.

Justice Amy Coney Barrett, who has recently joined the Court, wrote an opinion joined by Justice Brett Kavanaugh, agreeing that churches could meet but saying that churches should show that the singing ban was inappropriate.

Justice Elena Kagan, joined by Justices Stephen Breyer and Sonia Sotomayor, wrote that epidemiologists and elected officials should take precedence over the free exercise of rights because the “experts” are “desperately trying to slow the spread of a deadly disease.”

This decision follows on the heels of the November decision in which the Court voted 5-4 to stop New York from enforcing attendance limits on houses of worship.

In response to the ruling, some churches chose to resume indoor church services while observing social distancing protocols, while others decided to remain closed. Many churches are offering a hybrid program during which parishioners can either attend in person or view services online.

The Court’s injunction does provide an opportunity for Governor Gavin Newsom to develop further the argument for keeping churches closed. Still, so far the evidence presented has not convinced the Court that it is essential to shelve the First Amendment during a time of stress.

If the shutdown of churches is not a religious liberty issue, then it is hard to imagine what would qualify. Throughout history nearly all impositions on religious liberty were claimed to be for the safety of the people, either for their temporal or eternal souls. In 2019 nobody anticipated that during the next year, church services would be banned, and that those who wished to quietly meet together would have to do so underground, and that those privately gathering in homes would be threatened with punishment. Whether this has to do with religious animus or some grander, more beneficent theme, the effect is the same—churches could not meet. If the Supreme Court’s decision had gone the other way, California congregations that dared to use their buildings would be subject to severe state sanctions, including fines or imprisonment. Different states have understood that restrictions to prevent the spread of COVID-19 can be put in place without shutting down churches. California should work to narrowly tailor its regulations to actually advance public safety with a minimal impact on religious freedom as well.