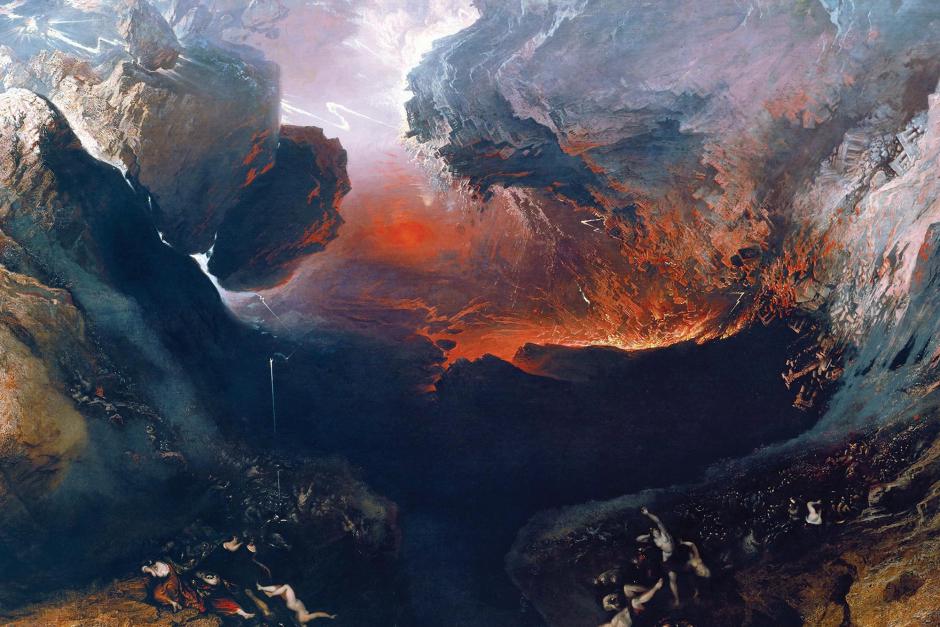 Responding to reactions by some Christians to the 2004 Indian Ocean tsunami and earthquake, the inimitable David Bentley Hart wrote about“the sadistic bellowing of a self-described‘fundamentalist’ preacher in Virginia, attributing the disaster to God’s wrath against the heathen and then exulting in the spectacle of God’s sublime cruelty; the cheerful morbidity of another preacher, airily reminding minding us that some of the countries affected are notorious for the persecution of Christians,” and so forth.

Such “sadistic bellowing,” however, hasn’t been limited only to calamites befalling the godless “heathen.” Even the United States, about as “Christian” a nation as exists now, hasn’t been spared the oracular invective from those who have declared that everything from the Civil War to September 11, and that every calamity in between, before and afterward, has been God’s judgment upon a sinful nation.

After all, if, as the Good Book says, “righteousness exalts a nation, but sin is a reproach to any people” (Proverbs 14:34),* and if, as it does, the same book has repeatedly warned about the Sovereign’s divine wrath falling upon evil and upon evil nations—might we, then, be well advised to pay heed to such “sadistic bellowing,” however offensive it might be to our carnal hearts?Or what if enough people sought the strong arm of the state to do whatever deemed necessary to avert God’s impending wrath?

Even in our modern, or postmodern (or, as it has been called, our altermodernist or cosmodernist or Digimodernist or post-postmodernist), era, the idea of calamities being the result of divine wrath remains part of our collective psyche. Perhaps, in a desire to make sense of reality, and to believe that reasons exist for the horrifically unreasonable evils that we face, Homo sapiens have a natural tendency to attribute calamities to some sort of transcendent or cosmic order, to try to see some justice in what seems to so unjust. This tendency is especially true for Homo sapiens christianus, those who believe in a God who is just and who has said, “I will punish the world for its evil, and the wicked for their iniquity” (Isaiah 13:11).

For instance, after September 11 many believed that the tragedy was, indeed, divine punishment.Shortly after the attacks, the late Reverend Jerry Falwell opined that God had allowed the attacks because the United States had become a land of “pagans, abortionists, feminists, gays, lesbians, the American Civil Liberties Union and the People for the American Way.” (Though he later apologized, at least to gays and lesbians.)

The radical Westboro Church, whose claim to fame has been to picket the funerals of dead American soldiers (“Thank God for dead soldiers!” “Pray for More Dead Soldiers”) has more than once said that September 11 (“Thank God 4 9/11” and “God’s Wrath = 9/11”) was divine punishment on the United States. (And these folks apologize for nothing!)

Former presidential candidate Michele Bachmann also suggested that September 11 was the result the Almighty’s disapproval. “Our nation has seen judgment,” she said, “not once but twice on September 11, and that’s why we’re going to have ‘9-11 Pray’ on that day.”

Some, too, saw Hurricane Katrina as divine retribution.Evangelist John Hagee told National Public Radio that “New Orleans had a level of sin that was offensive to God,” because “there was to be a homosexual parade there on the Monday that the Katrina came.” (Hagee, later, under pressure, backed off.)

An article on Beliefnet was titled, “Katrina: God’s Judgment on America.”

One website believed that Katrina was God’s punishment on America because America had encouraged the Israelis to leave Gaza. “We don’t have prophets who can tell us exactly what are God’s ways, but when we see something so enormous as Katrina, I would say [then President] Bush and [then Secretary of State Condoleezza] Rice need to make an accounting of their actions, because something was done wrong by America in a big way. And here there are many obvious connections between the storm and the Gaza evacuation, which came right on top of each other.”

Many Judgments Upon America

American history is rife with those who have attributed various calamities to divine retribution. When an earthquake rocked New England in 1727, many deemed it as a divine warning. Indeed, some historians have dated America’s “First Great Awakening” to the 1727 quake.

From its earliest days, America saw the institution of slavery as inviting, even taunting, divine wrath. Wrote Jefferson, a slave owner, in the context of the continued presence of slavery: “God who gave us life gave us liberty.” “And can the liberties of a nation be thought secure when we have removed their only firm basis, a conviction in the minds of the people that these liberties are the gift of God? That they are not to be violated but with his wrath? Indeed I tremble for my country when I reflect that God is just: that his justice cannot sleep forever.”

The Civil War, America’s greatest disaster, has been interpreted as divine judgment upon slavery, America’s greatest sin.In his Second Inaugural address, Abraham Lincoln warned: “Fondly do we hope, fervently do we pray, that this mighty scourge of war may speedily pass away. Yet, if God wills that it continue until all the wealth piled by the bondsman’s two hundred and fifty years of unrequited toil shall be sunk, and until every drop of blood drawn with the lash shall be paid by another drawn with the sword, as was said three thousand years ago, so still it must be said ‘the judgments of the Lord are true and righteous altogether.’”

The Johnstown Flood (1889), World War I, even the Depression (the Southern Baptist Convention said the Depression was “the Providence of God” upon a nation that had forgotten Him) were deemed divine judgments. Whether abortion, homosexuality, socialism, liberalism, racism, integration, the Vietnam War, Jews in the media (or just Jews in general), immorality, wealth inequality, kicking God out of school—whatever the supposed cause, people have not run out of perceived reasons for believing God’s wrath has been and will again be poured out on America.

In one sense, it’s not hard to see why, at least looking at the world through a biblical lens. The concept of divine judgment, that of God’s wrath upon sinful nations and people (Christians call it His “divine indignation”) permeates Scripture.From the biblical account of worldwide flood, poured out upon an evil world—”Then the Lord saw that the wickedness of man was great in the earth, and that every intent of the thoughts of his heart was only evil continually” (Genesis 6:5)—up through the establishment of the Hebrew nation, the reality of God’s judgment upon evil and evil nations cannot be denied.

Many of the warnings were directed toward ancient Israel, the covenant people. That is, having entered into a unique conventual relationship with the Lord, the Hebrew nation was particularly singled out for judgment when the people failed to live up to their covenant obligations, even, at times, openly defying them.It would not be an exaggeration to say that a great deal of the Old Testament writings, particularly the Nevi’im, “the Prophets” (Samuel, Jeremiah, Isaiah, Ezekiel, Amos, etc.), dealt with warnings to the covenant people about divine judgment.

Yet it wasn’t just the Hebrew nation that faced God’s wrath.The Old Testament was filled with warning after warning to the pagan nations around Israel and Judah that, indeed, the day of reckoning was coming. Just one example (of many): The prophet Isaiah, warning ancient Babylon, wrote, “Behold, the day of the Lord comes, cruel, with both wrath and fierce anger, to lay the land desolate; and He will destroy its sinners from it” (Isaiah 13:9).

The New Testament as well warns about impending judgment upon sin and iniquity. Just one example (of many): “When the Lord Jesus is revealed from heaven with His mighty angels, in flaming fire taking vengeance on those who do not know God, and on those who do not obey the gospel of our Lord Jesus Christ. These shall be punished with everlasting destruction from the presence of the Lord and from the glory of His power” (2Thessalonians 1:7-9).

What, then, should God-fearing Christians do in light of such clear testimony from the Word of God?If one of the foundational responsibilities of government is to protect its people from calamity; and if, as the Bible teaches, God will bring calamity and judgment upon evil and immorality—then one doesn’t need to be a logician in order to understand the rationale of those who believe that we need to enforce morality in order to avert divine judgment.

Yet however logical and rational this thinking is, how could it be applied to a nation like America, where separation of church and state all but mandates that theological beliefs, dogma, doctrines—even based on warnings of divine judgment—don’t became the basis of law? It’s hard to imagine a more egregious violation of church-state separation than the enforcement of laws created to curb practices that some, even a majority, even a moral majority, deemed needed to avert God’s wrath.

Then, too, who determines what specific sins will bring this wrath?Some Christians would say that LGBTQ rights is just asking for trouble from above; others that the egregious wealth inequality in America is what God especially abhors. Meanwhile, what about the citizens who don’t believe in God or in His wrath at all?Then, too, how exactly does one determine which disasters are God’s divine punishment or, in some cases, simply the results of living along a geological fault line, or in an area that puts you in the sights of hurricanes?

Despite calamities, and despite the warnings that these calamities are the result of God’s judgments, the United States has not made laws with the specific purpose of averting divine wrath. Not yet, anyway.But, given the human penchant to look for reasons, for a logic, behind the kind of suffering such events bring, it’s very possible—especially if things got really bad and enough people are suffering—for this nation to one day repudiate the principle of church-state separation and enforce, by law, some form of religious or moral “orthodoxy” in hopes of assuaging God’s wrath.

In regards to Jerry Falwell’s response to September 11, Albert Mohler, Jr., then president of the Southern Baptist Theological Seminary, cautioned: “There is no doubt that America has accommodated itself to so many sins that we should always fear God’s judgment and expect that in due time that judgment will come. But we ought to be very careful about pointing to any circumstance or any specific tragedy and say that this thing has happened because this is God’s direct punishment.”

Good words. And the fate of our freedoms, could rest upon how many American listen to them, or to “the sadistic bellowing” of those who, supposedly divining the divine mind, blame our calamities on our corporate sin.

Our world does not lack calamities. The ongoing Covid 19 crisis has some rather eerie parallels to the black death, which devastated much of the world in the Middle Ages. Back then the credulous saw the plague as God’s punishment. We know now of the rat and the flea and the futility of rituals and Inquisition to find a culprit. In the Bible, God does indeed look with disfavor on those who flout His principles; but other than His “strange” act of a final cleansing of the wicked world, the Bible essentially presents a cause-and-effect world in which wrong actions invariably lead to tragedy. There is much that we can do individually to bring our lives into harmony with the tenets of faith. But to project a spiritual panic onto the world of civil governance is misplaced and dangerous. It was with the lessons of history in mind that the patriots who guided the American republic wrote constitutional guidelines to keep the pogrom, the auto-da-fé, and the howl of the witch-burners in their place.—Lincoln Steed, Editor.