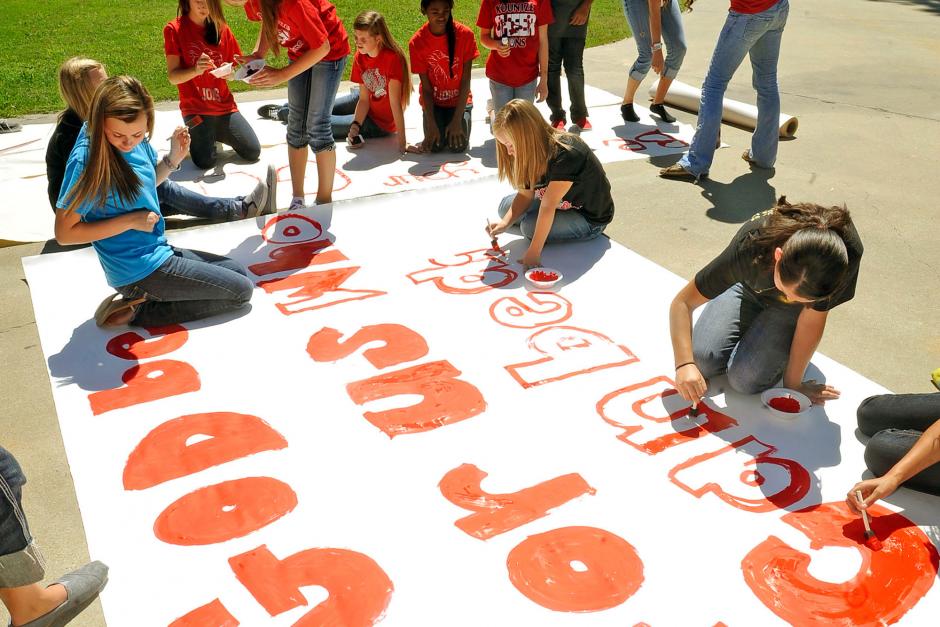 If you asked me to name the greatest rhetoric in American history, several examples would quickly come to mind. I would surely look to the stirring words of the Declaration of Independence: “We hold these truths to be self-evident, that all men are created equal, . . . Or just as likely I would recall the last sentence of President Abraham Lincoln’s second inaugural address: “With malice toward none; with charity for all; with firmness in the right, as God gives us to see the right, let us strive on to finish the work we are in; to bind up the nation's wounds; to care for him who shall have borne the battle, and for his widow, and his orphan—to do all which may achieve and cherish a just and a lasting peace among ourselves, and with all nations.”

Of course, for those of a certain generation, the words of Franklin Roosevelt’s first inaugural address will resonate: “So, first of all, let me assert my firm belief that the only thing we have to fear is fear itself.”

We know that an entire generation was inspired by President John F. Kennedy’s inaugural address call to sacrifice and service with the words “And so, my fellow Americans: ask not what your country can do for you—ask what you can do for your country.”

Those more familiar with the later part of the twentieth century remember President Ronald Reagan’s address to the nation following the space shuttle Challenger disaster, when he closed his speech with the memorable description of the lost astronauts: “We will never forget them, nor the last time we saw them, this morning, as they prepared for their journey and waved goodbye and “slipped the surly bonds of earth" to "touch the face of God."

Lofty and inspirational words all, and they have something else in common. They all are what lawyers call “government speech.” This is a concept you have to go to law school to love. Except for the Declaration of Independence, an actual person delivered these words; yet these were government representatives speaking in an official capacity; thus government speech. The significance of governmental speech versus private speech can play out in any number of ways—as group of high school girls recently found out.

That body of government speech might be said to include the following: banners made by Texas high school cheerleaders for the football team to run through emblazoned with Scripture quotes and references to God. Or not!

These banners do not exactly rise to the level of “we hold these truths to be self-evident” in substance. And absent litigation, they were destined to be “little noted, nor long remembered,” as Abraham Lincoln once so movingly noted of real heroes; the banners were after all designed and created by teenage girls to be destroyed by teenage boys moments after their unfurling. But speech does not have to rival “We the People . . .” in either pithiness or style to be governmental speech.

After getting a letter from an advocacy group, district superintendent Kevin Weldon was concerned enough about the banners to consult a lawyer. The lawyer apparently advised him this practice could be viewed as violating the establishment clause of the First Amendment, and so the cheerleaders were told to stop.

The lawyer and the superintendent had good reason to be cautious. In Texas, football and religion have a long and litigious history. In 2000 the Supreme Court ruled in Santa Fe Independent School District v. Doe (530 U.S. 290) that student-led prayer before a football game was unconstitutional. Further, in 2010 the federal appellate court over Texas ruled in a case brought by a cheerleader who was kicked off the cheerleading squad for not cheering that she was the “mouthpiece” of the school district.

The key question in almost all of the school establishment clause cases is Who is speaking? Is the government speaking through the student, or is just the student speaking? It is a distinction that lawyers love to make. Normal people simply see a person talking and assume he or she is the speaker. Lawyers love to talk in terms of personal speech, governmental speech, corporate speech, you name it, lawyers like to categorize it.

There is good reason for this. The First Amendment places restrictions on the government that it doesn’t place on private speakers. We would be appalled at the idea that a church could not decide who would occupy their pulpit based on their theological views. Yet we would be equally shocked if government put a similar restriction on its pubic forums.

Schools are a tricky place for the First Amendment. Ever since the 1969 case of Tinker v. Des Moines, Independent Community School District (393 U.S. 503) students have had some First Amendment rights in school. Yet, courts have never been comfortable giving them the same rights it does adults in the “free” world. Make an obscene gesture as the president’s motorcade drives by, and you will be lucky to get a second look from the Secret Service. Do that to the school principal walking by in the hallway, and you will likely encounter a different reaction, and the courts are unlikely to intervene.

Schools are used to regulating (or at least attempting to regulate) almost every facet of what students say or do. In much the same way as the military defends democracy but doesn’t practice it, schools teach about freedom of expression but don’t allow it. Schools have even been allowed to suspend students simply because they did not like the content of a student’s speech. This “viewpoint discrimination” is otherwise unheard of in First Amendment cases.

With this background and precedent it is easy to see how virtually any speech made at a school-sanctioned event (such as a football game) could be viewed as government and not private speech. The school does not turn over its PA system to just anyone to speak, and it does not direct its football team to crash through the banner of any group of students who show up.

The cheerleaders argued that they created the banners on their own time, with their own materials, and that they alone determined the content. Which is to say that the school did not tell them what to put on the banners, and therefore it was not the school speaking. In other words, the banners are no more governmental speech than if the cheerleaders had created a Justin Bieber poster after school (or whatever high school girls do with their time when not conspiring to violate the establishment clause.)

Of course, even assuming it was the girls’ idea, there can be little doubt that had the banners contained a message the school did not approve of—say, one supporting the opposing team—it would have quickly stopped that particular message. Or if instead of putting up Christian Bible texts, the girls had decided to mix it up and put quotes from the Quran on the banners, the school might have also sought to stop that practice on any number of grounds, including not offending Muslims.

But just because government can prohibit some speech does not mean all speech is government speech. While making the wrong gesture at the president’s motorcade might not draw scrutiny, a sign advocating their soon and untimely death most certainly will. Yet no one argues that all of the law-abiding protestors are actually government agents just because the government exercises some veto over the their speech.

Which of course leads us back to whether the Texas cheerleaders’ speech is closer to that of Dwight Eisenhower warning of a “military-industrial complex” as he left office (government speech) or Martin Luther King, Jr., declaring “I have a dream” (copyrighted private speech).

A Texas state court judge in October of 2012 said it was the latter and allowed the cheerleaders to continue. Football season is over, and whether this case will go further has yet to be seen. At one point, counsel for the school district indicated it had no desire to appeal the decision.

You can feel some sympathy for the school superintendent. He has publicly claimed to be a Christian in his personal life and was only trying to follow the law when he told the girls to change their banners. Why he thought stepping into the intersection of school, free speech, and religion was a good idea is probably a question he has asked himself more than once since making national headlines.

This area should not be the minefield that it has become, but the courts and schools have conspired, however inadvertently, to make it so. Schools have a hard time recognizing the rights of students, and courts have done a poor job setting clear guidelines and creating standards that don’t have lawyers disagreeing on the meaning of.

Schools have not helped this matter with their lack of respect for student First Amendment rights. At almost every turn schools advocate for more bureaucratic control and less—not more—free speech. There seems to be something bred into the DNA of primary and secondary school administrators that compels them to prohibit and punish speech they don’t like.

The courts have been of little help. They recognize that schools and the population they serve require a level of supervision that we would not tolerate in the rest of society; not unlike what we see in prisons. Put on top of that the absolute mess that is the Supreme Court’s establishment clause jurisprudence, and you have a recipe for confusion, inconsistency, and litigation.

Issues like this are of great symbolic but often little substantive importance to parties on all sides. Not being able to write Bible verses on a high school football banner hardly counts as being thrown into the lions’ den. Similarly, even the most ardent atheist would be hard pressed to claim any real injury from being momentarily subjected to the scribbling of a group of teenage girls on colored paper of quotes from one of the most widely read and quoted books in world.

This of course doesn’t mean the issue isn’t important. We fight at the margins so we don’t fight where it counts. Maybe these banners are OK at a football game, but the school certainly can’t put a banner over the entranceway saying “This is a Christian school for Christians.”

Perhaps the school can, or is even required to, prohibit the cheerleaders festooning their banners with Bible quotes, but it certainly cannot prohibit them from going to church the next day or expressing their religious views over lunch in the cafeteria.

By muddling, and allowing to stay muddled, this important area of the law the Supreme Court is leaving the country vulnerable to fights over where establishment clause and free exercise clause disputes matter. Given the stakes, we deserve to have clear guidance, and the Supreme Court needs to do its job in this area.