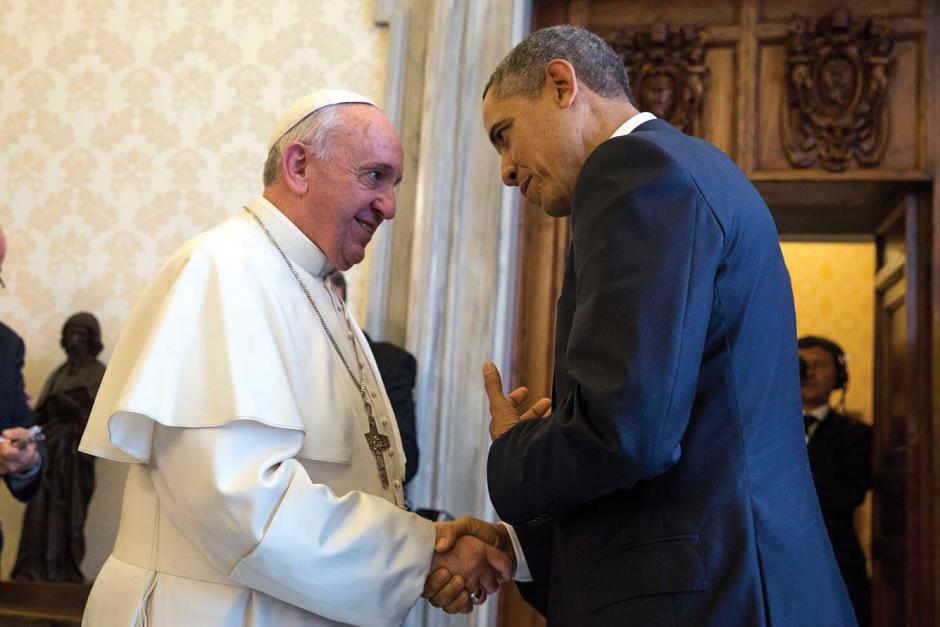 The pageantry and passion will long be remembered.

The adoring crowds, the cheering children, the red carpets, the superlatives of welcome from heads of state, the gushing media accolades, the inspiring words transcending differences. Pope Francis is the fourth Roman pontiff to visit the United States, but without question—in the present age of 24-hour news, the World Wide Web, and pervasive social media—his 2015 American journey was the most eventful, thus far, for any supreme leader of the Roman Catholic Church.

But for those who value substance over style, in particular regarding religious freedom, it is time for careful and sober analysis.

The profusion of praise for the pontiff began even before he set foot in America. One source of such praise is especially noteworthy, for historical as well as theological reasons. Just prior to the papal visit, Christianity Today—still perhaps the most prominent journal among evangelical, professedly Protestant Christians—flaunted a headline which read, “From Antichrist to Brother in Christ,” noting dramatically favorable changes in how Protestant ministers now view the pope and the church he leads.1

It was the Protestant Reformers, a half millennium and more ago, who were most prominent in identifying the Roman Papacy as the antichrist of Bible prophecy. In large measure this was a result of the claim by the pope and his priests to be able to forgive human sin and to prescribe prerequisites for the reception of divine forgiveness. The word “anti” in New Testament Greek carries more the meaning of “in place of” than simply “against”—the latter, of course, being its meaning in today’s English. Because of the Roman Church’s claim to a mediatorial role between God and humanity that the Bible ascribes solely to Jesus Christ (1 Timothy 2:5), the Reformers—and their heirs for most of the centuries to follow—held that the Papacy merited the label of antichrist.

During the past several decades Pope Francis and his predecessors have consistently maintained their alleged right to forgive sins and to create their own conditions—apart from Scripture—whereby sinners may receive pardon. In December of 1984 a headline appeared in the Los Angeles Times that read, “No Forgiveness ‘Directly From God,’ Pope Says”:

“Rebutting a belief widely shared by Protestants and a growing number of Roman Catholics, Pope John Paul II on Tuesday dismissed the ‘widespread idea that one can obtain forgiveness directly from God,’ and exhorted Catholics to confess more often to their priests.” 2

Pope Francis has likewise made clear that he and his priests have the authority both to forgive sins and to ascertain the sincerity of those seeking absolution. In anticipation of the upcoming Holy Year of Mercy, the current pope has given permission to priests, rather than simply to bishops, to absolve women who have had abortions:

“The pontiff said he will allow priests ‘discretion to absolve of the sin of abortion those who have procured it and who, with contrite heart, seek forgiveness for it’ during the special year, beginning December 8.”3

Obviously no human cleric has any access to the secret motives of parishioners, as the Bible declares, speaking of God: “Thou, even thou only, knowest the hearts of all the children of men” (1 Kings 8:39). The claim of Roman Catholicism to be able to forgive sins is just as clear now as in the days of the Reformation and in the centuries that have since elapsed.

Even the sale of indulgences, against which Martin Luther protested so strongly, has continued under the previous two popes, and under Francis as well. As the turn of the millennium approached, the late John Paul II made much of the availability of indulgences. In 1998 a front-page headline in the San Diego Union-Tribune reported: “Pope John Paul II announced yesterday that throughout the millennium celebration, penitents who do a charitable deed or give up cigarettes or alcohol for a day can earn an ‘indulgence’ that will eliminate time in purgatory.” 4

The following year the Vatican released a new manual on how these indulgences might be obtained.5 Ten years later, under Benedict XVI, the church again took pains to promote this practice:

“In recent months, dioceses around the world have been offering Catholics a spiritual benefit that fell out of favor decades ago—the indulgence, a sort of amnesty from punishment in the afterlife—and reminding them of the church’s clout in mitigating the wages of sin.

“The fact that many Catholics under 50 have never sought one, and never heard of indulgences except in high school European history (Martin Luther denounced the selling of them in 1517 while igniting the Protestant Reformation), simply makes their reintroduction more urgent among church leaders bent on restoring fading traditions of penance in what they see as a self-satisfied world.”6

And Francis agrees: “Tech-savvy Catholics will spend less time in purgatory—or so says Pope Francis. The Pontiff has decreed that people who follow the events of World Youth Day in Rio de Janeiro via the Vatican’s Twitter feed can get indulgences, which Catholics believe reduce time spent atoning for sins in the afterlife.” 7

It would seem that no matter how loving, merciful, and open to diversity the current pope portrays himself to be, the heresies against which the original Protestants bore witness are still alive and well under his pontificate. On what basis, then—other than outward trappings—do the professed heirs of the Reformation presume to absolve the Papacy?

The freedom to practice one’s chosen faith was a recurring theme in the message Pope Francis bore to America. Yet one of the pope’s initial acts in the United States was a ceremony canonizing the Franciscan monk Junipero Serra, founder of the original Spanish missions in California. Yet the conduct of this papal inquisitor hardly qualifies as saintly, and not in the least respectful of religious liberty. Under Serra’s rule, Native Americans were beaten, forced into unwilling marriages, coerced into accepting Christianity, and enslaved by the thousands.8 One book on Serra’s history and its consequences has been titled The Missions of California: A Legacy of Genocide. 9

On one hand, the current pope has condemned the cruelty of the colonial overlords in the New World and elsewhere, yet on the other hand, he makes a notable figure of this very brutality into a saint. Little wonder that Native American groups found “hollow” the pontiff’s effort to apologize for the horrific wrongs committed by New World, Catholic colonists. 10

On his flight back to Rome following his U.S. visit, Pope Francis defended the actions of Kentucky county clerk Kim Davis, claiming such public officials have the right to refuse to issue marriage licenses to gay couples.11 Yet careful scrutiny of this case underscores the fact that Davis’ conduct is less an exercise of individual religious freedom than an exercise of civil force in the name of her religious beliefs. Ms. Davis does not work for a church or ministry that opposes gay marriage on biblical or similar grounds. Rather, she works for a nontheocratic government that is obligated to serve everyone, including those whose religious and private moral convictions differ from hers. For the pope to support Ms. Davis’ actions is thus not a concession to religious liberty, but is rather consistent with the church’s centuries-old efforts to employ civil power as the enforcer of its teachings.

Little if any difference can be found between the current pope’s comments on the Davis case and the threats of American Catholic leaders in recent years to excommunicate prominent political leaders who differ with the church’s political approach to the abortion question. The late New York governor Mario Cuomo faced such threats during the 1990s,12 as did Senator (now secretary of state) John Kerry during his 2004 presidential campaign.13 It helps to keep in mind that the issue in both of the above cases was not noncompliance with church dogma, as both the late governor and the current secretary of state have affirmed very clearly their moral agreement with the church’s teachings on this subject. Where they differ with the church is in their refusal to enforce church dogma through civil law. (Vice President Joe Biden, also a devout Catholic, has recently made public a similar distinction in his own mind between adherence on his part to the Catholic doctrine that life begins at conception, while refusing to impose this teaching on others. 14 Thus the threat of excommunication, though not carried out, concerned, in the above cases, not the personal acceptance of the church’s teachings, but rather the issue of forcing those teachings on others through the power of the state.

In sum, beyond the pageantry and benign trappings of the recent papal visit, the fact persists that the Catholic Church hasn’t at all changed the substance of its beliefs. Thoughtful commentators have noted that for all the present focus on social justice, care for the environment, and following the teachings of Jesus to minister to the poor, the church’s teachings on all key issues remain the same.15 Francis has certainly given the Catholic Church a benign and humble face, one that most see as refreshing in contrast both to current political and cultural polarization and to the insular defensiveness so evident in the church’s approach to recent scandals within its clerical ranks. But in the final analysis, Rome is still Rome—in its view of forgiveness and salvation, in its view of incendiary moral issues, and most important of all, perhaps (for the purpose of this article), in its view of the relation of church and state. Pope Francis truly conveys the image of a humble, gracious, compassionate leader. What is in his heart, only God can know (1 Kings 8:39). But the institution he leads, and the teachings against which godly dissidents across the centuries have raised objection—often at the cost of their lives—remain essentially unchanged.