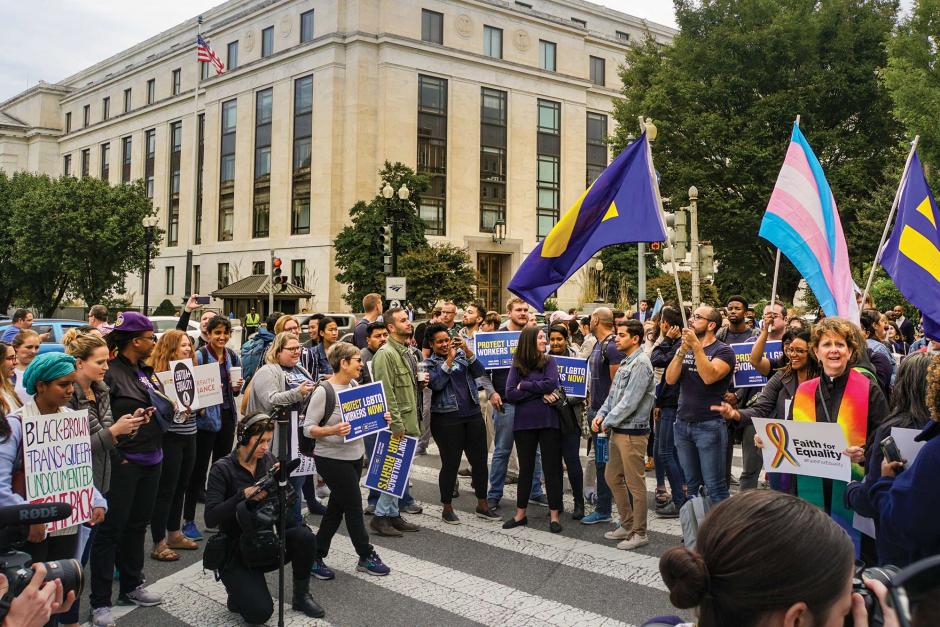 Dignity, Respect, and Protection from Discrimination

Public opinion in America around LGBT civil rights has undergone something of a revolution over the past decade. It’s a shift that has been driven in large part by heightened awareness of the legal vulnerabilities faced by gay, lesbian, bisexual, and transgender (LGBT) Americans. According to recent polling data, 83 percent of Americans agreed with President Joseph Biden’s January 2021 executive order prohibiting workplace discrimination based on sexual orientation and gender identity.1 Currently 21 U.S. states and several large cities ban such discrimination; however, the majority of LGBT Americans still lack clear recourse when they are evicted or refused service because of their sexual orientation or gender identity (SOGI).

“Enforcing basic civil rights for everyone should not be controversial,” maintains Stanley Carlson-Thies, founder and senior director of the Institutional Religious Freedom Alliance. “Government has a responsibility to ensure protection from unjust treatment to all, including LGBT persons.”2

Last summer’s Supreme Court ruling in Bostock v. Clayton County provided a major victory for LGBT rights advocates. The Court ruled 6-3 that the 1964 Civil Rights Act protects gay, lesbian, and transgender employees from discrimination based on sex. In his majority opinion Justice Neil Gorsuch wrote, “Today we must decide whether an employer can fire someone simply for being homosexual or transgender. The answer is clear.”3

In February of this year the U.S. House of Representatives sought to build on the SOGI protections affirmed in Bostock by once again passing the Equality Act,4 a LGBT civil rights bill President Biden has often referred to as one of his top legislative priorities.5 If enacted, the Equality Act would amend existing civil rights laws, including the Civil Rights Act of 1964 and the Fair Housing Act, to explicitly ban LGBT discrimination in areas such as employment, housing, credit, education, public spaces and services, federally funded programs, and jury service. The legislation faces an uphill battle in the Senate, where key lawmakers have voiced concern over its absence of religious liberty protections.6

Problems With the Equality Act

Proponents of the Equality Act claim the legislation maintains our nation’s historic religious freedom protections.7 In reality, the bill as drafted includes a number of areas troubling to religious freedom advocates.

In its statement responding to the House’s passage of the Equality Act, the National Association of Evangelicals identified some of those concerns. “Religious charities and institutions that believe marriage is a covenant relationship between a man and a woman play indispensable roles in our social safety net—feeding the hungry, housing the homeless, healing the sick and educating disadvantaged children—as well as other valuable contributions to the well-being of all Americans. The version of the Equality Act passed by the House of Representatives would pressure institutions to change their religious beliefs or withdraw from the public-private partnerships that make our charitable sector so dynamic.”

In its current form, the Equality Act would:

When challenged on these specific threats to religious freedom, Equality Act supporters have recommended the courts as the clarifying venue.8 But prior civil rights legislation has purposefully navigated the balancing of competing rights in order to clearly define protections and avoid lengthy and costly legal battles.

According to Todd McFarland, General Conference of Seventh-day Adventists associate counsel and Liberty legal advisor, the task of respecting and protecting the First Amendment is not just the job of the courts, but also of Congress. “Members are not doing their job by passing laws they know infringe on the rights of people of faith and force the judicial system to fix their errors,” he says.

Tim Schultz, president of the First Amend­ment Partnership, a leading religious freedom advocacy organization, agrees. “Clear protections written in statutes are always the gold standard of protections for religious freedom,” he says. “They prevent expensive and uncertain litigation with their clarity, and they represent a democratic consensus that is difficult to go back on.”

The Equality Act’s stripping away of religious protections is both unnecessary and contradictory. LGBT nondiscrimination protections can be paired with historically respected religious freedoms to maximize freedom for all. Faith-based humanitarian aid and community service institutions that provide essential services to all Americans need not be shuttered in order to enhance basic LGBT protections.

There’s no doubt the uncharitable tone often taken by people of faith toward the LGBT community has been enormously damaging to relations between these groups. At the same time, critics of religious protections have unfairly rebranded once-cherished religious liberty as the “right to discriminate.” Neither attitude has been beneficial to the critical issues at stake.  Both parties would benefit from working together to resolve the continuing conflict between religious freedom and LGBT rights.

As Council of Christian Colleges and Universities president Shirley Hoogstra said, “The Equality Act, as currently drafted, fails to do justice to the rich complexity of moral traditions that are central to the multifaith and pluralistic world of twenty-first-century America, and also fails to do justice to core ideals of America itself, including a deep respect for differences and the role of religious freedom as a primary driving force in the founding of our nation.”

Members of a diverse coalition of faith traditions (including the Seventh-day Adventist Church, which publishes Liberty), religious freedom advocacy groups, and LGBT organizations believe there is a way to protect everyone’s dignity in public spaces. Known as the Fairness for All Act (FFA),9 this legislation is grounded in two core beliefs:

No American should lose their home or livelihood simply for being lesbian, gay, bisexual, or transgender.

Religious persons should not be forced to live, work, or serve their community in ways that violate their sincerely held beliefs.

Fairness for All was reintroduced into Congress earlier this year with both heightened interest and increased congressional support. In introducing the bill, lead sponsor Representative Chris Stewart (UT-02) spoke of the need for a harmonizing piece of legislation. “It is hard to really love our neighbors when we are fighting with them over whose rights are more important,” he said. “The country can accommodate both civil liberties for LGBT individuals and religious freedom.”

The Fairness for All approach balances religious freedom and LGBT rights by amending the Civil Rights Act, protecting religious freedom in the workplace, protecting the rights of LGBT individuals, and preserving First Amendment rights. State-level SOGI nondiscrimination legislation has proved this balanced approach is not only possible but effective. California, New York, and Utah LGBT civil rights laws all include religious exemptions and have rarely been challenged.

“Leading up to the passage of this legislation in Utah, we were concerned about religious freedom in the middle of a culture war and a winner-takes-all approach of those engaged,” shared Church of Jesus Christ of Latter-day Saints spokesperson Doug Andersen. “We think protections for both religious liberties and LGBT rights can be reached without either side having to compromise its values. At the national level, we hope Congress will enact balanced legislation benefitting both individuals and communities of faith.”

Tyler Deaton, senior advisor for the American Unity Fund, urges lawmakers to act. “The 117th Congress represents the best opportunity we’ve ever had to expand both religious freedom and LGBTQ civil rights if we all come together to protect one another.”

By our working together and rejecting polarizing rhetoric, it’s possible to find a just, practical, and durable solution to this ongoing challenge; a solution that honors our nation’s commitment to religious freedom and that upholds every person’s right to dignity, respect, and protection from discrimination. It’s up to lawmakers to take advantage of the opportunity.

5 The White House, “Statement by President Joseph R. Biden, Jr., on the Introduction of the Equality Act in Congress,” February 19, 2021, https://www.whitehouse.gov/briefing-room/statements-releases/2021/02/19/statement-by-president-joseph-r-biden-jr-on-the-introduction-of-the-equality-act-in-congress/.