Bishop to Knight?—Checkmate or Camelot? 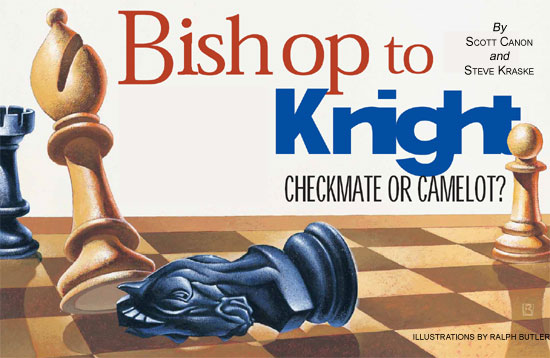 Eugene Kennedy recalls the New York parish of his childhood, a place where men well-known as gangland bosses walked the streets. Not once, said the man who would grow up to become a priest and confidant to the late Cardinal Joseph Bernardin of Chicago, does he remember his church denying those murderous thugs Communion. So he's aghast to hear talk from bishops—a small but bold minority—that lawmakers such as presidential candidate John Kerry should be refused the Eucharist.

At least four Catholic bishops, including Archbishop Raymond Burke of St. Louis, have said that the staunchly pro-choice Democratic candidate for president, a practicing Catholic, should not take Holy Communion in their dioceses. Among their concerns are Kerry's stands on abortion, stem cell research, euthanasia, and gay marriage—all of which, they say, run contrary to church teachings.

One bishop has gone further. Bishop Michael Sheridan of Colorado Springs, Colorado, has said that Catholics who even vote for a pro-choice politician should remain seated during Communion.

"For many Americans, this crosses a line," said Karlyn Bowman, who studies public opinion at the conservative American Enterprise Institute. "They don't think the church should be involved."

When John F. Kennedy got near a lease on the White House, some voters fretted that the country's first-ever Catholic president would be more beholden to his church. This time a handful of Catholic clergy have pitted private loyalty to church against political philosophy and public policy.

Senator Kerry, who regards his faith as private, told reporters that he will not be pressured by religious leaders. And in fact, other clergy question the propriety of using a sacrament as a political sanction.

How the nation's 64 million Catholics see the controversy could be a factor in a tight presidential race. As a group, Catholics once tended to vote Democratic, but the partisan divide within the faith has narrowed significantly compared with 30 years ago.

In 2000, Catholics voted for Al Gore over George W. Bush by 50 percent to 47 percent. In Missouri, though, a key battleground state in presidential elections, Catholics sided with Bush over Gore 55 percent to 44 percent, according to an ABC News exit poll.
Demonstrators have staged vigils across the country, including in Denver, where 250 U.S. bishops and several cardinals met. The bishops concluded that politicians who regularly back abortion rights or euthanasia are "cooperating in evil," but left to individual bishops whether lawmakers should be denied Holy Communion as a result.

Yet the bishops also seemed to caution against the tactic.

"The polarizing tendencies of election-year politics can lead to circumstances in which Catholic teaching and sacramental practice can be misused for political ends," the bishops said in a statement.

The remaining possibility, however, that a bishop can deny Communion based on political positions leaves open a chance not that government will intrude on political freedom, but that clergy will impose their powers over those in government.
And that's sparked deeply committed anti-abortion forces, for instance, to use the church as a way to pressure candidates on the issue and embarrass those they oppose. In Kansas City protesters recently pleaded for Bishop Raymond J. Boland of the Diocese of Kansas City-St. Joseph to join with four other bishops in withholding Communion from Kerry should he ever request it in the Kansas City area.

"You can't be pro-abortion and Catholic at the same time. That is an oxymoron," said Tom Gugger, a 48-year-old Blue Springs, Missouri, grain trader.

The Kansas City bishop has said that he thinks bishops generally want to keep apart the politics of their laity and practice of faith.

"The vast majority . . . are not in favor of bringing their problems right up to the Communion rail," Bishop Boland said.
Kerry is not the first Catholic candidate for president under pressure because of his faith. John F. Kennedy faced suspicions in his 1960 campaign for president over how much he would be influenced by the pope.

No one is advocating excommunication for Kerry. Still, the Perez case stands out because it is virtually the only instance scholars can offer of a bishop employing the power of the church to punish someone for public policy.

"It is unheard of," said Jason Berry, a Catholic who has written critically of the church, most recently in a book, Vows of Silence. "There are many positions that the church takes relative to human life—the death penalty, abortion, and, in the run-up to the war in Iraq, the pope let it be known very clearly he was opposed."

But to fuse choices on public policy to a politician's treatment in Massachusetts, Berry said, crosses into a new realm. Given the church's shielding of priests in child sex abuse cases, Berry said, "the bishops are not in the position to cast the first stone."

Bishop Sheridan, though, was undeterred. In a pastoral letter in May, he wrote: "The Church never directs citizens to vote for any specific candidate. The Church does, however, have the right and the obligation to teach clearly and fully the objective truth about the dignity and rights of the human person."

Critics say that the bishops who would deny Communion to individuals based on abortion politics conveniently seize issues that put Kerry at odds with the church, while overlooking things such as support for the death penalty or support for the invasion of Iraq.

Bishop Sheridan's assistant, Peter Howard, said that the issues the bishop chose covered an "intrinsically evil nature." And he cited Catholic Church Canon 915, which says that people "who obstinately persist in manifest grave sin are not to be admitted to Holy Communion."

In that context, scholar George Weigel said, clergy have cause to withhold the sacrament.

"More and more bishops are coming to the conclusion that . . . support for abortion on demand is, in some sense, participating in that grave sin," said Weigel, a senior fellow at the Ethics and Public Policy Center.

But the Catholic pressure differs from the Protestant pressure, because the ability to take Communion figures as a measure of a person's standing with the church.

"With Protestants, we don't have anything commensurate to discipline our members, because we have a different view of the Eucharist," said Molly Marshall, a professor of theology at the Central Baptist Theological Seminary in Kansas City, Kansas.
Many people note that the Catholic Church has been involved in public policy throughout its history. Yet some balk at exploitation of a politician's personal religious standing to influence life in the public arena.

"They're trying to make a political statement in regard to the campaign," said Maureen Fiedler, a nun and board member of the liberal reform group Catholics Speak Out.

She said the denial of Communion would overlook the church's concept of "primacy of conscience." That tells Catholics to follow the teachings of Jesus and the church, but that ultimately they must follow their own conscience.

Early polling on the issue—one certain to overwhelm front pages if a priest turns Kerry away from Communion—hints that Catholics do not want their priests bringing the election into their sanctuaries.

Three fourths of Catholics in a Time/CNN poll published in June opposed the denial of Communion to a candidate for his political beliefs.

So analysts see more in common between devout Catholics and active Evangelicals
than between practicing and nonpracticing Catholics.

If anything, political handicappers see the issue as unlikely to move public opinion. Voters strongly opposed to abortion are unlikely Kerry backers. Voters supporting abortion rights are likely to be offended by a politically active church.

"The great majority of Catholic laity would react very negatively against any such action," said Richard McBrien, a theology professor at University of Notre Dame.

Margaret O'Brien Steinfels, a former editor of the liberal Catholic magazine Commonweal, said priests or bishops seen to be using Communion as a political bludgeon could trigger a backlash. Their influence is waning after the church's sex abuse scandal.
"The bishops," she said, "have picked the wrong time to do this sort of enforcement of Catholic teaching."