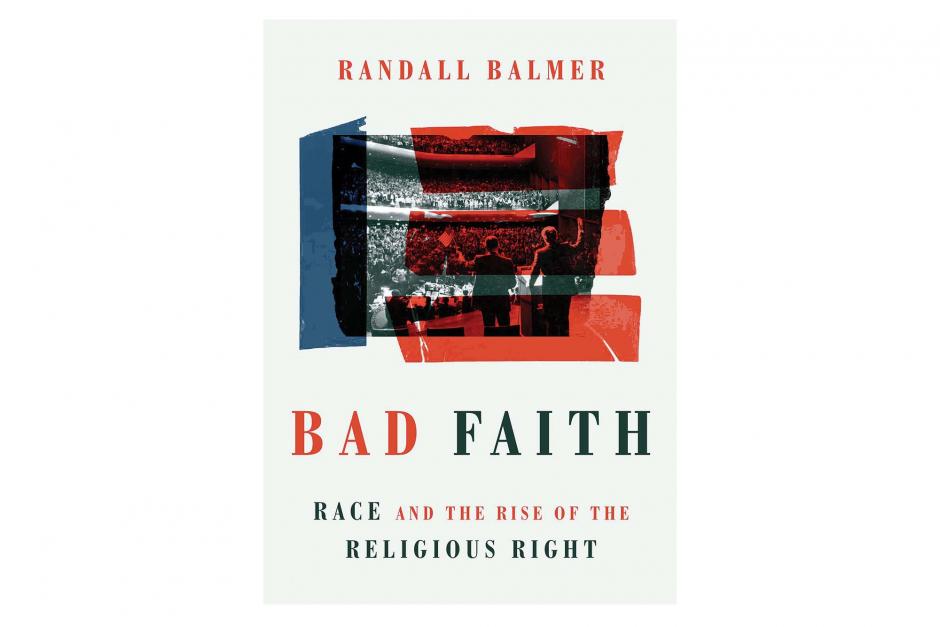 Book Review - Bad Faith: Race and the Rise of the Religious Right, by Randall Balmer.

Bad Faith: Race and the Rise of the Religious Right succinctly tells a story that has rarely, if ever, been told. In a small, readable account of some 88 pages, historian Randall Balmer takes on two important tasks. First, he shatters the myth that opposition to abortion was the engine that drove the 1970s political explosion known as the religious right. And second, he tells the true story of the role that race played in the rise of the religious right.

Bad Faith begins, however, by placing the evangelicalism of the 1970s in historical and theological context. Historically, evangelicalism retreated from engagement with American culture following the Scopes “Monkey Trial” of 1925. It constructed its own subculture of institutions—churches, schools, colleges, and publishing houses—and these institutions provided the building blocks for what would later become a reinvigorated political engagement. Theologically, Bad Faith explains simply how the postmillennialism of the nineteenth century (which focused on social reform to bring about a thousand-year reign of peace, only after which Jesus would return) was followed by a turn toward premillennialism, the belief that Jesus would return before the millennium. Premillennialism was largely fatalistic about influencing politics and culture or solving social problems. Instead, it turned its attention to the salvation of individuals. By the 1970s, evangelicals had largely forgotten the social reform energy spawned by the Second Great Awakening of the 1830s and 1840s, championed by the likes of evangelist Charles Finney. Social reform had become the project of liberal churches.

Today the religious right’s founding myth—that the evangelical reengagement in politics was a response to the Supreme Court’s 1973 Roe v. Wade decision legalizing abortion—is widely established. For this reason it is easy to overlook the contemporary Protestant response to Roe v. Wade. So Bad Faith begins by examining the historical record. A 1968 conference convened by Christianity Today along with the Christian Medical Society examined the subject of abortion and issued an inconclusive statement. It acknowledged the complexity of the issue and admitted they could not agree whether abortion was a sin. The statement cited “individual health, family welfare and social responsibility” as possible justifications for abortion. In 1970 the United Methodist Church General Conference called on state legislatures to repeal laws restricting abortion, balancing this in 1972 with a statement upholding “the sanctity of unborn human life.” The Southern Baptist Convention in 1971 passed a resolution calling on Southern Baptists to “work for legislation that will allow the possibility of abortion under such conditions as rape, incest, clear evidence of fetal deformity, and carefully ascertained evidence of the likelihood of damage to the emotional, mental, and physical health of the mother.” This statement was reaffirmed in 1974 and 1976. Bad Faith presents additional evidence that the overwhelming response of evangelical Protestants to Roe v. Wade was “silence.” Evangelicals considered abortion a Catholic issue.

Bad Faith also tells the backstory to the author’s own interest in this subject. In 1990 Balmer, himself a prominent evangelical scholar teaching at Columbia University, was attending a small gathering of religious right notables and heard Paul Weyrich deride the notion that abortion was the driving force in bringing Protestants to the political table with Roman Catholics. Weyrich was himself an architect of the movement, a prominent conservative activist and founder of the conservative think tank, the Heritage Foundation. Unsure he had understood Weyrich correctly, Balmer engaged him privately and confirmed what Weyrich had said.

Balmer’s subsequent research led him to uncover the story that unfolds in Bad Faith, a narrative he documented two decades ago but did not tell until now. When I interviewed Balmer recently for my weekly radio show, Freedom’s Ring, I asked him why he waited until now to recount this history. I surmised it had something to do with the coarsening of the culture on issues of race in recent years, and the response as embodied in the Black Lives Matter movement. Balmer did not disagree.

Balmer tells the “real story” of the rise of the religious right without rancor or criticism, as a simple historical narrative. In May 1969 a group of African American parents in Holmes County, Mississippi, sued the secretary of the Treasury and the Internal Revenue Service, seeking an injunction to prevent three new “whites only” Christian academies from obtaining tax-exempt status. They argued the schools’ discriminatory policies prevented them from being considered “charitable” under the law. Following the Supreme Court’s 1954 decision desegregating public schools, White enrollment in Holmes County’s public schools dropped from 771 to 28 the first year, and to zero the second.

The Court granted the injunction removing the tax-exempt status of the schools, following which President Richard Nixon directed the IRS to develop new rules denying tax-exempt status to segregated private schools. Its 1971 ruling stated: “Under the Internal Revenue Code, properly construed, racially discrim­inatory private schools are not entitled to the Federal tax exemption provided for charitable, educational institutions, and persons making gifts to such schools are not entitled to the deductions provided in case of gifts to charitable, educational institutions.”1

According to Balmer, Paul Weyrich “saw his opening.” Weyrich postulated a new conservative politics “defined … in moral terms, packaged in non-religious language, and propagated throughout the country by our new coalition.” He repeatedly described this as a “moral majority.” “When political power is achieved,” he claimed, “the moral majority will have the opportunity to re-create this great nation.” Balmer discreetly refuses to draw the obvious connection between Weyrich’s political ideas and the rhetoric of Donald Trump.

In 1976 the IRS revoked the tax-exempt status of Bob Jones University, a funda­mentalist Christian college in South Carolina, on account of its racially discriminatory admissions policies. The university’s challenge to the loss of its tax-exempt status led to a stunning loss at the Supreme Court in 1983. It was an 8-1 decision.

Balmer cites several key conservative activists who were participants in creating the religious right, all of whom freely admit that abortion was not the motivating issue. When “the Internal Revenue Service tried to deny tax exemption to private schools,” Paul Weyrich was quoted in a magazine interview that “more than any single act brought evangelicals into the political process.” As Balmer tells it, “evangelicals portrayed themselves as defending the sanctity of evangelical subculture from outside interference.”

In sum, conservative leaders knew they could not motivate a grassroots movement based on defending the racially discrim­inatory practices of religious schools, and so opposition to abortion became a convenient organizing tool. In this, evangelical Protest­ants were co-opted by Roman Catholic theology in at least two particulars. First, increasingly over time, evangelicals have abandoned their prior nuanced moral per­spectives on abortion for a more abso­lutist Catholic standard—a standard founded on beliefs around the timing of when the immortal soul enters the embryo in the womb.

But the Bob Jones University case also reflects an absolutist Roman Catholic view of the autonomy of religious institutions—that they are entitled to remain entirely free of government regulation. A series of subsequent federal and Supreme Court cases reminded religious institutions that they were, indeed, subject to regulations such as minimum wage and hour laws, equal pay provisions, and the like.2

Although today’s conservative-leaning Supreme Court has backed away from the vigorous application of the establishment clause’s principle of separation of church and state, it has ruled in favor of religious autonomy in recent cases involving government restrictions on church services because of the COVID-19 pandemic. It has also affirmed this autonomy by extending the First Amendment’s “ministerial exception” to broadly protect the rights of religious institutions in hiring decisions, even of elementary school teachers. While race is no longer central to the legal conflicts between government and religious institutions, the application of nondiscrimination laws with respect to sexual orientation and gender identity remains a volatile issue.

Meanwhile, Americans have largely forgotten that the religious right’s origin story is mired in morally repugnant racist policies. The focus remains on abortion and the question of whether the Supreme Court will finally reverse Roe v. Wade, as it has been invited to do in pending cases.

Balmer’s slim volume expresses no personal judgments or criticisms of religious right politics—he voiced those concerns years ago in his 2006 book Thy Kingdom Come: How the Religious Right Distorts the Faith and Threatens America. Instead, Bad Faith stands as a simple warning to those who seek power in Jesus’ name:  Be exceedingly careful not to compromise moral integrity in pursuit of power. For as Jesus said long ago: “For what will it profit a man if he gains the whole world, and loses his own soul?”  Surely Jesus’ wisdom applies to movements as well as to individuals.