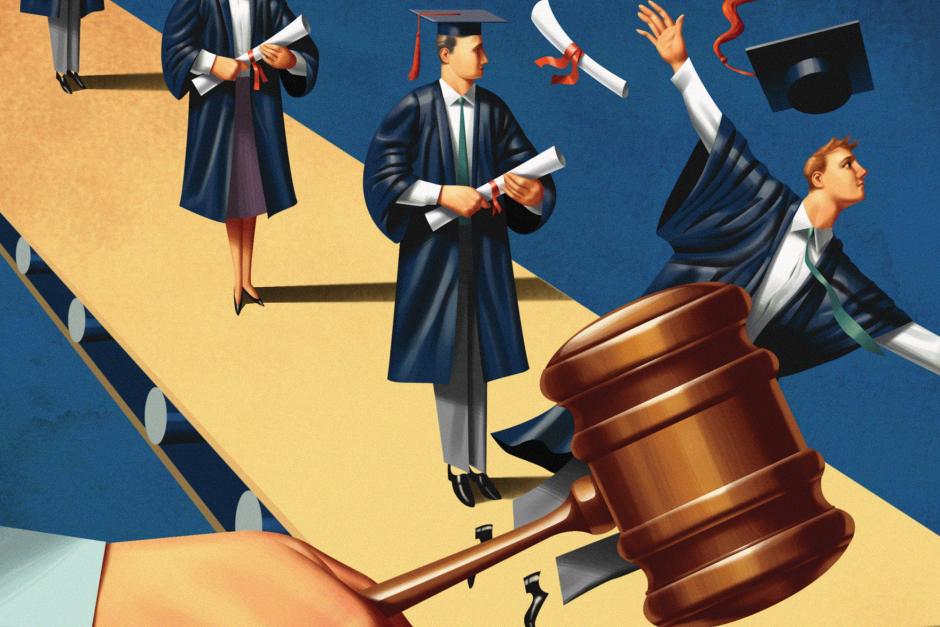 A law school seemed like the “natural next step”1 in the evolution of programs offered at Trinity Western University (TWU), a private Christian university in Langley, British Columbia, Canada aims to be a tolerant, multicultural society that celebrates diversity. A Christian law school could serve to broaden and enrich Canada’s diversity. However, this turned out not to be the case. Despite the fact that there are about 18 secular English common law schools in Canada, with no faith-based alternative, the prospect of having one faith-based law school caused a level of opposition and rancor not seen before in Canadian legal history—and it is not over yet, not by a long shot. This debate will, in all likelihood, make it to the Supreme Court of Canada.

The furor against TWU has arisen in response to its “Community Covenant Agreement,” 2 a code of conduct that, among other expectations, requires all students to abstain from “sexual intimacy that violates the sacredness of marriage between a man and a woman.” 3 TWU’s definition of marriage stands in contrast to the “any two persons” definition of Canadian legislation.4 According to prominent lawyer Clayton Ruby, “this alone makes it [TWU] incompetent to deliver legal education in the public interest.”5

TWU has maintained that it does not discriminate against anyone, including those in the LGBTQ community. In fact, TWU accepts LGBTQ students, as they do all prospective students, on the basis of entrance requirements. However, TWU will expect all law students to abide by the “Community Covenant Agreement” during their course of study—it is required of the entire student body. This criterion, however, is not acceptable to the LGBTQ community, who demand nothing less than TWU’s complete capitulation on the matter.

The first jurisdiction to hold a hearing on TWU’s argument was the Supreme Court of Nova Scotia in December 2014. In January 2015 Justice Jamie Campbell released his decision.11 His was a damning indictment against the Barristers’ Society attempt to regulate TWU. He rejected the NSBS argument that the Community Covenant was “unlawful discrimination.” “It is not unlawful,” said Campbell. “It may be offensive to many, but it is not unlawful. TWU is not the government. Like churches and other private institutions, it does not have to comply with the equality provisions of the Charter [of Rights and Freedoms].” He continued that TWU “was not in breach of any human rights legislation that applies to it.”12

Justice Campbell recognized that Canadians have the right to attend a religious university that imposes a religiously based code of conduct, even if that code excludes or offends others who will not or cannot comply. “Learning in an environment with people who promise to comply with the code is a religious practice and an expression of religious faith. There is nothing illegal or even rogue about that. That is a messy and uncomfortable fact of life in a pluralistic society.”13 To demand that right to be sacrificed for state recognition of professional education was an infringement of religious freedom that could not be justified.

Though Canada is a secular society and becoming more so, Justice Campbell made it clear that the state must remain neutral on matters of religion and not favor one religion or no religion. “[The state] has not purged religiously informed moral consciences from the public sphere nor does it accord them more weight than others,” he noted. “The society is secular, but the state does not have a secularizing mission.”14 “The Charter is not a blueprint for moral conformity. Its purpose is to protect the citizen from the power of the state, not to enforce compliance by citizens or private institutions with the moral judgments of the state.”15 “The Charter does not apply to TWU. TWU is not engaging in unlawful discrimination. The fact that the NSBS and the Nova Scotia Human Rights Commission do not like it does not make it unlawful.”16

The Court reviewed the role of marriage as being a central institution to the faith and practice of Evangelical Christians.17 The codes of conduct incorporating such faith communicate the identity and ethos of the university. They “are seen as establishing a community ‘conducive to spiritual growth in the context of Christian colleges and universities.’ The environments are intended to be protected from influences that are detrimental to personal spiritual growth.”18

He noted that the NSBS’s jurisdiction only begins once an application is made to practice law in Nova Scotia. At that stage the NSBS has the authority to make the determination whether the applicant is qualified. The Barristers’ Society agreed that the TWU graduate would be no less willing to comply with the ethical standards regarding LGBT equality rights than anyone else. As to the law degree, the NSBS has no authority to define what is or is not a law degree,19 but it could prevent a person from practicing law if their degree did not properly train them for practice in Nova Scotia.20

Justice Campbell ruled that the NSBS was not regulating the graduate or the law degree, but was attempting to regulate the law school itself. Its decision had nothing to do with the qualifications of the students or the quality of the degree.21 It was clearly outside of its mandate. “The NSBS has no authority whatsoever to dictate directly what a university does or does not do,” said Campbell. Indeed, it could not require TWU to change its Community Covenant any more than it could regulate which professors should be granted tenure, what fees should be charged, or which admissions policies should be implemented.22

In short, the Barristers’ Society “cannot do indirectly what it has no authority to do directly.”23 TWU, like any other law school, can do what it wants and not worry about NSBS regulations. NSBS used its arbitrary definition of “law degree” to impose a penalty on the TWU graduate. The Community Covenant is a nonacademic policy subject to the British Columbia regulatory regime and “is unrelated to, irrelevant to and extraneous to the practice of law in Nova Scotia.”24

Despite the resounding loss, the Nova Scotia Barristers’ Society has decided to appeal. In its announcement of the appeal the society gave as justification for its appeal the following rationale: “If left unchallenged, this ruling may significantly restrict the scope of the society’s authority to uphold and protect the public interest in regulating the legal profession. It may also prohibit the society from continuing to take on a wider role in the promotion of equality in all aspects of its work, including in the administration of justice.”25

That statement speaks volumes of what is motivating the society.

They claim Campbell’s ruling would restrict the scope of the society’s authority. Justice Campbell made it very clear that the society has absolutely no legal authority to regulate law schools—especially those in another province. Even if it did, it was unreasonable in its lack of concern for the religious freedom issues. However, the society does not want to be limited by the current state of the law—it has much grander plans.

This statement of the NSBS not only reveals Justice Campbell’s wisdom in upholding the rule of law and rejecting the NSBS’s overreach, but also shows his prescience about how far NSBS’s radical ideas would go in trampling other Charter freedoms. The very radical nature of the NSBS agenda has been laid bare. Religious freedom of a religious university is clearly in the crosshairs of the Nova Scotia Barrister’s Society as it takes on “a wider role” to promote equality.

In other words, “Step aside! Mere religious freedom will not stop in our attempt to make Trinity Western University free!” Have we arrived at the point where our law societies can flagrantly disregard the law to push their own agendas forward? This isn’t as far-fetched as it seems. After all, a bencher of the Law Society of British Columbia was clear about his perspective on the law when he said, “We are the law!”26 This is a no-holds-barred attempt at the very moral conformity Campbell warned against.

Justice Campbell stated that the NSBS decision against TWU “amounts to a quota system by which TWU graduates who are more likely to be Evangelical Christians are discouraged from applying so that the proportion of LGBT lawyers is raised. A more direct approach would be to directly limit the number of heterosexual articled clerks to reduce the disparity. That is every bit as strange as it sounds. That is not how social progress is achieved in a liberal democracy.”27

It is strange—more than strange—for a law society to be so willing to take on the role of promoting one right (equality) over another (freedom of religion).

The rule of law is society’s protection against exactly what NSBS is now doing. The rule of law carries within itself recognition that the law has its limits. The law was never meant to interfere with civil society and destroy the organizations and communities that make a liberal democracy a place where we can mutually live lives in accordance with our deep moral and ethical commitments. Without the rule of law, those in power will inevitably use the rubric of “law” to do whatever they want—including the forceful interference in our religious and personal space.

At one point the secularists said, in effect, “As long as religionists stay to themselves we will leave them alone.”28 The religious community that founded TWU tried to do that—establish its own religious university as permitted by law and guaranteed by the Charter. Such universities are not new—they have been around for about 1,500 years.29 Now, unfortunately, the tables have turned—the law is being disregarded by those who claim to operate in the “public interest” as they seek “a wider role;” ensuring those universities are not left alone despite the fact that they follow the law and want to be left alone.

6 Federation of Law Societies of Canada, “Trinity Western University’s Proposed Common Law Program,” found at: http://www.flsc.ca/en/twu-common-law-program/. Though it also expressed concerns with TWU’s teaching of legal ethics and public law and the budget of the proposed law program.

11 The full decision is found online at: http://www.courts.ns.ca/News_of_Courts/documents/2015nssc25.pdf

26 Joe Arvay, bencher, British Columbia Law Society: “I don’t recognize that law, that kind of law, in this country. I don’t recognize a law that is so divorced from justice that we are bound by it. We are the law; we are the law-making body charged with making a decision at hand. So long as that decision is a reasonable one and that reflects both the objects of our statute and the Charter values we are bound to embrace, it will be a law that the Supreme Court of Canada respects. See: http://www.lawsociety.bc.ca/docs/newsroom/twu-transcript.pdf. PP. 46, 47

28 Richard Rorty, for example, argued that it would be bad taste “to bring religion into discussions of public policy.” “We shall not be able to keep a democratic political community going,” he argues, “unless the religious believers remain willing to trade privatization for a guarantee of religious liberty” (R. Rorty, Philosophy and Social Hope [London: Penguin, 2000]), pp. 169, 170.

29 Christian universities have been around at least since the sixth century—see Pierre Riché, Education and Culture in the Barbarian West (Columbia, S. Carolina: University of South Carolina Press, 1978).