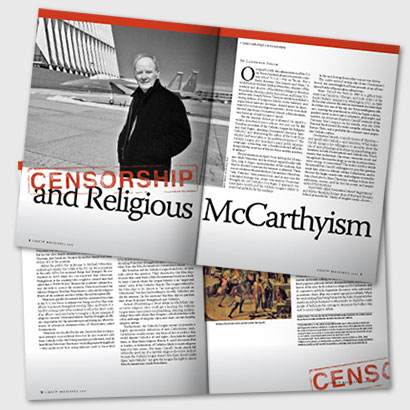 On April 9, 2008, the administration of the U.S. Air Force Academy planned to present a seminar titled “U.S.A.’s War on Terror: Not a Battle Between Christianity and Islam.” It would feature Michael (Mikey) Weinstein, alumnus of the academy and director of the Military Religious Freedom Foundation; Muslim scholar Reza Aslan; and former U.S. ambassador Joseph Wilson. Their presentation included a strong defense of religious liberty in the military, and argued that military doctrines should never be determined by sectarian religious interests. It was to include selected clips from Constantine’s Sword, a film documentary based on a book by James Carroll.

But the seminar did not go as planned. On April 8 a widely distributed press release was put out by Bill Donohue, president of the Catholic League for Religious and Civil Rights, decrying Constantine’s Sword as “anti-Catholic,” and denouncing the author of the book from which it had been taken as “an embittered ex-priest.” The Catholic League also launched a major public relations campaign, contacting over a hundred elected officials, along with the secretary of the Air Force and the secretary of defense.1

The presentation on April 9 was held up for 25 minutes while Weinstein and his friends argued loudly with Gen. John F. Regni, superintendent of the academy, that they be allowed to present the seminar as planned. There was no evidence whatsoever that Constantine’s Sword was “anti-Catholic,” they pointed out, and in any case the scheduled footage was about overzealous Protestant Evangelicals, not Catholics; but Regni, it appeared, was nonetheless terrified of the Catholic League’s ability to create bad publicity for the academy.

In the end, footage from other sources was shown.

The cadets missed seeing clips from Constantine’s Sword, but unwittingly had been present at an all-too-typical battle of the modern culture wars.

James Carroll was born in 1943 to a gifted Irish-American family in Chicago, and took orders at the Paulist Fathers’ seminary in Washington, D.C., in 1969. He became active in the antiwar movement at a time when his father was one of the top Air Force intelligence officers. Leaving the priesthood in 1974, he began a distinguished career as an essayist, columnist, playwright, and novelist. An American Requiem, Carroll’s memoir of the Vietnam War’s impact on his family, won the 1996 National Book Award. He writes a regular column for the Boston Globe, and is probably this country’s most important Catholic author.

Constantine’s Sword is Carroll’s history of Christian—and specifically Catholic—anti-Semitism. What makes Carroll unique is his willingness to speculate about the role of central theological doctrines in exacerbating anti-Semitism in both Protestantism and Catholicism. Was it merely that individual Christians misunderstood and misapplied Christian theology, or are the doctrines themselves wrong, to some extent? The reader is left to decide for himself; but Carroll’s willingness to pose the question made him a hero to liberals within Catholicism, and to those in the larger society who seek religious reconciliation. (And also to those Christians seeking to learn how militarism, racism, and the lust for power and empire entered Christendom.)

Garry Wills called Constantine’s Sword “Augustinian,” and Krister Stendahl, former dean of Harvard Divinity School, praised it for “clarity of insights rarely—if ever—reached in the telling of this painful story.” Susannah Heschel wrote: “For two thousand years Jews have been longing for a Christian who would understand their experience. At last James Carroll has written a book delineating the history of Christian-Jewish relations that demonstrates empathy and compassion for both sides.” Religion scholar Karen Armstrong thought it “heartfelt and eloquent,” suggesting that it could “do what the Vatican has signally failed to do: to help Catholics accept the truth, as a first step to repentance.”

It was Carroll’s willingness to ask hard questions about institutional Christianity that enraged the Catholic League. But their success in banning film clips of which they disapproved was infuriating to those who had organized the April 9 seminar at the U.S. Air Force Academy, especially Michael Weinstein. For one thing, he appeared in the censored footage. But he was also deeply attuned to Carroll’s concern about Christian anti-Semitism, because he and his family had been victims of it at the academy.

Mikey (he prefers the nickname to Michael) Weinstein endured anti-Semitic slurs while at the U.S. Air Force Academy in the early 1970s, but assumed things had changed. He was shocked in 2005 when his son reported that Christian Evangelicals at the academy who sought to convert him had called him a “#*&#+*% Jew.” Because the academy’s administration did little to correct the situation, Weinstein formed the Military Religious Freedom Foundation to advocate for religious liberty at the academy, and also within the military generally.

Weinstein quickly discovered that the command structure at the U.S. Air Force Academy was being used by Christian officers to promote Evangelical worship, films, and books. It is hard for a young cadet at the academy to refuse the direct order of an officer—and even harder to imagine a clearer example of religious coercion. Weinstein believes that the Evangelical officers responsible for the unwanted proselytizing are often followers of a fanatical, extremist form of Christianity called Dominionism.

Weinstein was shocked by the anti-Semitism that accompanied attempts to proselytize Jews; but he also received calls from Catholics who were being similarly proselytized. And he heard from Protestant Christians—including many Evangelicals —who understood that using military rank to force-feed
sectarian religion is a gross violation of the First Amendment.

But nothing could have prepared either the academy or its critics for what happened in February 2008. Three supposed “reformed terrorists,” who had been invited by the U.S. Air Force Academy to speak to cadets, shocked their audience by turning the academy’s historic fiftieth assembly into an old-fashioned revival meeting. They declared that Islam was satanic, that Evangelical Christianity was the cadets’ only hope, and advocated an apocalyptic religious war against the Muslim world. Mikey Weinstein was appalled by the negative publicity this episode generated, especially in the Muslim world. 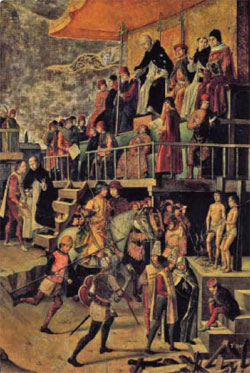 Burning of the Heretics (Auto-de-fé) by Pedro Berruguete

Weinstein proposed a seminar consisting of a Jew, a Christian, and a Muslim, who would jointly make the case for the war on terror within a context of religious coexistence. After some foot-dragging, the superintendent of the academy agreed, and the seminar was set for April 9, 2008. Footage of Weinstein speaking about religious liberty in the military was to be shown at the seminar, as well as clips of academy cadets attending Protestant Evangelical events. The footage would be taken from the film documentary Constantine’s Sword.
Bill Donohue and the Catholic League found out—or were told—about the seminar. They objected to the film clips because they came from a film documentary based on a book by James

Burning of the Heretics (Auto-de-fé) by Pedro Berruguete Carroll, whom the League believes is an “angry and unfair” critic of the Catholic Church. The League referred to the film clips to be shown as “an outrageous assault on Catholicism,” but they had nothing to do with Catholics, nor did the seminar. On the contrary—the film clips in question were about Protestant Evangelicals, not Catholics.

Instead of facilitating a robust debate in which their conservative religious ideas could get a hearing, the Catholic League seems more intent on intimidating, silencing, and punishing those with whom they disagree—which interferes with a free exchange of religious ideas and short-circuits healthy religious debate.

Furthermore, the Catholic League seemes to promote a highly questionable definition of anti-Catholicism. Anti-Catholicism usually means any form of law or politics that would deprive Catholics of civil rights, discriminate against them, or deny them religious liberty. It could also mean libel or slander, or defamation of Catholics likely to incite religious hatred or hate crimes. But James Carroll’s books clearly fall within the spectrum of acceptable religious discourse, and just because the Catholic League doesn’t like them doesn’t make them “anti-Catholic,” nor give the League the right to censor film documentaries made from them.

Interestingly, the Catholic League doesn’t appear to care much about real anti-Catholicism (Evangelical Protestant officers in the military using the command structure to proselytize Catholics, for example). Furthermore, Donohue has made bigoted statements about other groups, such as in a 2004 interview in which he said that secular Jews in Hollywood tend to hate Christianity.2 Critics pointed out that it was precisely this kind of generalization—or guilt by association—that was at the heart of Christian anti-Semitism historically.

Donohue has increasingly engaged in violent rhetoric. In 2007 the Catholic League led an intense, and ultimately successful, lobbying effort to prevent the showing of a sculpture consisting of a chocolate figure of Jesus at the Lab Gallery in New York. Donohue told the sculptor Cosimo Cavallaro, “You’re lucky I’m not as mean [as the Taliban] because you might lose more than your head.” Donohue also said to Cavallaro, “You stuck your middle finger up at the Catholic Church, and we just broke it, pal.” 3

Some people dismiss Bill Donohue and the Catholic League as harmless, yet their attacks have the power to destroy careers, relationships, and reputations. Above all, they are able to intimidate. In our time, the free exchange of religious ideas is threatened not just by the state, but also by cultural vigilantes who seek compliance with their theological extremism by using disinformation and name-calling. In the past, religious dissenters suffered pogroms, physical torture, dismemberment, and the public horror of the auto-de-fé; today it is religious McCarthyism, and its capacity to publicly stigmatize dissenters with unfounded accusations, that is often our society’s unique test of faith. While less excruciating than being burned at the stake, it impoverishes American culture because it so often works. So shall it be—until people of faith have the courage to denounce the bullies who seek to censor religious debate.

Lawrence Swaim is the executive director of the Interfaith Freedom Foundation. His academic specialties are American studies and literature. He writes from Fremont, California.