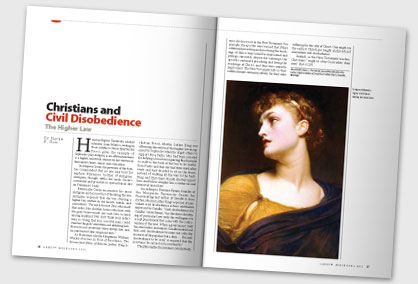 Houston Baptist University scholar/educator Louis Markos, writing in From Achilles to Christ (InterVarsity Press), gives the example of Sophocles’ play Antigone as an affirmation there is a higher, universal, immortal law written in humanity’s heart, mind, and conscience.

In Antigone Creon, the governor of the state, has commanded that no one may bury his nephew, Polyneices, brother of Antigone. Antigone, though, defies her uncle Creon’s command and proceeds to spread burial dirt on Polyneices’ body.

Eventually Creon encounters his niece Antigone and accuses her of breaking the law; Antigone responds that she was obeying a higher law written in our hearts, minds, and consciences: “For me it was not Zeus who made that order. Nor did that Justice who lives with the gods below mark out such laws to hold among mankind. Nor did I think your orders were so strong that you, a mortal man, could overrun the gods’ unwritten and unfailing laws. Not now, nor yesterday’s they always live, and no one knows their origin in time.”

As Protestant scholar/clergyman William Watley observes in Root of Resistance: The Nonviolent Ethic of Martin Luther King Jr. (Judson Press), Martin Luther King was affirming the reality of this higher law recognized by Sophocles when he urged others to support Rosa Parks, who had been arrested for defying a local law requiring Black people to walk to the back of the bus to be seated. Rosa Parks said that she had been tired after work and had decided to sit in the front, instead of walking all the way to the back. King said Christians should disobey unjust laws and follow a higher law, a universal and immortal moral law.

According to Terrence Rynne, founder of the Marquette University Center for Peacemaking and author of Gandhi & Jesus (Orbis), Martin Luther King’s espousal of non-violent civil disobedience echoes sentiments expressed by Gandhi: “Civil disobedience, for Gandhi,” wrote Rynne, “was the direct disobeying of particular laws with the willingness to accept punishment that came with the contravention of the laws. When a government itself became lawless and unjust, Gandhi understood that civil disobedience became not only the recourse of the populace but a duty. . . . For civil disobedience to be ‘civil,’ it required that the resistance be carried out nonviolently.”

The philosophy of nonviolent civil disobedience also has roots in the New Testament. For example, the apostles were warned that if they continued preaching and practicing the teachings of Christ, they would be imprisoned and perhaps executed; despite the warnings, the apostles continued preaching and living the teachings of Christ, and they were unjustly imprisoned. The New Testament tells us they suffered imprisonment joyfully, for they were suffering for the sake of Christ. One might say the earliest Christians taught and practiced nonviolent civil disobedience.

Indeed, as the New Testament teaches, Christians “ought to obey God rather than men” (Acts 5:29).

Haven Bradford Gow is a TV and radio commentator and writer who teaches religion to children at Sacred Heart Catholic Church, Greenville, Mississippi.