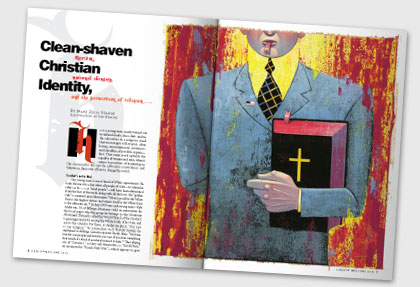 He is a young man, neatly turned out in tailored slacks, dress shirt, and tie. He subscribes to a religious creed that encourages self-respect, clean living, environmental awareness, and a healthy—if possible, organic—diet. That same creed upholds the equality of women and men, when it comes to positions of leadership in the community. He says he advocates nonviolence and believes in the power of love to change the world.

Our young man is a new breed of White supremacist. He looks forward to a day when all people of color—to whom he refers as N-----s or “mud people”—will have been eliminated from the face of the earth, along with all the Jews. His “golden rule” is summed up in the maxim “What is good for the White Race is the highest virtue, and what is bad for the White Race is the ultimate sin.”1 In July 2009 one such young man—Kyle Anderson, 19, of Billings, Montana—told an interviewer for the local paper why the group he belongs to, the Creativity Movement (formerly called the World Church of the Creator), is gaining popularity among the White youth of his state, and across the country. For them, as Anderson put it, “Our race is our religion.” To rationalize such blatant racism, he explained to Billings Gazette reporter Becky Shay, “We have love for our people and love for our race. If you love something that much, it’s kind of a natural instinct to hate.”2 The rallying cry of “Creators,” as they call themselves, is “RAHOWA,” an acronym for “Racial Holy War”—which appears to give the lie to their pretenses of nonviolence.

Now, we Montanans may be especially touchy regarding news stories about dangerously divergent individuals and groups, since for most of the 1990s that was how Montana customarily made the national nightly news. In 1993 a series of anti-Semitic activities in Billings resulted in the PBS documentary Not in Our Town, and the nationwide antihate initiative bearing that same name. Unabomer Ted Kaczynski was able to keep a low profile in the mountain logging town of Lincoln for 18 years, until his arrest by the FBI (on a tip-off by his brother) in 1996. That was followed by an 81-day armed standoff between federal agents and the Freemen, a so-called Christian Patriot group based outside of Jordan. About that same time the Militia of Montana (or MOM for short) was gaining notoriety as one of the most virulent antigovernment groups in the nation. The World Church of the Creator was at the same time among the most high-profile hate groups in the U.S.

Things have quieted down considerably in Big Sky Country since the nineties. So young Anderson’s turn in the media limelight, accompanied by a rash of White supremacist leafleting and graffiti in Billings, came to many of us as an unwelcome blast from the past. Yet given the current political and economic climate, it shouldn’t have come as a surprise—nor is such reinvigorated racism limited to the Rocky Mountain West these days. According to the Southern Poverty Law Center (SPLC), which tracks the activities of hate groups around the country, there has been a marked increase in White supremacist activity nationwide in recent months. In part it appears to have been spurred by U.S. Census Bureau projections last August that the “other than White” minorities that now account for one third of the U.S. population will by 2042 be in the majority. This news had even mainstream conservatives taking notice. Pat Buchanan remarked on MSNBC that White Americans could now expect to suffer “exactly what was done to Black folks.” Meanwhile, Fox News contributor Dick Morris proclaimed, “Those crazies in Montana who say, ‘We’re going to kill ATF agents because the U.N.’s going to take over’—well, they’re beginning to have a case.”3

In addition to the shifting demographics, the presidential campaign and election of Barack Obama has obviously provided a key accelerant for White supremacist organizing. Abraham Foxman, national director of the Anti-Defamation League (ADL)—surely no stranger to the rhetorical excesses of hate groups—described the outpouring of racist rage following Obama’s election as “startling.”4 However, given the fact that most hate groups claim religious or theological underpinnings for their politics, it may not really be all that shocking. It is arguably a right-wing extremist reaction to the “Obamania” that swept college and university campuses in the run-up to November 2008. And, like the more exaggerated forms of its left-wing counterpart, this particular enthusiasm seems to have a special appeal for younger Americans.

Two things stand out about this newest iteration of religious racism. One is that its proponents don’t conform to stereotype. As Kyle Anderson put it: “People used to think of a guy with a beer belly spitting out tobacco and missing a few teeth. Now we think of people who are determined, energetic leaders, educated and idealistic, we’re the best Creators. We’re the elite.”5 White-power groups are today specifically targeting the cultural mainstream. They are aiming for a softer image, stressing education and family values, and picking up on trends in popular culture. Stormfront, the country’s largest White-power Web site (claiming 144,000 members), has, for example, established social networking pages on themes ranging from arts and culture to home schooling and managing household finances in tough economic times.6 The Ku Klux Klans’s Web site trumpets its contemporary mission thusly: “Bringing a Message of Hope and Deliverance to White Christian America! A Message of Love NOT Hate!”7 In October 2009 the KKK celebrated its annual “White Christian Heritage Festival” in Pulaski, Tennessee. Downplaying the Klan’s violence-saturated history, the event was open to “the General Public and ALL White Nationalists and Lovers of Freedom and Liberty.”8 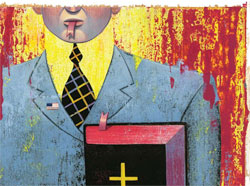 A second distinguishing feature of White supremacist activity today is the movement’s explicit appeal to young people, particularly young males. The Montana Human Rights Network has been tracking these groups since 1990. I asked its director, Travis McAdam, about the youth angle. “That’s how a White supremacist who’s smart is going to do it,” he said. “Part bad revisionist history, part anti-Semitism, you make it an ‘alternative choice’ for youth.”9 With the majority of White supremacists now under age 35, McAdam expects to see the trend continue.

For some White-power proselytizers the way to young men’s hearts is through their MP3 players. Arkansas-based racist skinhead “Byron Calvert” (a pseudonym) sponsors Project Schoolyard, a campaign to get supremacist CDs into the hands of middle-school children. Featured bands sport names such as RAHOWA, Brutal Attack, and Skrewdriver, performing such songs as “Race Riot,” “Some N-----s Never Die,” “White Power,” and “Aggravated Assault.”10 Upwards of 300 Web sites are today targeting White working-class youth, with offers of literature, hate-rock CDs, T-shirts, and other paraphernalia.11 The SPLC speculates that, as the economic crisis deepens and jobs continue to evaporate, the appeal of hate groups stands to increase, along with incidents of hate-related violence.

We as a society don’t like to think of such violent attitudes and behavior as being grounded in a religious point of view—or at least, not an American one (Islamic jihadists are, for many, another matter). Yet, although some groups such as Christian Identity do it more obviously than others, virtually every White-power organization couches its bigotry in the guise of Judeo-Christian mythology. Racial purity, and the hatred that logically and inevitably goes along with it, are in their telling as old as the Garden of Eden. The general outlines of the story are as follows: In Adam, God created a White human race, and northern Europeans are the true descendants of the biblical Israel. Meanwhile, Jews and “mud people” are identified with the nonhuman (or subhuman) animals God made before He got around to forming Eve from Adam’s rib. While there are variations on its essential themes, the subsequent history of fallen humanity takes the form of a struggle for Whites to regain, and retain, dominion over all the earth. The apocalypse, which is very near at hand, will take the form of a race war in which Whites will be victorious and Jews and non-Whites will be obliterated once and for all.

Black liberation theologian James Cone of Union Theological Seminary has argued that this version—or perhaps more properly speaking, perversion—of Christian mythology has not been sufficiently challenged by the religious establishment in this country. In a 2006 interview with America: The National Catholic Weekly, he said that “both Catholic and Protestant theologians do theology as if they do not have to engage with the problem of White supremacy and racism.” Youths such as Kyle Anderson, with their distorted view that race itself is religion, are among the unfortunate outcomes.

Rhetoric about “love, not hate” notwithstanding, youthful rebellion coupled with religious zeal can make for a potentially lethal combination. In October 2008, federal agents arrested two skinheads, ages 18 and 20, who were planning to don white tuxedos, massacre children in a Black school, and attempt to assassinate then-presidential candidate Obama. The young men, who professed “very strong views” about White power, were from Arkansas and Tennessee; they met over the Internet.12 After the presidential election, in Staten Island, New York, a Black teenager was attacked by four White teens who yelled “Obama” as they beat him. Meanwhile, a general store in Standish, Maine, displayed a poster advertising an “Osama Obama Shotgun Pool,” a lottery soliciting bets on when Obama would be assassinated.13 More recently, an adolescent prankster posted a poll on Facebook, asking “Should Obama be killed?”14

While the last was deemed by the Secret Service not to constitute a serious threat to the president’s safety, the fact that the posting occurred at all—not to mention that in short order more than 700 people had “voted” before the page was taken down—suggests a cultural context in which the kind of violence advocated by hate-based groups has, at least for some segments of American society, gained an alarming degree of acceptability. The extent to which this advocacy is couched in religious terms makes its censorship problematic, from a constitutional point of view. So, too, does the fact that it can masquerade as social respectability.

Yet the extremism that advocates “Racial Holy War” in the name of “Christian Heritage” amounts to the same sort of hijacking of Christian theology as does the popular support of suicide bombers among more extreme elements of the Muslim population globally. In neither case should American social discourse allow such views to go unchallenged. And surely, in both cases, part of the task facing us as a civil society is to address the social and economic factors that give rise to hate groups, and their earnest young disciples such as Kyle Anderson, in the first place.

Mary Zeiss Stange divides her time between her position as professor of women’s studies and religion at Skidmore College in Saratoga Springs, New York, and southeastern Montana, where she and her husband, Doug, operate the Crazy Woman Bison Ranch.