In a speech to the Notre Dame student body during the 1984 U.S. presidential campaign, New York governor Mario Cuomo addressed the issue of church-state relations and the growing activism of the so-called Religious Right. The governor said: "Are we asking government to make criminal what we believe to be sinful because we ourselves can't stop committing the sin? The failure here is not Caesar's. This failure isour failure—the failure of the entire people of God"1

As a conservative Christian pastor who seeks to uphold biblical morality before two congregations on a weekly basis, I find the above question both moving and disquieting. Though spoken more than two decades ago, it still strikes at the heart of America's moral dilemma.

Secularism or Hypocrisy?
Perhaps the central rallying cry of the Religious Right concerns America's presumed slide toward secularism. One may perhaps argue about definitions, but if one understands secularism as overt disbelief in the fundamentals of religion, it is difficult to apply this term to the United States of America.


Five years ago in U.S. News & World Report it was noted that 96 percent of Americans claim to believe in God.2 Recent surveys show that four out of ten Americans attend church or synagogue at least once a week,3 with 66 percent attending at least once a month.4 In one of these surveys, 59 percent declare religion to be "very important" in their lives,5 and in another, 90 percent claim membership in some religious organization.6 Most recently of all, a Newsweek poll published in December 2004 showed 84 percent of Americans calling themselves Christians, 82 percent declaring Jesus to be either God or the Son of God, 79 percent professing belief in the virgin birth of Christ, and 67 percent saying they believe the Christmas story as recorded in the New Testament to be historically accurate.7 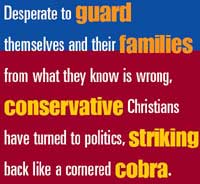 Little wonder that conservative historian Garry Wills has observed that "the first nation to separate Christianity from government produced perhaps the most religious nation on earth."8

Why, then, is biblical morality collapsing all around us? Cultural conservatives, especially Christians, are fond of blaming the media in general and Hollywood in particular. But too many fail to stop and consider that the entertainment industry, like all industries, operates by the golden rule—"he who has the gold rules." What customers buy, merchants sell. It is fair to say that if even a majority of professing Christians in America would simply stop buying or viewing the moral trash produced by Hollywood, today's popular movies would likely be very different.

On November 28, 2004, on NBC'sMeet the Press , moderator Tim Russert pointed out to a panel of mostly conservative Christian pastors that surveys show the television series Desperate Housewives, with its flaunting of suburban adultery, to be "especially popular" in the Southern Bible Belt. (In reply, the ministers could offer no explanation as to why this was true.)
I was reminded of the Meese Commission on Pornography back in the 1980s, when a state attorney from North Carolina reported that while at least 80 percent of his state's residents were conservative, churchgoing Christians, North Carolina held "the largest number of pornography outlets" of any state in the Union.9* [Editor's note:We were unable to confirm this finding, but even if true, it may well not reflect easy availability of pornography at sources not defined as "pornography outlets" by the A.G.] The attorney then asked, "Is it the churchgoers who are creating the market or is it the other 20 percent?"10 A prosecutor from the same state answered with a bit of folksiness, "You know, we also have this saying in North Carolina—that we will all vote dry as long as we can stagger to the polls."11

Some may find this amusing, but in reality it is both sad and frightening. Hypocrisy is frequently the twin sister of intolerance, as the saga of the Pharisees in Christ's day bears witness. Again the words of Governor Cuomo come to mind—Christians asking the government to criminalize sins they can't seem to stop committing. In light of this, we are compelled to ask, Is America's problem truly one of secularism?

Powerless Grace
During the presidential scandal under the previous administration, Newsweek religion editor Kenneth Woodward wrote an editorial titled "Sex, Sin, and Salvation," which examined the former president's theological upbringing.12 Considering its implications for much of mainstream Christian theology, one is amazed that this editorial received so little attention in Christian circles. But it offered a stinging—and I fear much-deserved—indictment of the popular evangelical doctrine of grace and salvation.

Regarding this doctrine, Woodward wrote of how former President Clinton was raised believing that "once he was born again, his salvation was ensured. Sinning—even repeatedly—would not bar his soul from heaven."13 Woodward closed his editorial by observing that Clinton "learned his worldview not in the dark of a Saturday night but in the light of a Sunday morning."14

In a monstrous yet much-unnoticed irony, this theology is one thing the former president shares in common with those evangelicals who thirsted for his political blood. Many of those calling for his removal from office were mainstream, "grace-oriented" evangelicals who hold to the once-saved-always-saved, salvation-apart-from-obedience theology so common in those circles. But if, as their theology teaches, such sins couldn't cost the former president his place in heaven, why should they have cost him the presidency?

The dilemma created by this doctrine of powerless grace is painfully evident in a popular book by one best-selling Christian author. At one point he offers a very appropriate criticism of the methods employed by the Religious Right:

"The state must always water down the absolute quality of Jesus' commands and turn them into a form of external morality—precisely the opposite of the gospel of grace. . . .It [the New Testament] commands conversion and then this: 'Be perfect. . . as your heavenly Father is perfect.' Read the Sermon on the Mount and try to imagine any government enacting that set of laws." 15

Quite true. The problem is, this same author insists elsewhere that the perfection commanded by Jesus—and made possible, according to Scripture, by the Holy Spirit's power through conversion (Romans 8:13; 2 Corinthians 7:1; Philippians 4:13; 1 Thessalonians 5:23)—is impossible to attain.16 Tragically, most Christians who profess to revere the Bible have embraced this clear departure from its teachings. And the end result is that those holding to such a view invariably find a comfort level with their more persistent shortcomings. Multiply this on the wide scale of our contemporary culture, and moral chaos is the sure result. Meanwhile, technology, communication, and the fast pace of modern life make sin ever more intrusive within the church's once-safe subculture. Desperate to guard themselves and their families from what they know is wrong, conservative Christians have turned to politics, striking back like a cornered cobra. They mean well. They want the best for those they love. But the "gospel" at the core of their faith has long since made room for sin, and the society in which they find themselves—much of which professes the same Christian faith—reflects this accommodation.

The best-selling author cited above preaches a gospel that replaces the categories of "righteous" and "guilty" with "sinners who admit" and "sinners who deny."17 Sadly, unlike the biblical book of Revelation (2:7, 11, 17, 26; 3:5, 12, 21; 12:11; 21:7), this author lists no category for sinners who overcome. Elsewhere his book laments, correctly, that when Christians in past ages succumbed to the lure of politics, "grace gave way to power."18 What he seems not to understand is that when the grace Christians teach is stripped of its power over sin, carnal forms of power become an irresistible substitute.

Coercion or Conversion?
The apostle Paul declares, regarding the Christian's struggle with evil:
"For the weapons of our warfare are not carnal, but mighty through God to the pulling down of strong holds. Casting down imaginations, and every high thing that exalteth itself against the knowledge of God, and bringing into captivity every thought to the obedience of Christ" (2 Corinthians 10:4, 5, KJV).

Here we see, according to Scripture, what God's power is capable of doing when received by choice into the life. In the absence of this power, accommodation at some level to one's favorite (or most persistent) sins is inevitable. And when faced with sin's destructive consequences in themselves, their families, and society, Christians know their credibility before the world is at stake. So they strike back with carnal weapons rather than spiritual ones. This spiritual bankruptcy is the direct progeny of powerless grace, the end-time condition described in Scripture as "having a form of godliness, but denying the power thereof" (2 Timothy 3:5, KJV). When the church finds itself bereft of this power, another power is brought in. Coercion becomes a substitute for conversion.