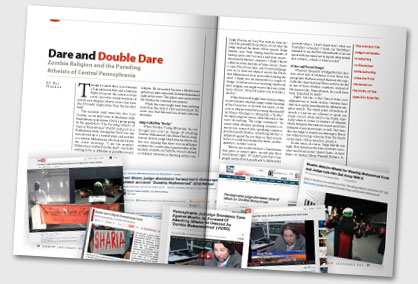 Though it sounds like a cross between a B-grade horror film and a Saturday Night Live spoof, this article is about a real case with crucial freedom of speech and religious liberty issues that have much broader implications than the incident itself.

The incident itself went like this: Last October, in the little town of Mechanicsville, Pennsylvania (population 9,000), a group going by the appellation "The Parading Atheists of Central Pennsylvania" (PACP) took part in a Halloween parade. Among the PACP was one man dressed up as a zombie pope, and another as a zombie Muhammad, who marched down the street chanting, "I am the prophet Muhammad, zombie from the dead"—no doubt seeking to be as offensive as possible toward religion. He succeeded, because a Muslim man got into an altercation with Zombie Muhammad right on the street. The police came and arrested the Muslim for criminal harassment.

While the scene might have been nothing more than the clash of a few narrow minds, the court case that followed has drawn national attention.

Judge Called Him "Doofus"
When Muslim Taalag Elbayomy, 46, was brought into court on charges of attacking Zombie Muhammad (aka Ernie Pierce), magisterial district judge Mark Martin threw out the case, arguing that there was insufficient evidence for a conviction (a grainy video of the incident, available on YouTube, was not allowed as evidence). However, in throwing out the case, Judge Martin, an Iraq War veteran, then lectured the plaintiff, Ernie Pierce, about what the judge deemed the limits of free speech. Judge Martin said: "Well, having had the benefit of having spent over two and a half years in predominantly Muslim countries, I think I know a little bit about the faith of Islam. In fact, I have a copy of the Koran here, and I would challenge you, sir, to show me where it says in the Koran that Muhammad arose and walked among the dead. I think you misinterpreted a couple of things. So before you start mocking somebody else's religion, you might want to find out a little more about it. It kind of makes you look like a doofus."

While that itself might have been pushing it (one wonders what the judge's understanding of the Koran has to do with the merits of the case, or why he would be lecturing the plaintiff on Islamic theology or calling him a "doofus" for expressing his views), what followed is the most disturbing. The judge continued: "In many other Muslim-speaking countries, er, excuse me, many Arabic-speaking countries, predominantly Muslim, something like this is definitely against the law there, in their society. In fact, it could be punished by death, and frequently is, in their society.

A Clear and Present Danger
Whatever the merits of Judge Martin's decision about lack of evidence, it was those two paragraphs that have caused the most stir, especially the claim that had Pierce acted as he did in one of those Muslim countries, instead of Mechanicsville, Pennsylvania, he could have been "punished by death."

Right, but this is the United States, not Afghanistan or Saudi Arabia. Citizens here don't face capital punishment for offensive religious speech. The whole point of freedom of speech is that we are allowed to speak our minds on just about every issue, freely, especially when it comes to matters of religion; which brings in free exercise clause and establishment clause protections as well. One wonders the judge's rationale in referring to Sharia law while lecturing someone from the bench on the limits of free speech in America.

In one sense, of course, Judge Martin was right. Free speech protections, however sacrosanct and broad in the United States, do have limits. As Justice Oliver Wendell Holmes, Jr., famously wrote in Schenck v. United States: "The most stringent protection of free speech would not protect a man falsely shouting fire in a theater and causing a panic. . . . The question in every case is whether the words used are used in such circumstances and are of such a nature as to create a clear and present danger that they will bring about the substantive evils that Congress has a right to prevent." One, though, could hardly call a parading atheist of central Pennsylvania shouting some inanity such as "I am the Prophet Muhammad, zombie from the dead" a "clear and present danger."

Judge Martin made matters worse by invoking what he thought the forefathers meant by the First Amendment's free speech protections. Putting aside the difficult jurisprudential issue of "original intent" (that is, how relevant are the forefathers' intentions in interpreting the Constitution today?), one could argue, contra Judge Martin, that it is precisely those who want to "provoke others" or to offend "other people and cultures" that the free speech clause was written to protect. As has been said on numerous occasions, if free speech protections were limited to only what wasn't offensive, we'd have no free speech at all, because people can be easily offended.

One reason, for instance, that the American Civil Liberties Union successfully defended the right of American Nazis to march in Skokie, Illinois, even though many Holocaust survivors lived there (the precise reason the Nazis picked that location) was that the ACLU understood that offensive speech needs to be protected. Plus Judge Martin in the zombie case would have done himself a favor by having read some of the anti-Catholic literature produced in the early years of the American experiment; that way, he'd understand that offensive speech, even against religion, has enjoyed broad First Amendment protections from the earliest days of our nation. However well his intentions, Judge Martin should have thrown out the case on its own merits and saved his faulty First Amendment exegesis for another time.

Blasphemy Laws
However ridiculous this whole thing is, it does highlight a broader and deeper concern: the lack of free speech rights in nations in which, as Judge Martin rightly pointed out, Zombie Muhammad would have found himself dangling from a rope. Many countries do have "blasphemy laws" that are used now to imprison or even execute violators, some of whose cases have become international causes.

Worse was an attempt at the United Nations a few years back to pass a resolution making it a human rights violation to defame a religion. Exactly what "defamation" entailed wasn't fully expressed, and many saw it as an attempt by some nations to get United Nations sanction for their own blasphemy laws. The resolution, first formulated by the Organization of the Islamic Conference (now renamed the Organization of Islamic Cooperation), was passed in the United Nations Commission on Human Rights (now the Human Rights Committee) in 2009 as a nonbinding resolution condemning "defamation of religion" as a human rights violation.

Though the resolution was nonbinding, almost immediately after it was passed opposition arose. One nongovernmental organization, the Center for Inquiry, argued that "any protection of religious believers must not discriminate against nonbelievers, religious minorities, and religious dissidents. Their right to criticize and dissent from religious belief must be protected." For two years after the passage, various NGOs, including the Center for Inquiry and dozens of Muslim groups, worked to overturn it. The Organization of Islamic Cooperation, meanwhile, introduced it to the General Assembly twice, in 2009 and 2010, but it never passed, and though some are still pushing for it, it hasn't progressed.

Instead, in July of 2011 the Human Rights Committee passed "Article 19: Freedoms of Opinion and Expression," which reads, in part: "Freedom of opinion and freedom of expression are indispensable conditions for the full development of the person. They are essential for any society. They constitute the foundation stone for every free and democratic society. The two freedoms are closely related, with freedom of expression providing the vehicle for the exchange and development of opinions. . . . Prohibitions of displays of lack of respect for a religion or other belief system, including blasphemy laws, are incompatible with the Covenant. . . . Thus, for instance, it would be impermissible for any such laws to discriminate in favor of or against one or certain religions or belief systems, or their adherents over another, or religious believers over nonbelievers. Nor would it be permissible for such prohibitions to be used to prevent or punish criticism of religious leaders or commentary on religious doctrine and tenets of faith."

This hasn't been passed yet by the General Assembly, and even if it were to be, one could be skeptical on how much good it would really do, for instance, in a country such as Afghanistan, where public reaction over the accidental burning of the Koran caused more public disturbances than did the murder of 16 Afghans, many of them children.

Sharia in Pennsylvania?
Though not as extreme as in some places, America has its own problems with intolerance, as seen in the response against Judge Martin's injudicious speech in the courtroom. When the story first broke, the media reported that Judge Martin was a Muslim, a falsehood (based on a transcription error of the court proceedings) that only made his faulty dressing-down of Zombie Muhammad appear worse than it was. One headline even read "Sharia Law in Pennsylvania." It was a ridiculous twisting of what happened in the courtroom that day.

In fact, Mark Martin is a Lutheran, has been one for 41 years. He was also 27 years a reservist, and has done tours of duty in both Iraq and Afghanistan, and is scheduled to return to Afghanistan—places in which he no doubt learned about Islamic sensitivities, which probably influenced his inappropriate words to the plaintiff. And though later Judge Martin said that he didn't doubt that the incident had occurred, "the Commonwealth failed to prove to me beyond a reasonable doubt that the charge was just; . . . I was basically presented only with the victim's version, the defendant's version, and a very intact Styrofoam sign that the victim was wearing and claimed that the defendant had used to choke him. There were so many inconsistencies that there was no way that I was going to find the defendant guilty." His ruling had nothing to do with Sharia law and everything to do with basic, if slightly bungled, American criminal jurisprudence.

Nevertheless, as the story spread, the judge and his staff had, apparently, received death threats, and so, as of this writing, they have been relocated to a safe place until our own homegrown version of religious intolerance ceases to be a threat, at least in the very bizarre case of Zombie Muhammad and the Parading Atheists of Central Pennsylvania.