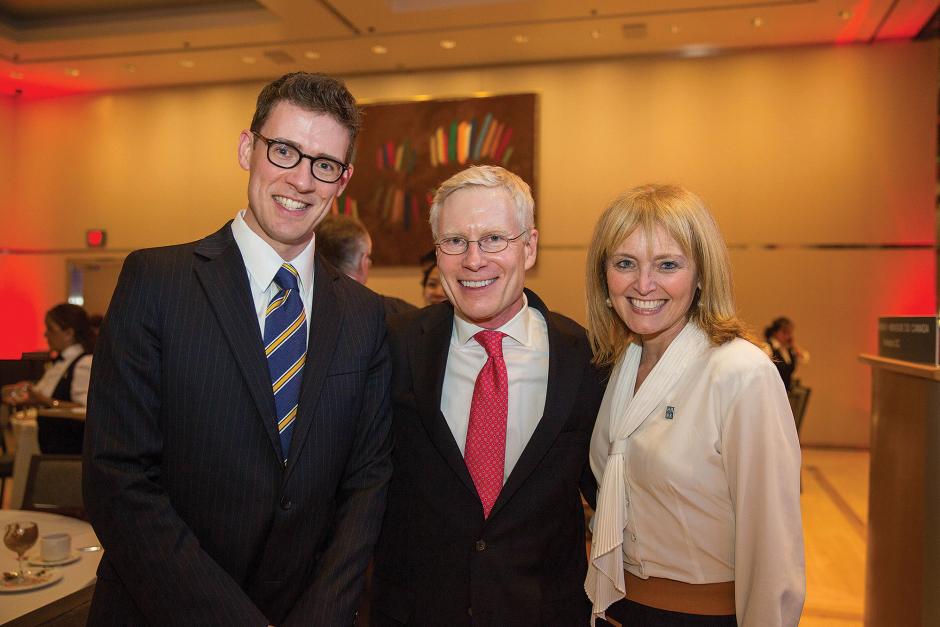 The Eleventh Annual Religious Liberty Dinner took place on April 18, 2013, at the Canadian Embassy—again. It’s always good to be invited back to meet with friends, especially when there is something to share. Last year Canadian foreign minister John Baird spoke to the Adventist-sponsored group that as usual included a good mixture of the Washington diplomatic corps, staffers from the U.S. Congress, and an interdenominational mix of religious freedom advocates. The minister’s news then was the imminent establishment of a new office of religious freedom for the Canadian government.

Fast-forward to our 2013 dinner. The featured speaker was the just-appointed ambassador for that new office, Andrew P. W. Bennett—it was his first public appearance outside of Canada.

Ambassador Andrew P. W. Bennett delivered a wide-ranging address, reinforcing the Canadian government’s commitment to fighting religious oppression around the world. “Religious groups who face persecution will know that they have a friend and supporter in Canada,” said Ambassador Bennett. “We will continue to strongly condemn all attacks on places of worship, whether at temples, synagogues, shrines, mosques, gurdwaras, or churches. It is of utmost importance that every individual be able to practice his or her faith free from the threat of violence and discrimination.”

The ambassador further noted that religious freedom doesn’t simply happen; effort is required. “We will continue to voice our concern when our fellow human beings are persecuted for their religious beliefs. I am heartened and emboldened by those who speak out, thus putting their own safety at risk so that others may enjoy the same rights and freedoms.”

Present at the event was U.S. ambassador for international religious freedom Suzan Johnson Cook, who seized on the moment to affirm her intention to work closely with the Canadian initiative. Cook had herself spoken at the Religious Liberty Dinner two years earlier, as the first significant appointment after her being named ambassador.

Two others were honored at the Eleventh Annual Religious Liberty Dinner. Receiving the national award, presented by Liberty magazine editor Lincoln Steed, was Charles C. Haynes, director of the Religious Freedom Education Project at the Newseum in Washington, D.C., and chair of the Committee on Religious Liberty of the National Council of Churches. International Religious Liberty Association (IRLA) director John Graz presented the International Award to Katrina Lantos Swett. She is the chair of the United States Commission on International Religious Freedom. Swett’s gracious and dynamic acceptance speech was the capstone to the event, her own deeply held commitment to religious freedom much in evidence—something clearly derived from the experience of her father, the late Senator Tom Lantos, the only Holocaust survivor to serve in Congress.

There will be more Religious Liberty Dinners at other locations—perhaps even back at the Russell Senate Caucus Room, scene of the Watergate and Titanic hearings—but this more than any dinner yet showed the interconnected nature of the defense of religious freedom and the role that the Seventh-day Adventist Church can play through Liberty magazine, our legislative liaison work, the IRLA internationally, and in the United States and Canada through the North American Religious Liberty Association.