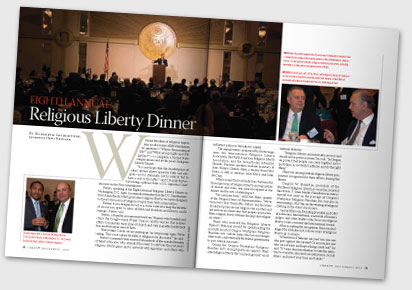 Without freedom of religious expression, no discussion of life’s fundamental questions—“What is the meaning of life?” and “What are my rights and obligations?”— is complete, a United States congressman said at this year’s Religious Liberty Dinner.

“It is my hope that the ‘marketplace of ideas’ always allows space for faith and religion—not to dominate, not to control, but to have a seat at the table,” said J. Randy Forbes, borrowing a phrase from a U.S. Supreme Court decision on the First Amendment.

“Rather, it was designed to act as a cruise control to keep the throttle of discussion open so ideas of faith and freedom and liberty could emerge,” Forbes said.

Forbes, a Republican representative from Virginia who founded and chairs the Congressional Prayer Caucus, said he worries that zealous efforts to maintain separation of church and state may effectively block free and full expression of faith.

“Everywhere I look, we are putting up ‘no trespassing’ signs. We’re saying, ‘This is not a place for faith or religion to be discussed,’” he said.

Forbes’s comments were received by hundreds of like-minded freedom of belief advocates, who attended the event to celebrate the past year’s religious liberty gains and to network with legislators and others who influence policy in the nation’s capital.

Richard Land, left, of the Ethics and Religious Liberty Commission for the Southern Baptist Convention with Peter Kovach of the Office of International Religious Freedom for the U.S. State Department.

Where many find contradictions between the free expression of religious liberty and separation of church and state, one award recipient at the dinner said he sees a balancing act.

“We can have both,” said Dave Hunt, speaker of the Oregon House of Representatives. “We’ve been very clear that public dollars and decisions should not promote one religion over another and yet we have also been clear that people can practice their religion freely without forcing that religion on others.”

“Religious liberty and neutrality are not and should not be partisan issues,” he said. “In Oregon we proved that people can come together across party lines, across faith traditions, and do the right thing.”

Hunt was among several religious liberty proponents recognized for their efforts during the dinner.

Gregory W. Hamilton, president of the Northwest Religious Liberty Association, received the 2010 A. T. Jones Medal. Hamilton was instrumental not only in the passage of Oregon’s Workplace Religious Freedom Act, but also in overturning a 1923 ban on the wearing of religious clothing in the state’s classrooms.

Samuel Ericsson, founding president and CEO of Advocates International, a network of lawyers, judges, and other leaders who focus on religious liberty issues, received the International Award.

After accepting the recognition Ericsson challenged the attendees not to leave issues of religious liberty up to chance.

“What kind of believer are you? Are you one who goes against the current? Or are you just one who sort of waits and hopes things work out?” he said. “It’s your decision whether to take the initiative, be available, demonstrate enthusiasm, recruit others, and invest your time and talents.”