According to InterVarsity Press, "The intelligent design theory has become the center of a growing controversy among state boards of education around the country as school board members and parents ask their local school boards to allow intelligent design to be taught in their science classrooms." Intelligent design is a truth-claim about the origin of the universe that employs mathematical, scientific, and biological evidence to derive data from nature to help prove and conclude that an intelligent cause is responsible for the order, harmony, complexity, and design in nature.

To evolutionists, intelligent design simply is another version of "scientific creationism" and a way to use the guise of scientific enterprise to bring religion into the public schools. Proponents of intelligent design, on the other hand, insist that their theory is indeed scientific and is buttressed by a wealth of evidence that the universe simply could not have come together on its own.

Phillip Johnson, a law professor at the University of California (Berkeley) and author of The Right Questions (InterVarsity), observes that "the intelligent design movement started in 1993. . . .The ID movement started in order to explore ways to bring to public attention scientific and philosophical weaknesses in Darwinian theory." 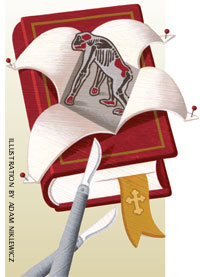 Can someone be both a proponent of evolution and of intelligent design? Johnson responds: "A design can be executed gradually, but the Darwinists who control scientific publication define evolution as entirely purposeless and undesigned, involving no intelligence. Under that definition, evolution excludes intelligent design.".

An informative and thought-provoking 2001 Gallup poll revealed that 45 percent believe God created human beings and the universe in its present form; 37 percent think God used the evolutionary process to make humans and the world the way they are today; and 12 percent insist that evolutionists are correct and that God had no role in the creation of humanity and the world. The same poll found that only 33 percent accept the theory of evolution as correct, while 57 percent said they believe in creation (10 percent said they were undecided).

Writing in the February 2002 Scientific American, science writer Michael Shermer sharply rebuked efforts to promote in natural science classes in the public schools such concepts as "creation science" and "intelligent design." Shermer observed that "it is not enough to argue that creationism is wrong; we must also show that evolution is right." He quoted, with approval, Charles Darwin's statement that "it appears to me. . . that direct arguments against Christianity and theism produce hardly any effect on the public; and freedom of thought is best promoted by the gradual illumination of men's minds which follows from the advance of science."

Conversely, Charlie Reese, a conservative social critic and syndicated columnist, argued in the January 9, 2002, Clarion-Ledger, Jackson, Mississippi, that "when we consider the size of the galaxies and the vast distances that separate them, when we consider how exactly everything had to be just so without even one atom's difference to produce us and our habitable planet, then it seems. . . more superstitious to believe it is all a meaningless accident than to believe in intelligent design and an intelligent designer."

According to Reese, "There is evidence of a caring God. [Our planet] has everything we need. It is beautiful. It was not created by God with either killing fields or Auschwitzes. If we defile and despoil it, that's not God's fault."

Reese added: "I prefer mystery and God to materialistic dogma wearing the false mantle of science. Wiser men than I have observed that if there indeed is no God, then anything goes and everything is pointless."

In my view creationism is a legitimate point of view, but it does not belong in natural or physical science classes; rather, it should be taught in history, literature, religion, and philosophy of science classes. This is because creationists use scientific data to buttress the theological and philosophical propositions that God, a Supreme Being, exists in objective, extramental reality, and that He created humanity and the universe in which we live.

Creationists are admirable and well-intentioned; they seek to demonstrate that there is order, meaning, and purpose in the universe, and that there is something sacred about human beings and the world in which we live. The problem with creationism is that physical science, because of its own limitations and restrictions, simply cannot deal with God and creation. When scientists either affirm or negate the objective reality of God and creation, they step outside their field of expertise and enter different, though no less intellectually respectable and defensible, branches of knowledge, namely, theology and the philosophy of science.

Scientists as scientists are concerned solely with descriptive reality and empirically verifiable phenomena; they use the techniques of the laboratory to seek truth and knowledge of external reality. We simply cannot and must not supply theological and philosophical answers to scientific questions, even as we cannot and must not provide scientific answers to philosophical and theological questions.

Perhaps our schools can incorporate into their physical science classes a two-week examination of the philosophy of science so that creationism may be legitimately discussed.

Editor's Note: The intelligent design versus evolution debate is heating up. While we are not quite seeing a repeat of the Scopes trial fight of last century, there are serious issues of authority, societal religious norms, church-state separation, and the nature of inspiration at play. Look for more articles on this in the coming months.
___________________________