Faith in the Workplace 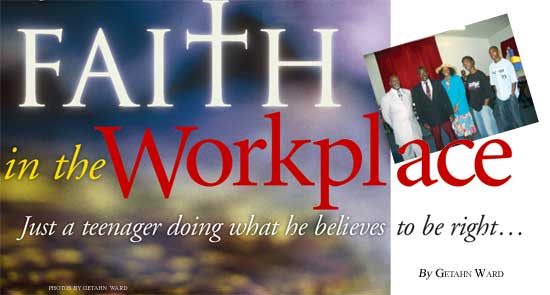 In a lot of ways, Terrence McGarr is your average teenager transitioning into young adulthood. He loves music and sports and is working two jobs as he prepares to start college this fall.

But growing up in a home where the religious belief forbids certain kinds of work between sunset on Friday to sunset on Saturday also makes him different. It meant missing out on the Friday night lights as a member of his Nashville high school's football team. And according to a complaint filed by the Equal Opportunity Employment Commission, it cost McGarr his job.

Seafood restaurant chain Captain D's LLC stands accused of violating civil rights laws for firing McGarr after he declined to show up for work at 5 p.m. on New Year's Eve in 2005. McGarr claims that managers at the location where he had worked as a crew member knew he couldn't report to work before 6 p.m. when they hired him. But Nashville, Tennessee-based Captain D's counters that McGarr didn't ask for reasonable accommodation of his alleged religious beliefs as required by law and that the company would have faced a hardship in accommodating them.

The case playing out in Nashville federal court is among a growing number that allege discrimination on religious grounds that the EEOC has taken up. Last year, 2,541 cases were filed, up 8.6 percent from 2005 and up 83 percent from 15 years ago.

Christine Saah Nazer, a spokeswoman with the EEOC, said more religious diversity in the workplace nationwide, especially because of a growing immigrant population, is probably the key driver of the increase in religious bias filings. "As more people bring religion into the workplace, employers are dealing with religious accommodation issues more frequently," Nazer said.

One of the biggest spikes have been in alleged employment discrimination against Muslims, Arabs, and people of or that are perceived to be of Middle Eastern descent. That has been part of a backlash that has seen more than 1,000 such charges filed in the aftermath of the terrorist attacks of September 11, 2001.

Todd McFarland, associate general counsel for the General Conference of Seventh-day Adventists in Silver Spring, Maryland, said that he is aware of up to 20 cases that are currently in litigation that involve members of the Adventist church that lost their jobs because they couldn't work on the Sabbath. "We're moving to a 24/7 society and there's more hostility now toward religion for various reasons than it had been in the past," McFarland said.

McGarr's case has to do with a requirement that employers accommodate religious beliefs of workers except to the extent doing so would create an undue hardship. That could include if it would cost the employer more than an insignificant amount of money or if it places a substantial burden on other workers.

Robert Covington, a recently retired Vanderbilt University law professor, said a 1977 Supreme Court ruling in a case that involved Trans World Airlines and an employee who because of his faith couldn't work from sunset on Friday to sunset Saturday made it difficult for workers claiming discrimination to win such cases. "The idea is a reasonable accommodation is one that's not absolutely cost-free but very low-cost to the employer," he said.

Kevin Sharp, an attorney with law firm Drescher & Sharp, P.C., in Nashville, who represents plaintiffs in similar cases, doesn't believe the bar for what constitutes undue hardship is that low.

Sharp questioned whether Captain D's exhausted reasonable alternatives for accommodating McGarr's beliefs, including scheduling employees in a way such that overtime pay wouldn't be required to cover the hours that he wasn't available to work.

McGarr said during his first three months at the restaurant, managers didn't schedule him to work before 6 p.m. on Saturdays, something that experts said if proven could make Captain D's claim of hardship from accommodating his beliefs less credible.

"They knew 100 percent, and would even tease me about my religion," McGarr said about his supervisors, countering Captain D's statement that it wasn't clearly aware of his beliefs.

Growing up in Nashville, McGarr remembers learning at an early age about values of hard work and honoring the Sabbath.

Lessons his father, Delmas McGarr, a masonry contractor, taught his five sons included never to sit down while on the job, said Terrence, now 19. "It shows you're not committed to the job," he said. "There's always something to do on the job."

The family attends Sabbath Day Church of God in Christ in Nashville, an independent church whose members, similar to Seventh-day Adventists, observe sundown Friday to sundown Saturday as a time for worship and rest from work toward making a living.

On many Saturday mornings, the younger McGarr can be found playing the drums during services at Sabbath Day. He hopes to start college this fall, majoring in the recording industry with plans to become a music producer. His dedication to observing the Sabbath is evident in the design of the schedule for his two current jobs—with a restaurant and in the electronics department of a retailer—such that he doesn't work on the seventh day.

McGarr knows a lot about such sacrifices. In his junior year at Maplewood High School, the wide receiver/cornerback on the school's team played junior varsity football Tuesday nights but sat out of the games on Friday nights because of the timing.

"It made me question myself—why am I playing football?" McGarr recalled. "I know it was something I wanted to do, but I wasn't able to do it like everybody else. Even though I sometimes feel like I missed out on a lot because of that, at other times I feel like maybe that was the way it was supposed to go for me."

Most cases such as the EEOC complaint involving McGarr are settled or resolved before going to trial. About 10.2 percent of the 2,541 charges of religious discrimination received by the EEOC last year resulted in a settlement with about $5.7 million in monetary benefits obtained for those that filed the charges and other aggrieved individuals. Overall, the EEOC concluded in 64 percent of instances that no discrimination had occurred, although the accusers could still file a lawsuit with the courts.

In its response to the EEOC's lawsuit, Captain D's said that McGarr failed to take advantage of opportunities that it offers to prevent and correct any discriminatory conduct. It said that the matter should be heard by an arbitrator according to terms of an agreement between McGarr and the company. It's unclear when that agreement was entered, but companies have been known to include language in employee handbooks to protect themselves from future lawsuits. Whether that agreement is enforceable would depend on reasonableness of circumstances when it was entered, said Covington, the retired law professor.

If Captain D's wants to initiate arbitration proceedings, it could file a motion to dismiss the case and to force arbitration, said Sharp, the lawyer with Drescher & Sharp, P.C., in Nashville.

Ronald Roberts, a spokesman with Captain D's, declined to comment on the case, as did Sally Ramsey, the EEOC's lawyer.

The EEOC complaint seeks monetary and other damages for McGarr. He's looking forward to that, but also is hoping that the outcome sends a message to Captain D's. "Hopefully they won't do anybody else like that that's keeping the Sabbath."

Getahn Ward is a freelance writer based in Nashville, Tennessee.