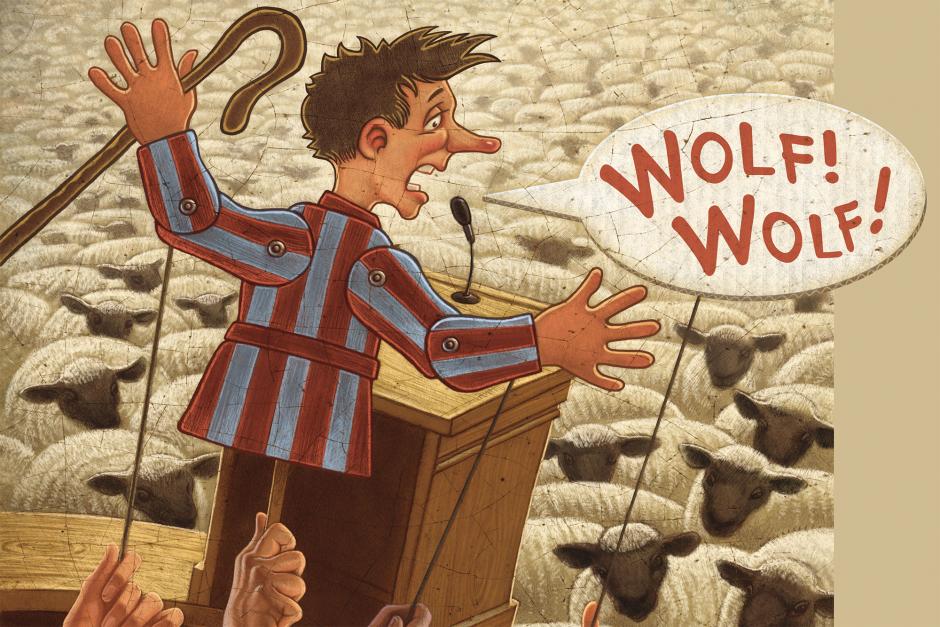 Crying “Wolf!” is a tactic used by alarmists on both sides of today’s religious and political spectrums. Perhaps this has always been so, as alarm and the perception of imminent danger are often the best ways to energize activists of any kind for the achievement of a specific goal. Peruse publications—online and otherwise—from opposite ends of either the religious or secular political continuum these days, and one understands what I’m saying.

But when it comes to issues of religious freedom, I suggest that peril of the false alarm can be significantly greater than in other settings. For starters, speaking strictly as a Christian with a Bible-directed moral compass, I have an exceedingly hard time distinguishing exaggeration from outright falsehood. Honesty is not simply the best policy for one adhering to classic Christian principles; it’s the only acceptable policy. What is more, when it is found that the facts of a particular situation don’t measure up to the alarm sounded, the credibility of religious liberty advocates suffers both with legal and civil authorities as well as devout religionists, who prize integrity above all else in their dealings with others, be they inside or outside the faith community.

With these principles in mind, it behooves us to examine two recent cases of undue alarm relative to the continuing tensions between the struggle for gay rights in American society and the struggle by religious conservatives to safely practice the principles of their faith so far as marriage and sexuality issues are concerned.

In October of 2014 headlines flashed across the country and around the world that a group of pastors in Houston, Texas, had had subpoenas served on them for the purpose of obtaining copies of some of their recent sermons.1 The very suggestion of government officials inspecting pulpit pronouncements of any kind evoked outrage, including forecasts of pending persecution, from religious conservatives and their political allies.2 As this was a case involving conservative religious protest against a gay rights ordinance, the notion was further enhanced in certain circles that a rising secularist tide is presumably threatening to halt the proclamation by Christians and others of traditional moral prohibitions—like those in the Bible—directed at homosexual practice.

But a closer look at the facts offers serious caution to those pushing the religious freedom “panic button,” so far as this incident is concerned.

For starters, what should be noted up front is that whatever legal justification there may have been for the subpoenas, both ends of the political spectrum were soon in agreement that the subpoenas had overreached in their demand for the sermons of these particular pastors. Even Mayor Annise Parker, herself an open lesbian and a strong supporter of the ordinance forbidding discrimination against LGBTs, agreed the subpoenas had gone too far.3 Soon thereafter Dr. Welton Gaddy, president of the Interfaith Alliance and a strong proponent of both LGBT rights and religious liberty in general, penned a letter both to Mayor Parker and City Attorney David Feldman, declaring:

“I will work as hard to defend the freedom of speech from the pulpit for those with whom I disagree, as I will to defend the rights of the LGBT community. As long as a sermon is not inciting violence, the government has no business getting involved in the content of ministers’ sermons.”4

But while the overreach of the subpoenas in this case is an agreed-upon fact by both sides in the controversy, certain points need to be kept in focus by religious liberty advocates. First, a bit of background would be helpful. The uproar in question began because a coalition of conservative Christians had launched an effort to repeal the gay rights measure in question, otherwise called the Houston Equal Rights Ordinance (HERO). City officials subsequently raised issues regarding the legitimacy of the petitions gathered by this group for the purpose of placing a repeal amendment on the ballot to be considered by the voters. In the course of the dispute that followed, the religious group favoring the amendment filed a lawsuit against the city of Houston. The city’s attorneys subsequently responded—in a manner typical of the discovery process such proceedings entail—with broad requests for documents relevant to the issue, which included sermons and speeches by religious leaders promoting the petition drive.

The point to bear in mind is that such initiatives by lawyers are standard procedure in the discovery phase of any case such as this, even if—in this situation—they were excessive. To interpret these actions as part of a deliberate, orchestrated effort to silence religious conservatives so far as the gay rights issue is concerned is not warranted by the actions of the attorneys issuing these subpoenas.

Second, it is important to remember that when religious people enter the secular political process, they inevitably expose themselves to its slings and arrows. This means that if an electoral initiative appears legally questionable to the civil authorities overseeing the democratic process, challenges to the particulars of such an effort will justifiably follow. Such challenges are not necessarily an attack on religious freedom, provided the rules of engagement are applied equally to all election participants.

A similar false alarm regarding conservative religion and LGBT issues arose recently in the city of Coeur d’Alene, Idaho, in which a makeshift wedding chapel owned by ministers Donald and Evelyn Knapp was allegedly being constrained because of the recent striking down of Idaho’s same-sex marriage ban, to allow the performance of same-sex weddings on its premises Some reports in the right wing press even alleged that the pastoral couple faced jailtime for refusing to allow gay weddings in their facility,5 and at least one such report claimed the couple had actually been arrested for this refusal.6

But closer scrutiny gives just cause for believing this entire controversy has been fabricated by Religious Right activists, with culpability extending to such prominent conservative politicians and preachers as Mike Huckabee, Rick Santorum, and Pat Robertson.7 Reading the reports from various sources across the spectrum, one thing seems clear: somebody’s lying.

The Alliance Defending Freedom, a Religious Right organization that has even defended life imprisonment for gay people,8 has filed a lawsuit in defense of the pastors’ right not to conform to the city of Coeur d’Alene’s anti-discrimination ordinance.9 The suit bears primary responsibility for spreading the claim noted above—that the Knapps have supposedly been threatened with fines and prison for their religious convictions. Yet Keith Erickson, a spokesman for the city of Coeur d’Alene, has insisted in response to inquiries regarding the case: “We have never threatened to jail them [the Knapps], or take legal action of any kind.”10 Such a statement obviously opens the city authorities to major negative consequences if in fact such threats and actions have been undertaken by the authorities in question.

The bottom line of the whole affair, so simple it is frankly embarrassing for those who have agitated the issue, is that the Knapps would have been spared any controversy whatsoever with civil authorities had they licensed their business in the first place as a strictly religious corporation. Apparently they figured this out in the midst of the controversy, and thus filed to alter the status of their business so as to make it strictly religious in nature, and thus exempt from the anti-discrimination statute in question.11 In light of this, the city of Coeur d’Alene has asked the Knapps and their national supporters to withdraw the lawsuit.12

Even the usually liberal American Civil Liberties Union has officially announced that because of the altered status of the Knapps’ business, the city ordinance forbidding discrimination against LGBT people does not, after all, apply to the Hitching Post Wedding Chapel.13

It would seem, in conclusion, that in the cases of both Houston and Coeur d’Alene, following established legal guidelines for electoral participation and the status of religious businesses would have likely forestalled either incident from happening altogether. If religious people are going to participate in the secular political process, if they wish their choices and interaction with others to be governed strictly by their religious convictions—even when the latter clash with societal standards of one sort or another—they must adhere to those rules that keep church and state separate.

Unfortunately, too many Christian and other religious conservatives forget that the separation of church and state—the cornerstone of religious freedom for all—is a two-way street. Not only does this principle protect the church from the state; it also protects the state from the church. Those now complaining of threats to their right to perform only those marriages consistent with their faith have crusaded vigorously in recent decades for legal disallowance of those marriages and various other consensual choices that contradict their faith—efforts that breach the wall between church and state in the direction of what can fairly be called theocracy. The same holds true in the case of Religious Right support for Ten Command­ments monuments in civic settings and organized prayer in public schools, as such actions invariably place the body politic in support of certain religious principles as distinct from others.

What is more, as a conservative Christian pastor holding to supreme biblical authority in moral and spiritual matters, I not only seek and support the right of religious people to promote and practice traditional morality without civil interference; I maintain with equally strong conviction the necessity of Bible-believing Christians to practice strict honesty in their communication of news and perceived threats to liberty. I find myself deeply troubled when Christians play fast and loose with the facts of a particular situation, especially when such actions give evidence of seeking more to stoke the fears and financial generosity of ideological constituents than to correctly represent what in fact is taking place. Issuing false alarms might generate donations and greater involvement in a given effort, but falsehood of any kind remains fundamentally hostile to the very biblical values conservative Christians profess to honor.

In sum, true liberty must protect both the right to freely adhere to religious tenets and the right to freely deny them. The problem with the Religious Right’s current campaign for religious liberty is that it comes across to too many—and rightly so, I think—as a defense of freedom solely for persons who think and act as they do, not freedom for those who differ.