The court responded with a ruling that extended the First Amendment guarantees to individual states, courtesy of the due process provisions of the fourteenth Amendment. Since the First Amendment also guards against religious totalitarianism, the court's Gitlow reasoning crafted the framework for a century of religious liberty tests: flag salutes, prayers, religious symbols on public property, and the restraint of trade, compliments of Sunday blue laws.

A month after the nine justices ruled in Gitlow, the Dayton, Tennessee, Scopes trial offered a sensational hint of things to come. In a case rigged to draw attention to a rural town coping with economic transition, John Scopes, a likable high school substitute biology teacher and a hand-picked party in interest, fronted the challenge to a state's power to bar evolutionism from public school curricula. 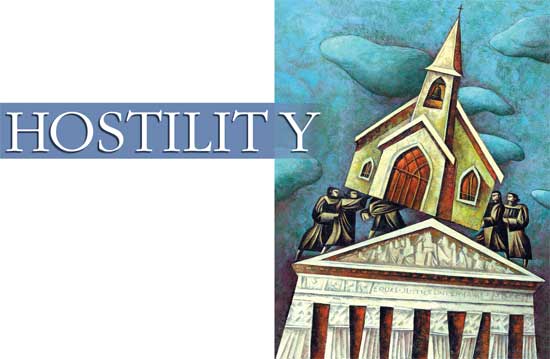 Those were the days when a defendant faced an all-male jury and the judge invited a clergyman to use the courtroom as a pulpit to invoke God's blessing on the trial. Despite Clarence Darrow's passionate argument for academic freedom, the judge fined the defendant $100. Later appealed and remanded on a technicality, the legal proceedings faded away while the cultural ripple effects continue to reverberate.

No question about it, prior to 1925 the full impact of the First Amendment's "establishment" and "free exercise" clauses had yet to be seriously tested in state courts.

Historically, expression of reverence toward and belief in God pervades government's institutional language, inextricably commingled in the nation's legal documents. The Declaration of Independence laid the cornerstone for democracy by saluting Divinity, embracing the belief that "all men are created equal" and "are endowed by their Creator with certain unalienable rights." (Still struggling to break free from the heel of a European imperial power, the high-sounding phraseology overlooked the reality of the time when slaves were bound in chains and women couldn't vote.)

The new nation's first president anchored his April 30, 1789, Inaugural Address expressing homage to "the benign parent of the human race," identified as "the Great Author of every public and private good." George Washington embraced "fervent supplications to that Almighty Being who rules over the Universe, who presides in the Councils of Nations, and whose providential aids can supply every human defect."

Current political leaders on the public payroll unabashedly tack on signatory phrases such as "God bless America" in messages to voters. Senators and Congressmen never hesitate to add their voices to the harmonious rendition of the song of the same name. President John F. Kennedy once advised his audience: "God's work must truly be our own." George W. Bush consistently laces presidential pronouncements with declarations of allegiance to God.

God is acknowledged in all 50 state constitutions-typically in the preamble. The three earliest date from 1776.

Maryland and Pennsylvania share the phrase "grateful to Almighty God for our civil and religious liberty," with Pennsylvania adding, "and humbly invoking His guidance." Virginia invokes "Religion, or the Duty which we owe our Creator" and admonishes "it is the mutual duty of all to practice Christian Forbearance, Love and Charity towards each other"

An American majority embrace a belief in God. The persistent challenge is to discover how best to fine-tune this cultural reality without running afoul of the establishment prohibition or the free exercise assurance, which, taken together, expect the government to be nonsectarian, neutral but not hostile to religion.

Establishment and free exercise clauses are twin protections, bound tightly as a single package. Interpretation of either with a blind eye to the other throws the equation out of balance and can lead to an extremist position. A "one note Charlie" case that fights establishment while ignoring or trampling free exercise risks jeopardizing the delicate balance envisioned between the twin mandates.

The First Amendment appears to require government neutrality in its protection of religious practice. State-sponsored neutrality shouldn't accommodate hostility that attempts to remove reference to God from the legal landscape.

Has establishment concern dominated legal perceptions since Gitlow, leaving free exercise with the short stick? To avoid state-sponsored religion, has the pendulum swung so far as to inadvertently ignore free exercise? Is there a clear and present danger that, pushed to the nth degree, solo establishment can open the door to an established

secular humanism, with a government hostile to faith-based religion?

So what about the Ten Commandments in the public arena?

Is a state law that orders "Don't kill a human being" unconstitutional because it paraphrases "Thou shalt not kill"? How about a civil prohibition penalizing theft: "Don't steal property from another"? Does it sound suspiciously similar to "Thou shalt not steal"?

If a paraphrase of one of the Big Ten passes Constitutional muster, would a literal English translation such as "Thou shall not kill" make the grade irrespective of its Mount Sinai connection?

Astride the grand entry to the United States Supreme Court Building in Washington, D.C., a sculpted Moses, cradling the Ten Commandments, greets all comers-even those intent on removing religious symbols from public property. Inside, massive oak doors carry engraved artistic renderings honoring the biblically based law. In silent testimony, yet another depiction of the Biblical Ten is carved into the wall, directly above the bench where the nine justices grill lawyers.

Are symbolic replicas of the Ten Commandments, the cross, or the Star of David anything more than representations of freely exercised faith?

When the chief justice administers the oath of office, the U.S. president-elect places his hand on a Bible containing the Genesis account of creation week as well as events descriptive of the origin of the Ten Commandments at Sinai. Trial witnesses promise fidelity to the "truth" through a court-administered oath, typically capped with the words "so help me God." An embossed visage of Moses gazes down from the walls of the U.S. House of Representatives, inspiring legislators. Both the United States Senate and the House of Representatives employ clergy empowered to open congressional sessions by publicly inviting
God's blessing.

Chaplains of all faiths serve as commissioned officers in the United States military, paid with tax money appropriated by Congress. Government-issued religious symbols, pinned to uniform lapels, identify chaplains-crosses for Christian clergy and appropriate symbols for other faiths. Military base chapels, some adorned with religious symbols, are built on federal land, at taxpayer expense. American coinage proclaims: "In God We Trust."

Must this be swept away as unconstitutional establishment?

Government action respecting and protecting symbolic foundations of faith doesn't remotely imply that citizens can be coerced to worship any shrine, bow down to any deity, or swear allegiance to any sectarian dogma. The United States stands as a nonsectarian protector of a citizen's free exercise, whether creationist, secular evolutionist, atheist, agnostic, Jew, Muslim, or Christian.

An acknowledged evolutionist has declared, "Evolution is a religion. This was true of evolution in the beginning and it is true of evolution today." Political action organizations devote considerable energy attempting to establish this secular "religion" by imposing its dogma on dissenters. Are Ten Commandment replicas second-class religious symbols that deserve less constitutional protection than evolutionism?

Americans who lost their lives in the June 1944 Normandy Invasion rest memorialized in a military cemetery overlooking the once blood-soaked sands of Omaha Beach. Glistening white crosses mark Christian graves. Stars of David guard the honored dead of the Jewish tradition.

A previous generation of patriotic citizens, mourning the loss of local Americans killed in World War I, invested time, money, and material to plant a memorial cross in the Mojave Desert's rough terrain in 1934. This act of spontaneous gratitude saluting the fallen of a brutal conflict alleged to be a "war to end all wars" and "to make the world safe for democracy" involved not a penny of tax money. Far from the 18-wheelers that cruise Interstate 15 connecting Los Angeles and Las Vegas, the remote site attracted Easter sunrise celebrants.

No eyebrows were raised for the better part of the twentieth century. But once the turf supporting the memorial became public land, legal vigilantes, flying the First Amendment flag, galloped to the scene charging establishment. Pushing the envelope toward the supremacy of the establishment clause, the federal court ordered the Latin cross removed.

Make no mistake, union of church and state threatens individual freedom and offers not a whit of refuge to religious liberty.

Tyranny flows from a totalitarian state controlled by a majoritarian faith that suppresses and even persecutes dissenters-shades of the "rack and screw" tortures of medieval Europe or the excesses of the Taliban. Spirituality will be compromised, if not persecuted, where religious practice exists at the state's whim-witness Christian survivors of Soviet gulags; surreptitiously scribbled symbols of a cross or a fish on Roman walls, and the hideaway haunts of catacombs.

Now that the Mojave Desert memorial cannot stand, must the simple crosses on tax-supported highway shoulders memorializing highway deaths be uprooted? Would it be constitutionally rational to raze the Normandy cemetery crosses under the establishment banner? Or will there be a demand, in the Taliban tradition, to deface the figure of Moses gracing the Supreme Court architecture and to chip away the Big Ten symbol cradled in his arms?

It won't happen as long as the legal pendulum avoids swinging far past the neutrality norms of establishment extremes, and instead balances the twin-blessing package of free exercise and establishment within the magical formula demanded by the First Amendment.