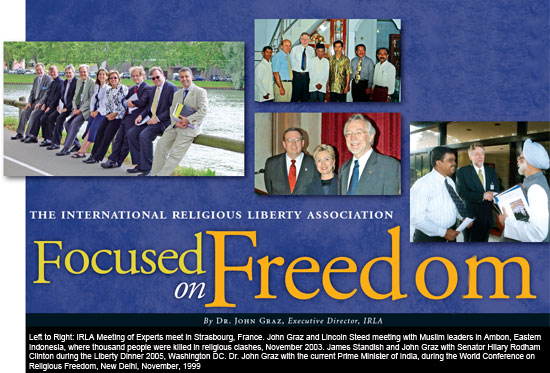 It has taken centuries for a true recognition of the fact that religious freedom is a fundamental freedom and a basic human right. The Universal Declaration of Human Rights was written and adopted by acclamation by the United Nations in 1948, after the tragedy of World War II. Article 18 gives one of the best definitions of religious freedom we have ever had.

"Everyone has the right to freedom of thought, conscience and religion; this right includes freedom to change his religion or belief, and freedom, either alone or in community with others and in public or private, to manifest his religion or belief in teaching, practice, worship and observance."

The World Council of Churches, and then Vatican II, underlined the importance of that right. This was major progress. As Professor James E. Wood, Jr., writes: "In the history of Christianity, as among other religions of the world, tolerance has not come easily. Tolerance toward other religions was generally deplored because it was viewed as being rooted in religious apathy and indifference."

Most religious liberty associations or organizations originated since that 1948 statement was written. The International Religious Liberty Association was chartered not in 1948 or in 1963, but in 1893. That was 114 years ago! The IRLA is the oldest association defending religious freedom for all.

The IRLA was a successor of the National Religious Liberty Association. Both associations were organized by Seventh-day Adventist leaders to oppose legislation that might restrict religious freedom. They were particularly concerned about Sunday laws. The association published a biweekly magazine, which in 1905 became Liberty magazine. In 1948 the IRLA opened its membership to anyone who wanted to defend and promote religious freedom. Protestants and Catholics, Baptists and Adventists, Jews and Muslims, Hindus and Buddhists are all associated with the IRLA, and seek to defend and promote religious freedom for all. 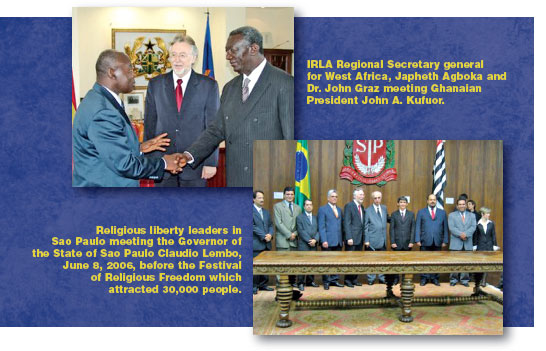 A European branch of the IRLA was organized in 1948 and has been a partner association for many years, publishing one of the most respected journals on religious freedom, Conscience et Liberte, in French and six other European languages.

If you read the list of members of the board of the IRLA or members of honor, you will find the names Mrs. Roselyn Carter, Dr. Albert Schweitzer, and other names you would recognize. Associated with the IRLA were Eleanor Roosevelt and Rene Casing, who both played an essential role in editing the Universal Declaration of Human Rights.

Philosophy of the IRLA
The roots of the Human Rights Declaration go back to the philosophers of the enlightenment such as John Locke and Voltaire. They also go back to the Bible, to the teaching of Jesus; and to the Anabaptists and Baptists. That is why the Declaration of Principles of the IRLA states: "We believe that religious freedom is a God-given right."

From its beginning, the International Religious Liberty Association has understood religious freedom in a very broad sense. We are proud of our religious roots, but we are also grateful for the contribution of other traditions. We recognize the contribution of both religion and philosophy in the legislation that protects the right to choose according to the dictates of conscience. We also recognize that in most of the cultures and religions in the world, seeds of religious freedom can be found. It began with the struggle of tolerance for others' religion. It was not religious freedom as defined by the Universal Declaration, but it was still a good step forward.

Professor Wood writes: "In the ancient teachings of Hinduism, for example, intolerance and the very denigration of the religious rights of other faiths are expressly condemned."

In Islam, the Qur