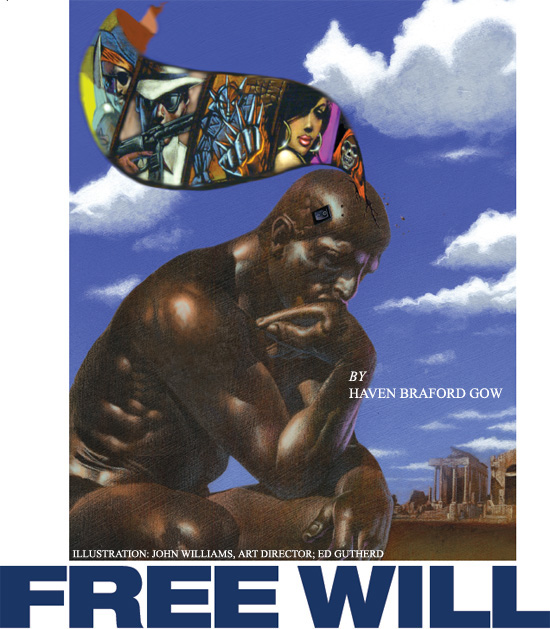 Implicit in Professor Smith's philosophy of freedom is the view that human beings are qualitatively different from mere animals and the rest of physical nature. In his book The Difference of Man and the Difference It Makes (Fordham University Press), the eminent American scholar Dr. Mortimer Adler argues that humans differ from animals because they possess the inherent capacity to reason, concep_tualize, utilize and comprehend symbols, and engage in prepositional speech. And, as Dr. Adler insists in his two-volume work The Idea of Freedom, humans possess the inherent capacity to make free choices and judgments.

By freedom of the will, Dr. Adler means the natural freedom of self-determination! A freedom that is possessed by all men, by virtue of a power inherent in human nature, whereby man is able to transform his own character creatively by deciding for himself what he will become or do. In this sense, man's choices are self-caused and are not determined by processes beyond his control.

One of the most important questions that moralists, psychologists, philosophers, and theologians must deal with is the issue of freedom of the will: that is, are our thoughts and actions freely chosen, or are they in fact determined by processes outside of our control? If our thoughts and deeds are freely selected, then we may be held morally and legally accountable for our actions.

Dr. Cornelius Plantinga, Jr., a prominent theologian and author at Calvin College, Grand Rapids, Michigan, provided this response: "Human beings have been endowed by their Creator with moral responsibility that depends upon a further endowment, significant freedom of the will. . . . If nothing happens to interfere with these features a person will always have them: moral responsibility that is predicated upon significant freedom of the will. . . . But can something interfere with the freedom upon which moral responsibility depends? Absolutely. A person might become mentally ill and not be able to stop himself from flying into uncontrollable rages and slandering everybody he can think of. A person might be captured by an enemy terror_ist group and successfully brainwashed in such a way that a person's thinking about love and hate, for example, gets all turned around."

The author of several fine works and a professor of philosophy at Boston College, Dr. Peter Kreeft provided this answer: "Already, without drugs, I can remove your free will by an ax applied to the center of the brain, or effective hypnosis. That drugs can alter character and remove free will does not disprove free will; it assumes it, as theft assumes wealth and dieting assumes fat."

James Likoudis, a historian and president emeritus of Catholics United for the Faith, furnished this reaction: "All who have acknowledged the existence of free will as a constituent aspect of the spirituality of the human person have acknowledged that the moral freedom of the person may be so lessened by other factors (conscious or unconscious) that there may be no or little culpability of moral guilt for the committance of an immoral or criminal act or bizarre behavior. . . . However, the normal person, aware of his own mental life and striving to know himself amidst the complexity of motive-factors impinging on his human psyche, remains only too aware of the direct testimony of his consciousness; that with respect to many actions he does possess a real freedom of choice, or free will."

Dr. K. Hamdan, a psychiatrist with Delta Community Mental Health Services, Greenville, Mississippi, also provided an illuminating answer. According to Dr. Hamdan, after many years of counseling in the psychiatric profession, he has found no evidence to support the view that a person's freedom of will has been destroyed or impinged upon by genetic or biological factors. If a person engages in violent behavior, said Dr. Hamdan, it is not because of his genetic makeup or because he was "born that way." Instead, said Dr. Hamdan, people at a young age develop certain negative patterns of thought and behavior that reveal themselves in violent actions. He observed that if a child is constantly exposed to domestic violence, or continuously watches violent television programs and movies, he or she may be conditioned to respond violently to something or someone he encounters. People, insists Dr. Hamdan, have free will and are responsible for their behavior.

Haven Bradford Gow is a TV and radio commentator and writer who teaches religion to children at Sacred Heart Catholic Church in Greenville, Mississippi.