Free Will, Predestination, and Religious Liberty 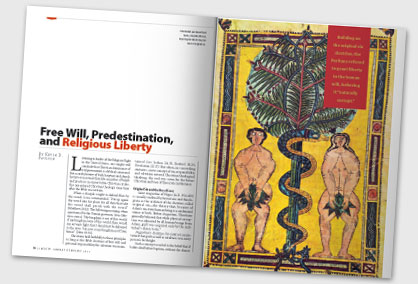 Listening to leaders of the Religious Right in the United States, one might well conclude that Christian dominance of civil government is a biblical command. But a careful review of both Scripture and church history soon reveals that, like a number of beliefs and practices in conservative Christian circles, this one entered Christian theology some time after the Bible was written.

When a disciple sought to defend Him by the sword, Jesus commanded, “Put up again thy sword into his place: for all they that take the sword shall perish with the sword” (Matthew 26:52). The following morning, when questioned by the Roman governor, Jesus likewise stated, “My kingdom is not of this world: if my kingdom were of this world, then would my servants fight, that I should not be delivered to the Jews: but now is my kingdom not from hence” (John 18:36).

Christians held faithfully to these principles so long as the Bible doctrine of free will and personal responsibility for salvation was maintained (see Joshua 24:15; Ezekiel 18:20; Revelation 22:17). But when, in succeeding centuries, a new concept of sin, responsibility, and salvation entered Christian theological thinking, the seed was sown for the future Christian embrace of theocratic intolerance.

Original Sin and the Use of Force
Saint Augustine of Hippo (A.D. 354-430) is usually credited by historians and theologians as the architect of the doctrine called original sin—the theory that, because of Adam’s sin, every human being is a condemned sinner at birth. Before Augustine, Christians generally believed that while physical corruption was inherited by all human beings from Adam, guilt was acquired only by the individual’s choice to sin.1

Augustine’s doctrine, by contrast, maintained that guilt as well as weakness was every person’s birthright.

Such a concept soon led to the belief that if babies died before baptism, without the chance to have original sin cleansed from their souls, they would go to hell.2 It also established the premise that because of man’s incurable depravity, force could rightly be used against heretics and sinners. Augustine, in his treatise titled The City of God, more clearly articulated this principle. In the words of historian Will Durant: “The Church would later accept this identification [of itself with the “City of God”] as an ideological weapon of politics, and would logically deduce from Augustine’s philosophy the doctrine of a theocratic state, in which the secular powers, derived from men, would be subordinate to the spiritual power held by the Church and derived from God.”3

Despite their rejection of many Catholic teachings, the magisterial Protestant Reformers, especially John Calvin, adhered strongly to Augustine’s view of human nature.4 Thus Calvin, like Augustine and medieval Catholicism, believed in the church’s dominance of civil government and the use of force against dissenters. Calvin’s consent to the burning of Michael Servetus in Geneva, an act praised by Catholics as well as Protestants, offers evidence in this regard.5

Predestination
For both Calvin and Augustine, the doctrine of involuntary sin made necessary a doctrine of involuntary salvation. Thus the theory of predestination was born. Certain ones would be predestined to be saved, while the others are predestined to be damned. Such a concept removes salvation entirely from the practical experience of humanity, since that experience is presumably—and inevitably, even for the converted Christian—tainted by original sin. In Calvin’s words: “Until we slough off this mortal body, there remains always in us much imperfection and infirmity, so that we always remain poor and wretched sinners in the presence of God. And, however much we ought day by day to increase and grow in God’s righteousness, there will never be plentitude or perfection while we live here.”6

The salvation of men and women is therefore not, according to this theology, a freedom from sin accomplished in this present life, but only a promise of such freedom and eternal bliss in the life to come.

Not all Protestants, of course, accepted the theology of Augustine and the magisterial Reformers. Those of the Arminian-Anabaptist tradition took a very different view of sin, guilt, and the use of force. Rejecting original sin, these groups insisted on adult baptism, and from them arose in time the Wesleyan movement in England, with its stress on victory over sin in this present life. Commenting on this branch of Protestantism, the historian Will Durant writes: “There is no clear filiation between the Continental Anabaptists and the English Quakers and the American Baptists; but the Quaker rejection of war and oaths, and the Baptist insistence on adult baptism probably stem from the same traditions of creed and conduct that in Switzerland, Germany, and Holland took Anabaptist forms. One quality nearly all these groups had in common—their willingness to bear peaceably with faiths other than their own.”7

The American Experience
Conflict between these two strains of Protestantism was inevitable, in the New World as in the Old. The English Puritans, being followers of Calvin,8 upheld the enforcement of church decrees by the state. Building on the original sin doctrine, the Puritans refused to grant liberty to the human will, believing it “naturally corrupt.” Speaking of the New England Puritans and their intolerance of dissent, one historian observes: “They contended that there were two types of liberty—natural (or corrupted) liberty and the ‘liberty wherewith Christ hath made us free.’ Liberty to practice error came under the former heading and was not really liberty at all, but license, the ‘liberty for men to destroy themselves.’”9

Little wonder that Roger Williams, of the Anabaptist tradition, was led to challenge this theocratic mind-set, which resulted in his banishment from Massachusetts. Williams would later observe that he would “rather live with “Christian savages” than “savage Christians.”10

As American history progressed, the ideas and methods employed by the Calvinist and Arminian branches of Protestantism grew more distinct one from the other. One recent historian, writing of abolitionist John Brown and the larger antislavery movement, draws this contrast between those influenced by the Second Great Awakening, largely an Arminian movement with its focus on human perfectability, and those (like Brown) from the Calvinist tradition:

“Drawing on the Christian humanitarianism and perfectionism unleashed by the revivalist Second Great Awakening, [William Lloyd] Garrison and the immediatists also renounced violence and stressed the efficacy of moral suasion, in the belief that saving the nation’s soul required transcending all forms of ungodly coercion.
“John Brown was never committed to moral suasion, nonviolence, or redemptive Christian humanitarianism. Born in Torrington, Connecticut, in 1800, and raised chiefly in Ohio, he was trained by his devout parents in the old Congregational Calvinism, with its adherence to predestination.”11

Free Will, Predestination, and Religious Liberty
Today’s Religious Right has followed faithfully in the footsteps of Calvinistic, Augustinian Christianity. In the statement “The Gospel of Jesus Christ: An Evangelical Celebration12—signed by most conservative Christian leaders in America at that time, including Jerry Falwell and Pat Robertson13—man’s universal condemnation “by nature” is affirmed,14 along with man’s salvation presumably being accomplished by divine decrees apart from a transformed life.15 Philip Yancey, one of the most popular evangelical authors today and a frequent critic of the Religious Right, nevertheless joins his fellow evangelicals in embracing the Calvinist view of sin, grace, and salvation. Regarding the achievement of righteousness by Christians here on earth, Yancey declares: “God’s grace is so great that we do not have to.”16 Elsewhere he writes: “It is our human destiny on earth to be imperfect, incomplete, weak, and mortal, and only by accepting that destiny can we escape the force of gravity and receive grace.”17 Though this is hardly the full-fledged predestination taught by Augustine, Calvin, and others, it nevertheless compromises both human freedom and biblical teaching by making people sinners apart from personal choice (see Ezekiel 18:20; Romans 5:12; James 1:14, 15; 4:17), and likewise denies the clear message of Scripture that through the exercise of the will blended with imparted divine strength, men and women can in fact rid their lives of sin (see John 8:11; Romans 8:4, 13; 2 Corinthians 7:1; Philippians 4:13; 1 Thessalonians 5:23; 1 Peter 2:21, 22; 4:1; 1 John 1:9; 3:2, 3, 7; Jude 24; Revelation 3:21; 14:5).

What is clear from church history is that one’s belief about free will and its capacity, in cooperation with God, to choose between righteousness and sin has much to do with how one respects, and allows for, the exercise of the will by others. If men and women are viewed as incapacitated by sin against their will, unable except by divine edict to achieve salvation, the next logical step is to disregard and suppress free will in one’s efforts to cleanse society of evil. If, however, one holds that God’s tolerance of evil throughout history gives evidence of His respect for freedom, and that through the exercise of this freedom one can—through divine aid—obey God and eschew evil, it is equally logical, in matters of private moral and spiritual judgment, to leave the choice between good and evil to the individual.
The Bible clearly upholds obedience to God’s moral law as the condition for receiving eternal life (Matthew 19:17; Luke 10:25-28). But the same Bible is equally clear that God gave to human beings, in the very beginning, a free choice between righteousness and sin. It was God Himself, according to the Bible story, who placed in Eden both the tree of life and the tree of the knowledge of good and evil (Genesis 2:9). And at the very close of Scripture the invitation is offered: “Whosoever will, let him take the water of life freely” (Revelation 22:17). The record of history is clear that whenever the church divorces free will from sin and salvation, the ultimate casualty is freedom itself.