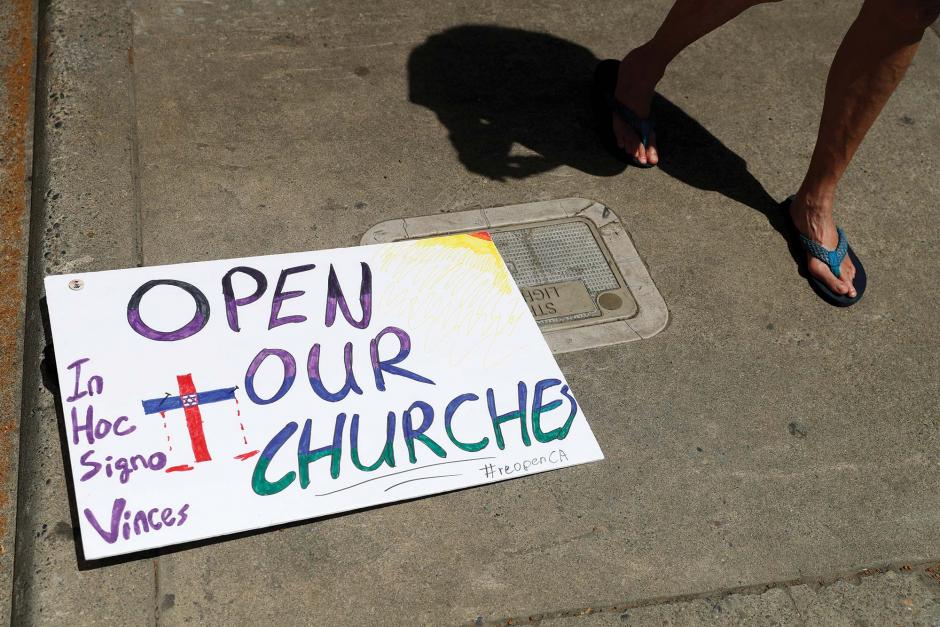 On May 1, 2020, my wife and I flew to Sacramento, California, to pray for our state and to demonstrate our right to peaceably assemble and stand up for what we knew was an abomination to God. Nearly 2,000 others joined us in a peaceful patriotic assembly on the steps and the lawn of our state capitol. Many carried posters or flags, and we took a backpack of food, water, and sunscreen, since we anticipated a day with no provisions otherwise.

In California the churches, parks, beaches, restaurants, sports arenas, stadiums, theme parks, concerts, and all other gathering places had been shut down, with no plans to open them in the near future. On Passover, during Holy Week, and even on Easter (Resurrection) Sunday there were no gatherings of God’s people anywhere close to where I lived, with the exception of the pop-up, drive-in church my wife and I had started in an office parking lot four weeks earlier. As a result of the unprecedented church closings and my witnessing of the lack of pastors willing to stand up to their First Amendment rights, my call as an ordained pastor had been shaken to the core. Under the guise of protecting of our physical health, the government, without due process, closed down our houses of worship, and only the faithful who knew how to use a computer and had Internet in their homes, and knew how to link together, met virtually. (Had my parents been alive, they would have been excluded, since they had no computer skills and thus had no Internet in their home.) It troubled me greatly to think about how many seniors must have been, and are being, excluded from the churches they’ve spent their lives building.
So on that first Sunday in May, while other states were starting to have church meetings and open their businesses, and after I heard my state’s governor, Gavin Newsom, announce that there would be no large gatherings until 2021, I was compelled, without a doubt, to go to Sacramento and let my voice be heard. After seven weeks of this lockdown and these tyrannical religious restrictions, I was compelled to attend this call of distress to support my constitutional right to gather and worship.
We had arrived at the capitol around 11:30 for the call to freedom, which was scheduled to begin at noon. There were a few Highway Patrol officers standing around, but nothing alarming or unexpected. Imagine everyone’s shock when during the next 30 minutes more and more officers kept arriving as they lined up circling the entire property of the capitol. By 12:30 there were hundreds of “guards,” California Highway Patrol officers who were fully armed and ready. Keep in mind that at no time was there anything alarming or violent. At no time was anyone doing anything inappropriate, unethical, or outside the law. The only thing people were doing was exercising their right to assemble.  .  .  .
My wife and I spent most of our time around the boat and around our friend, Leigh. She was the one who had invited us, and we felt a loyalty to her. We mingled around the group of people, venturing back and forth toward the front steps of the capitol. Since this was our first time doing anything like this, we also felt somewhat unsure about what was going on as tensions started to build as more and more armed guards appeared. There were lots and lots of young women and men with children, including babies in strollers, and several people came out toward us with a warning that the heat was rising, and they felt a need to move back.
Suddenly, around 1:00 p.m. the front doors of the capital burst open, and nearly 100 California Highway Patrol officers, in full riot gear, stormed out with batons in their hands and shields on their face, and powered toward the crowd as they created a human barricade. (They had obviously been practicing this maneuver for some time.) And this was the California Highway Patrol! This force was created to patrol the highways of California, not to protect the California capitol. What were they doing practicing crowd control and establishing riot protocol? I would have expected that to be the job of the Sacramento Police Department or the County Sheriff, not the Highway Patrol. Who was doing their job? Who was patrolling our highways? What were they doing with this kind of military-style training? . . .
For the next 30 to 45 minutes they pushed everyone off of the capitol steps and lawn, and took into custody nearly 40 people, including women and children, all for no apparent reason. By the time they were done, all who were left were standing on the sidewalk by Leigh’s boat. At this point in time the Highway Patrol commandeered by standing on a raised, flowerbed/wall. They stood there, on top of the wall, as a show of power and to prove that they were in control. I looked at my wife, and we both starting crying at this surreal experience in the “land of the free and the home of the brave.” . . .