Freedom of Expression and Religion 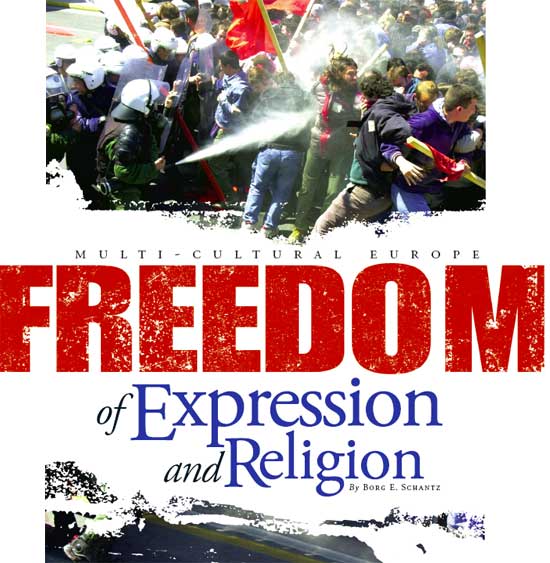 Twelve not very impressive drawings in Jyllands-Posten, a Danish newspaper, brought more trouble religiously, politically, and financially than any other event in Denmark's modern history. Some of the pictures depicted Muhammad in a derisive manner. The reaction of zealous Muslims did not take place until three months after their publications. A ban based on a far-fetched, strict interpretation of a few texts from the Koran and quotations from the Traditions (Hadith) on publishing pictures were brought out by some Muslims. Western laws on human rights and freedoms of expression were challenged.

It seems that some Muslims are looking for such opportunities. In England, Salman Rushdie's book The Satanic Verses was an issue; then Van Gogh in the Netherlands, director of the film Submission, was murdered. After a few months, Denmark, with the drawings in Jyllands-Posten, caused trouble. Later, the controversial lecture in Germany by Pope Benedict XVI was used to stir up the bones of contention.

Freedom of Expression, Press, and Speech.
These issues, especially the publication of the Muhammad caricatures, are still debated worldwide. The main issue is what does freedom of expression in any form mean and how should it be used.

The much appreciated Western concepts of freedom of speech, press, and expressions came about gradually after centuries of many people's struggles with governments and churches in Europe.

Today, however, this much appreciated freedom granted to all citizens is questioned by the recent influx of immigrants, from nations with strict religious laws and a low view on human rights.

Muslims claim that all kinds of pictures— not only caricatures of Muhammad—are severe blasphemous transgressions of their religion. The Jyllands-Posten pictures were especially regarded as a scorn, insult, ridicule, and derision to all Muslims as Muhammad was depicted as a terrorist. People who make pictures are, according to Islamic law, "punishable on the Day of Resurrection." These radical Muslims used the freedom of the press—absent in their countries—to fight the freedom of the press in Western lands. They not only demonstrated on the streets; they traveled to various Islamic nations to upset them. They also brought the cases to courts. The various Danish courts, however, have established that the drawings are neither an expression of blasphemy nor slander. In Danish law the freedom of expression is stated as follows:

"Anyone is entitled to in print, writing and speech to publish his or hers thoughts, yet under responsibility to the courts. Censorship and other preventive measures can never again be introduced."

In other words, freedom of speech means no advanced censorship.

The intensive worldwide debate on freedom has proven to have many hidden agendas and contradicting considerations. It has revealed interesting psychological and political purposes. The issues have from all sides to a great extent have been interpreted and misinterpreted.

Human Rights in Islam
In order to understand why Muslims—even in an area where they are in a minority—should make these claims, it must be stressed that for Muslims, culture is synonymous with religion. In Islam, religion is integrated into culture and customs in such a way that it is impossible to separate the two. In such societies freedom of expression has no place.

One result of this inseparability is that faithful Muslims generally have a hard time adjusting to life in non-Islamic cultures.

For that reason they felt that the caricatures, published under Western freedom of expression laws, are hurtful attacks on Muhammad and Islam. The prophet Muhammad is highly venerated. He is the most popular name on earth, the focus and essence of their religion. He has been granted a semi-divine status. In Islamic countries, mocking him means the death penalty.

Western constitutions and declarations on human rights, blasphemy, and even racism, gave the press freedom to publish the caricatures. And the same Western laws came in handy for Muslims as they could demonstrate freely and bring their cases to courts. This would never have been allowed in Islamic countries, with their statutes and application of Shari'ah law.

Still, there were about ten independent Islamic nations that on December 10, 1948, signed the United Nations Universal Declaration on Human Rights. During the following years, other Islamic nations followed. Article 18, signed by Muslim governments, reads as follows:

"Everyone has the right to freedom of thought, conscience and religion; this right includes freedom to change his religion or belief, and freedom, either alone or in community with others and in public or private, to manifest his religion or belief in teaching, practice, worship and observance."

This means that officially and in theory these freedom principles have been accepted by the more than 50 Muslim nations.

However, the "freedom" declaration is interpreted by many Muslims to mean that the right to freely practice Islam anywhere, also gives them the right to be protected from non-Islamic religious propaganda, and to deal with apostates from Islam according the Shari'ah law—namely, the death penalty.

The Effects of the Affair
Perhaps history will judge that the positive aftermaths of the whole affair will outweigh the immediate negative consequences. The debate has called moderate Muslims to the forefront and formed groups of liberal supporters that are attempting to suggest reforms in Islam so it can enter the twenty-first century. Non-Muslims have discovered the importance religion has for their Muslim neighbors, workmates, and fellow students, and they accept and respect that. Many nominal Christians in secular countries have discovered the importance of their Christian religion and its positive influence on modern societies. Even in some areas there has been a slight increase in church attendance.

However, many Muslims in our midst have found that laws and restrictions that are dictated by Islam should not be forced on and applied in non-Muslim areas.

Attempts to enforce Shari'ah law for Muslims living in Western democracies should definitely not be allowed. Religion in the West is a private matter. All amendments suggested to protect religions and persons from abuses by limiting aspects of freedom of expression should be very carefully and critically scrutinized. Such amendments from another time in history, in a new situation and different context, could in the hands of the wrong people be misinterpreted and used against established political parties or Christian churches.

Self-censorship, but not Self-defense?
The various laws guaranteeing freedom of expression, press, and human rights will probably not be changed, altered, or even adapted to local situations. On these premises rest our well-established rights to form political parties and religious traditions.

Media ownerships can decide what is published. Self-censorship in some cases can and should be practiced to avoid offences and stirringas up trouble. However, the actual reasons for applying self-censorship are very significant. Self-censorship as strict self-defense by artists, editors, authors to dodge personal harm could be regarded not only as cowardice but also a denial of a founding principle for a free society.

The same applies on the personal level in associations between people of different religions. Self-censorship is a valuable tool, not only to keep communication going, but also as a basic principle for coexistence in local society. However, in such situations it must be made clear what persons stand for, while at the same time respect is shown for the other person's religious convictions and practice.

Voltaire put it this way: I "do not agree with what you have to say, but I'll defend to the death your right to say it."

It is a duty for anyone to stand up for various human rights. These rights are not only the foundation of societies but also the cement that keep it together. Fundamentalists on all sides are generally hard to reason with. They will not accept that public peace is more important than personal convictions. They are always in a minority, but in Islam, they have great influence.

Human Rights in the Daily Lives
A Christian involved in the debate should always be prepared to stand up for the general principles of freedom that are guiding his or her country. Christians should also be prepared to accept that people have the right to expose their religion and special brand of Christianity to criticism, mockery, and ridicule. Such contention should be accepted with Christian grace.

Personal attacks have no place. But courteous dialogues on issues are in place. The persons who feel obliged—even dictated—to publicly fight for an introduction of foreign laws, cultures, and customs from his or her home country must understand that "when in Rome, do as Romans do." What one does in privacy is another matter. The whole process of standing on the treasured principles of human rights while at the same time respecting and accepting other people's differing viewpoints and attitudes requires skills where a good amount of wisdom, patience, tact, and courage are involved. It is really a question of finding the balance where on one side attempts are made to uphold the significant and cherished principles of human rights and freedom of expression, while on the other side efforts are made so that the exercise of this liberty does not unnecessarily infringe on people's right to religious liberty and upset people of other faith or convictions.

Dr. Borge Schantz writes from Bjaeverskove, Denmark. An educator, he has spent many years in the Middle East.