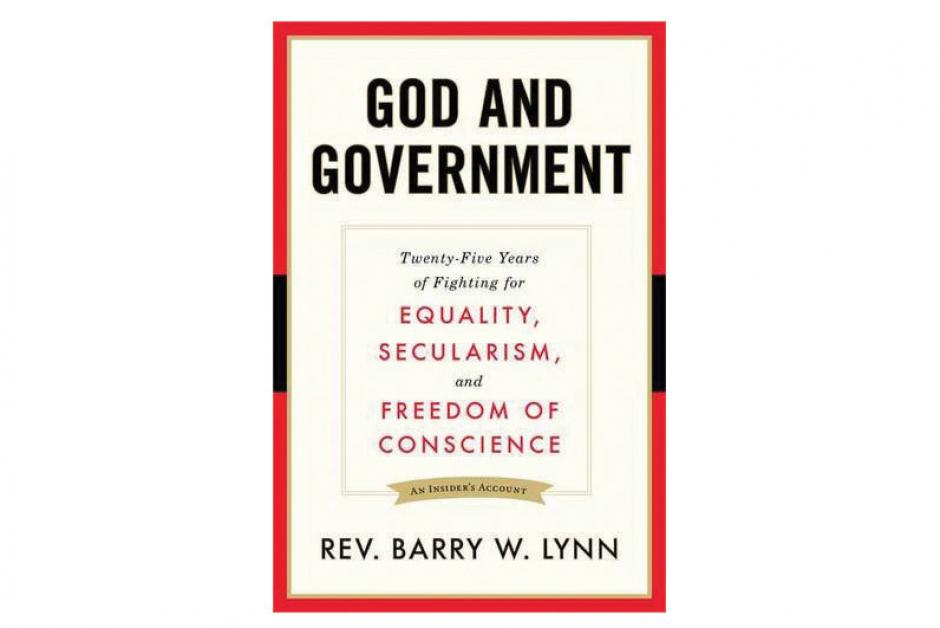 Anyone who knows him, or at least about him, will have a strong opinion about the Reverend Barry Lynn. A former
American Civil Liberties Union lawyer, Lynn has since 1992 been the executive director of Americans United for Separation of Church and State (AU). Thus, your sentiment about Lynn most likely depends upon what you think about Americans United: that it is one of the greatest defenders of the First Amendment’s religion clauses, a crucial bulwark in protecting Americans’ precious freedom of religion; or it’s a left wing anti-faith cabal of secular humanists, atheists, and other spiritual miscreants determined to eradicate religious expression—indeed, even religion itself—from American life and culture. If the former, then the Reverend Barry Lynn is one of the nation’s “foremost champions of liberty of conscience, a modern Thomas Jefferson”; if the latter, he is (in the overblown words of the late Jerry Falwell) “lower than a child molester.”

The truth, it would seem, both about AU itself and the Reverend Lynn, lies somewhere in the middle.

The Face of AU

Regardless of your opinion of AU or the reverend who runs it, you can’t deny the impact and influence of AU and Lynn in what has been deemed (to use a somewhat outmoded phrase) the “culture wars.” Though AU predates Lynn’s tenure by almost a half century, he has certainly been the group’s most public face in recent years, as he has (according to the AU Web site) frequently appeared “on television and radio broadcasts to offer analysis of First Amendment issues. News programs on which Lynn has appeared include PBS’s News Hour, NBC’s Today Show, Fox News Channel’s O’Reilly Factor, ABC’s Nightline, CNN’s Crossfire, CBS’s 60 Minutes, ABC’s Good Morning America, CNN’s Larry King Live, and the national nightly news on NBC, ABC and CBS.” Plus, he and his organization have been involved with many of the religious liberty (and other) debates over the decades: everything from organized prayer in public schools, the creation-evolution controversy, the Ten Commandments in public places, vouchers, gay rights, and faith-based initiatives. Needless to say, the Reverend Lynn and his AU have come down almost without exception (or maybe even without exception) on the “liberal side” of the arguments.

It has been (and will continue to be) a long and raucous ride by “the man the Religious Right loves to hate.” And his new book, God and Government: Twenty-five Years of Fighting for Equality, Secularism, and Freedom of Conscience (Prometheus Books, 2015)—composed of “columns, testimony, speeches and other writings that I’ve done over the past 25 years of ‘in trench’ engagement for the preservation of the separation of church and state”—is Reverend Lynn giving his side of the ride.

Separation of Church and State

Despite all the schoolbook mythology, America’s early colonists didn’t come to the New World to establish religious liberty for anyone except themselves (and even in their own communities, the concept of “religious liberty” was radically different from what we would recognize today). The early colonies weren’t any more tolerant of religious dissent than were the Old World monarchies that they fled. By the time our Founders had the unique opportunity to create a nation in which religious conscience and practice (especially for religious minorities) could have some protection, they had plenty of reasons right here in the New World to know how crucial that protection was.

Hence, they built that protection in, or at least the precursor, which has evolved over the years to what we call today “the separation of church and state”—a principle that has worked remarkably well in the United States. The gist of it could be expressed like this: government, by nature, must work by force, coercion (it’s what is known as law); religious expression, by nature, and in contrast, must be freely given. Thus, how much better to keep them (church and state) as separate as possible?

The guiding phrase here is as separate “as possible,” which hasn’t always been easy. Hence, since the founding of the Republic, until in America’s third century, the relationship between church and state continues to challenge our nation’s commitment to religious freedom.

Enter the Reverend Barry Lynn and Americans United. Originally named Protestants and Other Americans United for Separation of Church and State, the group at first worked against government aid to parochial (read Catholic) schools, and since then has expanded to challenge what it sees as any attempt, in its eyes, to violate the establishment clause. By the time Lynn came on board, in the early 1990s, the big bogeyman had become the Christian Right and its openly stated attempts to take over the country.

It’s not hard to imagine two more opposite worldviews than AU’s and the Christian Right’s. Hence, a great deal of Lynn’s book deals with his battles against this foe on many fronts, both in court and in public opinion.

AU and the Christian Right

From the Ten Commandments being posted on public property, to prayer in school or even at government functions, to chaplains in the military, to the “war on Christmas,” AU and the Reverend Barry Lynn were in the face of the Christian Right. Early on in the book Reverend Lynn writes: “I was sitting at a Values Voter Summit, sponsored by the Heritage Foundation, the Family Research Council and a panoply of far right organizations in the fall of 2014. Speakers kept exclaiming that they wanted to ‘take our country back.’ Right. But to where: the sixteenth century?”

Lynn, in one sense, had a point; in another, he didn’t. Notice the date: 2014. In political terms this was an eon away from the 1980s, when, under the Reagan presidency, Washington, D.C. was inundated by hordes of evangelical Christians. Bibles in one hand, Francis Schaffer’s A Christian Manifesto in the other, these folks rolled into town, breathing holy fire and threatening to vote out of office anyone who didn’t vote the “biblical” position on everything from Star Wars, to aid to contras, to abolishing the Department of Education. And, at the time, they posed a real threat.

Now, though, long gone are the days when Pat Robertson, Jerry Falwell, and Ralph Reed, along with the Moral Majority and Christian Coalition, played a powerful role in American politics. And yet, reading Lynn’s book, you could get the impression nothing has changed in regard to their threat.

No question, the issues remain, and we need to be diligent. However, with not just gay rights but gay marriage practically a done deal in America, one could argue that the fearsome clout of the Christian Right and the theocracy they wanted to create has all but petered out, at least for now.

And, to be fair, the Barry Lynn and Americans United had a role in that diminution, too. And for that they should be lauded.

A Breach in the Wall

In God and Country Lynn talks about AU’s efforts in a host of other areas, such as the creation-evolution in public schools. Of course, AU was against any attempt even to question evolution, much less present even the most generic form of purposeful design. When one state, for instance, wanted to supplement evolution with creation, the Reverend Lynn wrote that AU, along with the local ACLU, “announced a lawsuit against any school district in the state that tries to implement this statute.”

And, in essence, in most cases he’s right.

Indeed, AU sometimes seems more concerned about protecting gay rights than religious ones. When the issue of free exercise comes up at all in his book, it has to do with a baker who refused, based on his Christian conviction, to bake a cake for a same-sex couple. Whatever the merits or details of that particular case, whenever this similar issue arises—which pits the free exercise of religion against gay rights—one doesn’t need to be a prophet to know which side Lynn and Americans United will side with.

Which helps explain why AU and Lynn have been castigated as one of the premier anti-religious forces in this country. It’s not necessarily a false accusation. What an amazing shift, that separation of church and state, originally created to protect religious freedom, can become an effective cover to attack it. It’s no coincidence either that God and Country was published by Prometheus Books, which for decades has been spewing out one anti-religious screed after another. The Reverend Lynn and his new work seem to fit right in.

But how could that be? He is the Reverend Barry Lynn. He was ordained by the United Church of Christ, a Protestant denomination that can often make Unitarians look a little like right-wing fundamentalists. Nevertheless, the moniker “Reverend” has proved a powerful cover for what, in many cases, is an anti-religious bias. Just as no one would expect someone with the title “Rabbi” to be anti-Semitic, who expects someone carrying the title “Reverend” to be anti-religious? But actions speak louder than words, even the word “Reverend.” And it’s certainly not hard—even for those who understand the principles of church-state separation—to see Americans United under Lynn’s leadership as going into a direction far different from the intention of its Founders (which included Baptists, Seventh-day Adventists, and Methodists).

It has been said that Joe McCarthy gave anti-Communism a bad name. Could one say the same thing about the Reverend Barry Lynn and separation of church and state? Yes, to a degree. Separation of church and state remains a noble idea, one created to protect religious freedom. Americans United appear at times to forget that this freedom also includes and depends on free exercise.