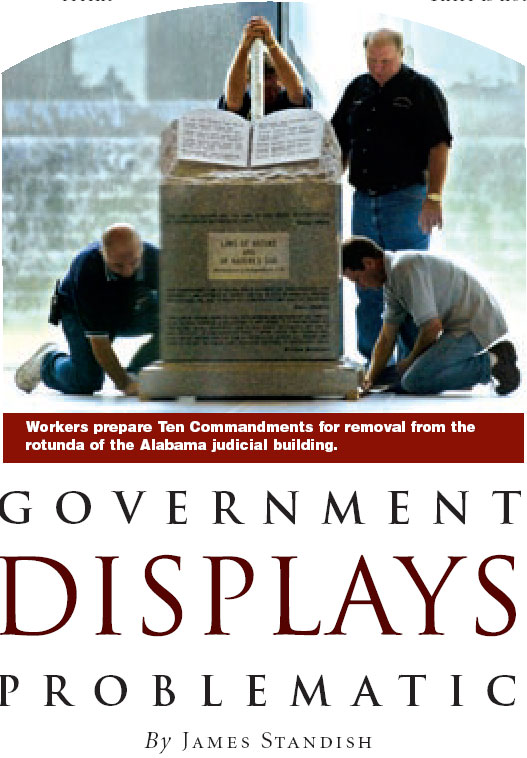 Whenever the government becomes involved in religion, it is problematic, and the posting of the Ten Commandments is no exception.

Which version? There are three widely recognized versions of the Ten Commandments: the Protestant, the Catholic, and the Jewish. If the government decides to display the commandments written out, it must choose whose version to endorse. In recent years edited versions of the Ten Commandments have been displayed. These edits exclude, for example, any reference to the Sabbath being the seventh day. This exclusion has profound theological ramifications.

What does the setting communicate? God directed that the tables of stone on which He wrote the Ten Commandments be placed in the ark of the covenant under the mercy seat, on which blood representing the atoning sacrifice of Christ was sprinkled. This setting communicated the grace of God, in providing mercy and forgiveness with judgment. The secular courthouse is a completely different context. Here, if a person is guilty, he or she must pay the price. There is no blood of Christ, sprinkled as an atonement for the wrongdoing, that sets him or her free. Placing the Ten Commandments in the courthouse setting takes the heart out of the gospel message.

Are the arguments accurate? At the heart of the arguments in favor of government Ten Commandments monuments is the claim that America's laws are based on the Ten Commandments. But is this true? If we look at the Ten Commandments, only four are commonly found in the legal code, and three of those are found in virtually all legal codes throughout history. These three are: prohibition on killing, prohibition on stealing, and prohibition on lying (American law forbids this last one in very specific circumstances). The only laws that are specifically referenced to the Ten Commandments are prohibitions on engaging in certain kinds of work on Sunday-but these are mistaken attempts to enforce the fourth commandment, which actually proscribes working on the seventh day of the week. There is nothing in our laws about coveting, making graven images, having other gods before God, forcing children to honor their parents, and blaspheming (Western nations used to enforce blasphemy laws), and little if anything left regarding adultery.

In truth, the laws of the United States developed out of a long, complex legal tradition that reaches back to the dawn of history, and includes a broad array of influences, and covers a broad range of issues not even hinted at in the Ten Commandments (e.g., everything from parking regulations to federal communications law).

*Is this the right emphasis? There can be no doubt that society has drifted away from God's law. Ironically, much of this drift has been encouraged by churches who have taught that the Ten Commandments were "nailed to the cross" and therefore are not binding on Christians today, and further, have actually taught that it is impossible for those living under God's grace to keep them. Before soliciting the state to erect monuments of the Ten Commandments, churches need to begin lifting up the law of God as fulfilled in the life of Christ and imparted to His followers by His grace.