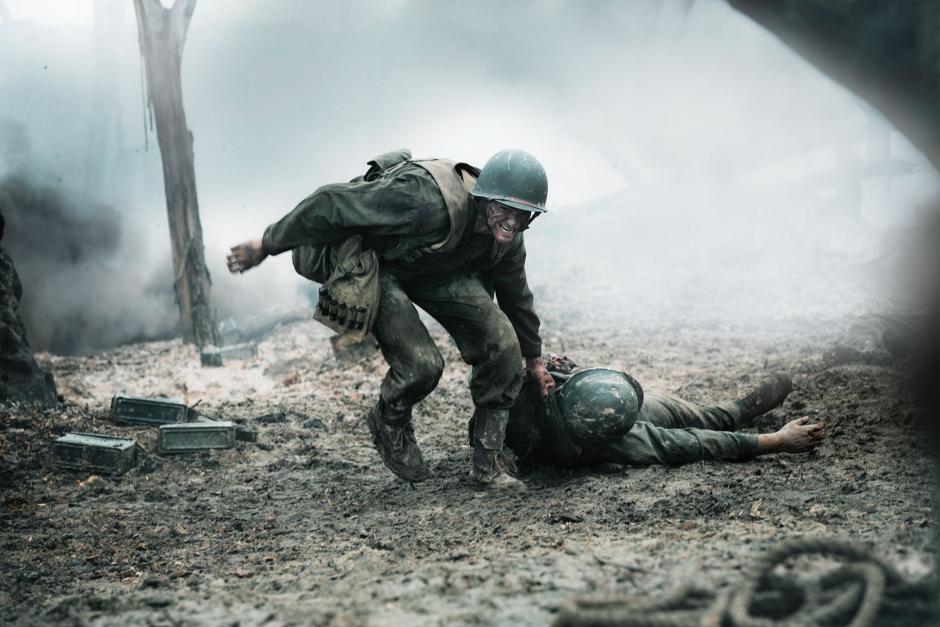 The story behind the movie Hacksaw Ridge involves a young U.S. Army medic during World War II, Desmond T. Doss, whose religious conscience recoiled at the idea of killing another human being.

The story is counterintuitive. It is a war movie directed by Mel Gibson, whose movie projects are not shy about accentuating the violent exploits of war; but it is more than that. It is a story of deep religious conviction of a hero who risked his life to save life. It is a Don Quixote-like tale with a twist—it is real, gut-wrenching, transparent, sincere, and effective. In an age that maligns religion as the source of war, this is a story of religion that abhors war, but doesn’t ignore or shun those who participate in it. Rather it seeks to redeem what is redeemable, despite the blood, the gore, and the apparent futility of trying. It is a story that is new to this generation but one that illustrates old values of faith, endurance, and duty to God and to humanity. It is a story that raises, yet again, the noncombatancy of those few religious souls among us who are willing to give up public approbation as patriotic warriors and instead submit to the public shame or ridicule that often comes with refusing to bear arms in what the politicians and many churchgoers often say is a “just war.”

Desmond was the unlikeliest hero: a loner who grew up in a home with an alcoholic father whose mother took him to church every Saturday morning. She was an ardent Seventh-day Adventist Christian, who ensured that her children were faithful in keeping the Ten Commandments. It was seeing the illustrated Ten Commandments on the wall of his family home that led to Desmond’s refusal to bear arms when he was called up to serve during World War II. He remembered the drawing, next to the sixth commandment, that illustrated Cain killing his brother, Abel. How could a brother do such a thing? Desmond thought—and he committed himself never to kill another human being.

By all accounts Desmond was a loner. He was introspective. Life was serious, and so was he. Everything about him was nonconforming. His faith community was relatively unknown. He worshipped on a different day than most Christians. He did not drink alcohol or smoke or become involved in the extracurricular activities that many of his classmates were accustomed to. Such awkwardness was not unusual for Desmond. He saw it as part of who he was—not that he was better than anyone, but his motivation was from a deep religious commitment to do the right thing, no matter the consequence. Such a commitment would serve him well on the front lines in Okinawa.

When Desmond was drafted, he refused the rifle. The military was of the view that he should go to a work camp for conscientious objectors, but he refused. “I tried to explain that I was a conscientious cooperator” was how he put it. He sought a place in the medical corps. He wanted to be placed where he could save life, not take life. Eventually the Army did find him a spot with the Medical Detachment, 307th Infantry, 77th Infantry Division.

During the many months of training Doss, was looked upon as strange. Ralph Baker, a litter bearer, noted that Doss “didn’t have friends because he was too much out of the mainstream.” In fact, John Centola, the company scout, noted that “a lot of people thought he was putting on an act. What kind of religion tells you that you can’t do this, you can’t do that?” The ribbing Doss received from his fellow soldiers while in the United States was soon to change when in battle. Many would come to owe their lives to this brave “religious nut.”

It was Doss’s bravery in saving the lives of his fellow soldiers near Urasoe Mura, Okinawa, Japan, from April 29 to May 21, 1945, that became legendary. It is now the subject of the major motion picture Hacksaw Ridge, directed by Mel Gibson. For Gibson, Doss’s exploits were nothing short of “inspirational.” Gibson continued: “To walk into the worst place on earth . . . without . . . a weapon and . . . do his job . . . as a corps medic and save so many lives is remarkable.”1

Reading the Army’s citation of those events, you would think, if you did not know better, that you were reading fiction. When his battalion “assaulted a jagged escarpment 400 feet high,” “a heavy concentration of artillery, mortar and machine-gun fire crashed into them, inflicting approximately 75 casualties and driving the others back.” Doss remained on top of the escarpment amid enemy fire and carried all 75 casualties “one by one to the edge of the escarpment and there [lowered] them on a rope-supported litter” to safety. One can only imagine what was going through Doss’s mind during this heroic act. In Terry Benedict’s documentary The Conscientious Objector Doss said that as he delivered each wounded man he prayed, “Lord, please help me get one more,” and off he trudged through the hail of bullets for the one more—75 in total.

A few days later, on May 2, “he exposed himself to heavy rifle and mortar fire in rescuing a wounded man 200 yards forward of the lines on the same escarpment”—but that was not all. Two days later “he treated four men who had been cut down while assaulting a strongly defended cave.” To do so, he had to go through “a shower of grenades to within eight yards of enemy forces.” There “he dressed his comrades’ wounds before making four separate trips under fire to evacuate them to safety.” This behavior continued almost daily.

Commander Jack Glover, who had told Doss in training, “You’re not going to be by my damn side if you don’t carry a gun,” was now faced with a medic on the frontline in “combat after combat, action after action” who “just absolutely [refused] to allow wounded soldiers to not be treated, refusing to withdraw under any circumstances.” He marveled that Doss “was absolutely fearless as to what was going to happen to him.” Glover was among those whose life was spared because of Doss’s action during the Okinawa campaign. Despite the small-arms fire, the shells falling, Doss reached Glover, attended to him, and then carried him to safety.

Unfortunately, it was on the night of May 21 that Doss’s heroics would come to an end. He again “fearlessly” risked his life when a grenade was thrown into the pit where he was tending to a wounded soldier. He purposely put his foot on the grenade to shield the soldier. The explosion ripped through Doss’s legs. He “waited five hours before litter bearers reached him and started carrying him to cover.” However, as he was being carried off the field he noticed a more critically wounded man and told the bearers to take that man. While he waited for the litter bearers’ return, he was struck by a sniper bullet and “with magnificent fortitude he bound a rifle stock to his shattered arm as a splint and then crawled 300 yards over rough terrain to the aid station.”2

Doss’s unflinching courage gained the admiration of all his comrades. When he was lowering the 75 wounded that day in Okinawa, the men below were wanting to know who was behind all of these men getting down to safety. “Some nut up there is getting his butt shot off” was the reply. “What a beautiful nut, huh?” said Glover.

When Desmond was about to be put on an evacuation ship, he realized that his pocket Bible was missing. A number of volunteers risked their own lives in the line of fire to find his Bible—it took some searching, but the Bible was found and returned.

While the Doss story took some time to receive worldwide exposure, its underlying themes are as old as Christianity itself. What should be the Christian response to war? Ancient Christian writers such as Tertullian said that when Christ disarmed Peter He “unbelted every soldier.”3 However, many scholars today note that the conversion of Constantine to Christianity led to a shift in the Christian thinking on war. Theologians Ambrose and Augustine developed what has become known as the “just war doctrine.”4 The idea was that war became “just” when two overarching criteria were met: jus ad bellum, the parties had a justifiable right to go to war; and there was a jus in bello, that is to say, the carrying out of the war would be “just,” not overly brutal.

The brutality of war has become an issue of some debate. Many writers suggest that “wars were not always as deadly and bloody as they tend to be today.”5 Augustine pointed out that “the real evils in war are love of violence, revengeful cruelty, fierce and implacable enmity, wild resistance, and the lust of power.”6 In Augustine’s day war was sometimes more akin to a pushing match, not always a wholesale slaughter. The goal of battles was to make the opposing army slaves. However, scholars have noted that from about A.D. 1500 to 1800 there was a military revolution in Western Europe—killing the opponent became the primary focus, rather than catching the enemy for slavery. 7

By the time the twentieth-century wars were unleashed upon the earth, the slaughter of both the innocent and the combatants was unprecedented. While today in the twenty-first century some nations try to use superior technology to target only combatants, war remains brutal. A prime example is the human suffering in the Middle East. We are also living in a culture that glorifies violence and demands revenge. The current “war on terror” presents one example after another in which vengeance is sought. ISIS kills a Jordanian pilot, and Jordan bombs ISIS targets and hangs a female terrorist in retaliation.8 A Russian plane is shot down in Syria, and Russia hits back all the harder. Tit for tat remains the modus operandi in carrying out war.

Desmond Doss stands out as one who saw no Christian justification for war. War was, in his mind, evil by definition. No one has a right to kill another, any more than Cain had the right to kill Abel. For Doss his conscience was supreme. No state power could compel him otherwise. Jack Glover noted that if Doss “had been without the belief and without the religious commitment, I think he would have been much less of a person doing his duty.” In Benedict’s documentary Doss said, “I was fighting for freedom by trying to save life instead of taking life, because I couldn’t picture Christ out there with a gun killing people. I like to think of Him out there with an aid kit like me.”

If there were a draft today, and if Desmond Doss were alive and young again, I can envision him on the fields of Syria, among the ravages of Iraq, or on the hills of Afghanistan, tending to the wounded. He left the politics of war to the politicians, the ethics and morality to the theologians and philosophers. His job was to save life. “You can’t always win,” said Doss, “but when your buddies come to you and say they owe their life to me, what better reward can you get than that?”